Prestigious scientists and leaders of organisations devoted to biodiversity conservation have launched an initiative to promote a new approach to agriculture. 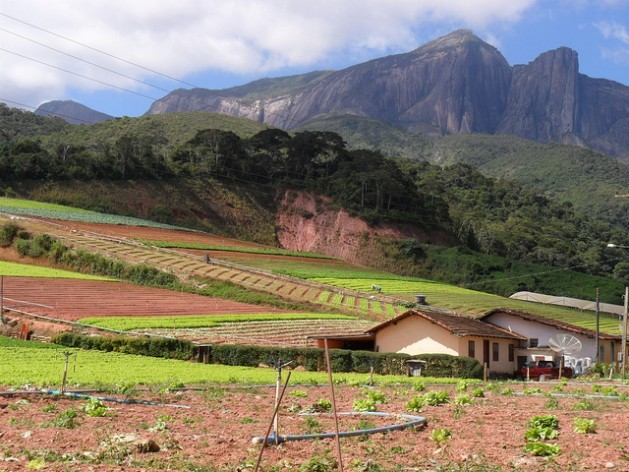 A family farm in the state of Rio de Janeiro, with a crop system adapted to the local impacts of climate change. Credit: Fabiola Ortiz/IPS

RIO DE JANEIRO, Aug 25 2013 (IPS) - It took Brazil four decades to overcome food insecurity and earn a place as a major global food supplier. Now its experiences will contribute to the evidence base for a new initiative that seeks to reconcile agriculture and the conservation of biological diversity.

“Although there are some who consider Brazilian agriculture to be aggressive and destructive, we want to share another vision for the rest of the tropical belt, which is home to the poorest countries and those who suffer the greatest food insecurity,” Maurício Lopes, president of the Brazilian government’s agricultural research agency EMBRAPA, told Tierramérica*.

The Bridging Agriculture and Conservation initiative was launched in July in Rio de Janeiro by a group of global agricultural, conservation and sustainability leaders. Lopes was one of them.

The Brazilian Foundation for Sustainable Development (FBDS) and Bioversity International, a non-profit research-for-development organisation based in Rome, created the initiative.

The goal is to gather, over the course of two years, scientific evidence from the work of 25 researchers in different parts of the world, and present the international community and governments with economically viable measures.

“Brazil managed to transform large tracts of poor and arid soils into fertile areas. That was our first revolution,” said Lopes. “Then we ‘tropicalised’ crops: we brought genetic resources from different parts of the world and created the concept of tropical agriculture.”

The current challenge for Brazil is to promote another revolution integrating agricultural and forestry systems.

“The country still has 60 percent of its natural virgin forests, and we want to keep them that way, by managing them intelligently. No other country has an agricultural sector that is moving so determinedly towards sustainability as Brazil,” he added.

EMBRAPA estimates that between 50 and 60 million hectares of degraded pasture land – areas that were occupied between the 1970s and 1990s – have now been rendered productive again through recovery technologies.

“Most of the developing countries in Africa have been given only solutions based on the classical industrial model of agriculture,” explained Emile Frison, the former director general of Bioversity International. However, he noted, “the majority of the farmers are small-scale farmers and the solutions that have been provided so far have not addressed their needs. They are still poor.”

There are no “magic solutions” that can be applied everywhere, so what is needed is a new approach in which scientists and farmers work together, he told Tierramérica.

The aim of the new initiative is “to look at different solutions that can help solve more than one equation, both local and global. We can identify production practices that can conserve biodiversity, reduce environmental impact and maintain or improve yields. We can identify crops that will improve nutrition and provide ecological services,” Tutwiler told Tierramérica.

The Bioversity International director criticised the “artificial division” between the nature conservation community and the agricultural sector, which is responsible for supplying the world’s population with food.

One point that everyone agrees on is the need for an agenda with incentives and government policies.

“If we don’t have that supporting policy in environment and agriculture, it is very hard to engage business, farmers and others,” said Tutwiler.

Between 2005 and 2008, the pioneering International Assessment of Agricultural Science and Technology for Development (IAASTD) was carried out, resulting in a final report signed by 60 governments which called for the promotion of policies guided by the best scientific knowledge available. Nevertheless, the initiative soon fell into oblivion.

The president of the FBDS, Israel Klabin, believes that the IAASTD and the policies recommended were definitely a step in the right direction.

In his view, the assessment “served to inform new policies in several countries and certainly in the UN agencies, the GEF (Global Environment Facility) and the World Bank,” Klabin told Tierramérica. However, the added, “the process of transformation is a long-term process and needs to be continuously reinforced.”

“We are seeing several global efforts and initiatives underway such as soy and beef roundtables, which are multi-stakeholder initiatives involving the mainstream industry aimed towards responsible production that does not harm nature or people,” he noted.
After a lengthy consultation process, the IAASTD report presented different options and scenarios. It highlighted the need to rethink agricultural science not just to achieve yield gains and lower costs for large-scale farming, but also to focus agricultural research towards the needs of small farmers in diverse ecosystems and to areas of greatest needs.

Klabin stressed that a key difference between the IAASTD and the newly launched initiative is that the latter is a bottom-up effort, guided by scientists, business and organisations devoted to these issues, as opposed to a top-down initiative driven by governments or the UN.

“Our initiative is based on studies backed by the best existing science in terms of both agricultural technologies and environmental considerations, including climate change, the decarbonisation of the agricultural sector, and changes in the use of fertilisers, of which the most harmful are nitrogen fertilisers,” he said.

According to Tutwiler, “it is important to engage the large farmers. There are some things that they can do to change their practices and make better use of biodiversity. There are solutions, but you have to change the mentality.”

For her part, Marion Guillou, a board member of the Consultative Group on International Agricultural Research (CGIAR), believes the first step will be to overcome obstacles, challenges and risks.

“Then we have to choose what we will do as an original body and choose the nexus between agriculture and biodiversity. We will gather scientific evidence of where we should insist and then a set of recommendations,” she said.

The group will meet at international community forums and hopes to influence discussions on the Millennium Development Goals, climate change and the Convention on Biological Diversity.

“We will be having discussions in international forums in the next years, and we will have something to say. We know it will take two years to gather all that,” said Guillou.

For U.S. biologist Thomas Lovejoy, the man who introduced the term biological diversity to the scientific community in 1980, the novelty of the new initiative is the integration of conservation and agriculture to avoid a conflict that could be detrimental to both the planet’s future and agricultural production itself.

The idea is to look at agriculture as embedded in a natural landscape, added Lovejoy, the biodiversity chair of the Heinz Center for Science, Economics and the Environment.

“We need to produce tighter systems. The ideal agriculture is the one that doesn’t produce any waste or pollution. This is a really serious issue in agriculture worldwide and it ends up going to hydrological systems and coastal waters, creating dead zones without oxygen,” Lovejoy told Tierramérica.