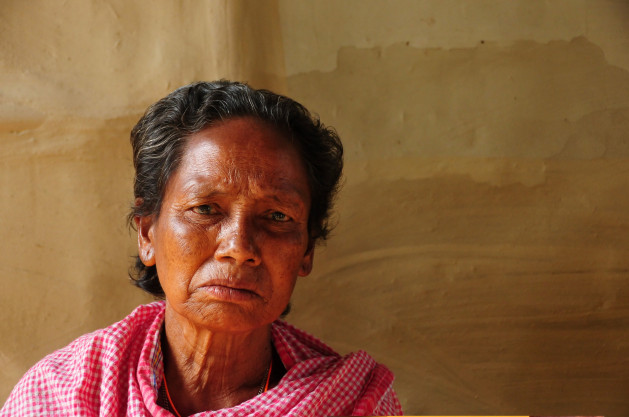 Adhri Rajbanshi, 70, from Jhapa district in eastern Nepal has been looking for her missing son since 2003. Credit: Amantha Perera/IPS.

COLOMBO/KATHMANDU, Oct 17 2013 (IPS) - Some call it ‘frozen loss,’ a point in time that families and relatives find almost impossible to extricate themselves out of, even years after their loved ones have disappeared.

“The families of the missing get into a [state of] tunnel vision,” says Bhava Poudyal, mental health delegate for the International Committee of the Red Cross (ICRC) in Azerbaijan. He is talking about the thousands of families still searching for their loved ones who have gone missing in his native Nepal, or in Sri Lanka, Azerbaijan and dozens of other countries.

It’s a situation that does not let go of its captives easily. “Their lives are dominated by the missing, there is no release,” he tells IPS. “They live with the ambivalence of hope and despair day in and day out.”

“Everyone seeks answers all the time, the state of ambiguous loss is torture."

It’s a condition Santhikumar, a bicycle repairman in his forties in Oddusudan village of the Mullaitivu district in Sri Lanka’s Northern Province, is all too familiar with. It has been four years since his brother-in-law went missing during the final stages of the Sri Lankan military’s war against the rebel Liberation Tigers of Tamil Eelam in April 2009.

Santhikumar has been helping his sister and her two daughters make ends meet even as he joins them in the search for the breadwinner of their family. He has visited every official detention centre in the north and nearby areas, but with no luck so far.

“People come and tell us that they saw him on this location on this day. So we go looking for him there,” he says. “But we have not found anything concrete yet.”

The family has got used to the never-ending search, he adds. “There are good days and bad days. Mostly we are okay, but there are days when my sister just stares aimlessly for hours, or when her daughters break down crying. Birthdays are the hardest, the girls have so many memories of appa (father).”

Some 2,300 km and a whole country away, Rena Mecha shares the same feeling of despair in the Jalthal village of Jhapa district in eastern Nepal. The 36-year-old mother of a boy and girl, 16 and 14 respectively, has been searching for her husband who went missing during the pro-democracy movement in the country in 2006. “I lost everything when he went missing,” she tells IPS. “Nothing can bring that life back.”

The current ICRC documentation shows that around 1,400 people have been missing in Nepal since the 2006 peace agreement. In the country’s rural areas, the wives of the missing men desist from calling themselves widows, as that would entail a whole new set of complications, like having to dress in white and being considered a ‘bad presence’ by others.

In southern Sri Lanka too, the immediate community has ostracised women who have accepted that their missing husbands are dead, accusing them of betraying their husbands, says Ananda Galappatti, a medical anthropologist who works with the families of the missing in the country.

In Azerbaijan, says Poudyal, many families continue to cook meals and set a plate for a missing person even long after their disappearance. Close to 4,600 people went missing during the Nagorno-Karabakh conflict between the republics of Azerbaijan and Armenia after the collapse of the Soviet Union in 1991.

“It is the constant state of waiting which makes closure very difficult, if not impossible,” Zurab Burduli, the ICRC protection delegate in Sri Lanka, tells IPS.

Galappatti says the families are assailed by an identity crisis that can be exacerbated by the social environment. “Am I a married woman or a widow? Am I a child without a father? Am I a parent whose daughter is dead?  Planning for the future becomes extremely difficult in this situation,” he tells IPS.

In Sri Lanka, the number of missing persons is a contentious issue. A presidential task force set up to investigate the southern insurrection by the Janata Vimukhti Peramuna (JVP) in the late 1980s recorded at least 30,000 cases of missing people in 1995. The ICRC has a current caseload of 16,090 missing persons in Sri Lanka dating back from 1990.

According to Burduli, the first step in assisting these families is to recognise their complex situation and devise assistance plans targeting them.

“The ICRC’s experience around the world shows that because of the complexity of the needs and their multi-disciplinary nature, coordinative national mechanisms are best suited to address those needs in a comprehensive and consistent manner,” he says.

In Nepal, the families of the missing admit that once the national tracing programme began following the 2006 peace agreement, their situation improved slightly.

“I was the only one in my village with someone missing, I felt so alone,” says Mecha. “Now at least there are people who understand my situation.”

Grassroots groups provide families psychosocial support here, something that is yet to take root in Sri Lanka.

“It is imperative that any public process also includes the psychosocial accompaniment of families – with sensitive and skilled practitioners on hand to support families as they prepare for or go through these processes,” says Galapatti.

At the same time, officials with the Nepali Red Cross who work as tracing officers warn that the process of dealing with the families is slow and time-consuming.

“Everyone seeks answers all the time, the state of ambiguous loss is torture,” says Shubadhra Devkota from the Nepali Red Cross.