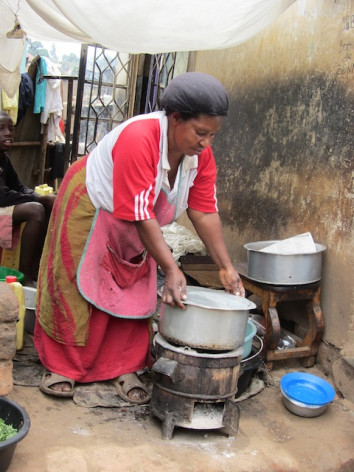 A woman in Uganda’s Katwe slum uses an improved, energy-saving stove to reduce charcoal use. Energy-saving stoves are being distributed in Uganda as part of emission-reduction projects. Credit Wambi Michael/IPS

Delegates, mostly from Africa and developing countries, fear that the CDM will fail if a special fund is not established to help it overcome the effects of the European economic meltdown.

Fred Onduri Machulu, former chairperson of the LDC expert group with the United Nations Framework Convention on Climate Change or UNFCCC, told IPS: “There are genuine reasons for a CDM rescue plan. We need to cushion the CDM from current and future shocks instead of letting it die at a time when it is beginning to function.”

He said the private sector was losing confidence in the CDM because of the low prices of Certified Emission Reductions (CERs).

The CDM has registered over 7,400 emission-reduction projects in developing countries since 2004 and generated over 1.2 billion emission credits. However, it has been jeopardised by the fall in CER prices. CER credits have come down from over 15 dollars in 2011 to about 40 cents currently.

Machulu admitted that the CDM was fairly complicated for some LDCs in Africa, Asia and the Caribbean, with many African countries lacking the capacity to develop and process projects that could qualify for funding under the CDM.

But he insisted that these projects have had a positive impact on the livelihoods of people and communities.

Dr. Tom Okurut, executive director of Uganda’s National Environment Management Authority, told IPS that the future of the CDM remained uncertain unless a rescue plan was urgently put in place.

“In Uganda we have registered eight municipalities under the CDM for waste management. By the time we registered, the price for carbon was very good. But now the price has fallen to its lowest. And that is why the CDM needs to be rescued. More especially when we see more LDCs projects being registered,” he said.

In June, consultancy Vivid Economics stated in its report “The market impact of a CDM capacity fund” that about 2.5 to three billion euros may be needed to stabilise the CDM for the next several years.

Christiana Figueres, executive secretary of the UNFCCC, has previously said that a lack of political ambition to tackle climate change by some developed countries has led to the lack of demand for CERs.

And executive director of Tanzania’s Institute for Environment, Climate and Development Sustainability Joachim Khawa told IPS that some nations attending the current U.N. Climate Change Conference in Warsaw were determined to ensure that the CDM was weakened to pave the way for a so-called new international market mechanism (NMM) in carbon trade.

At the 2011 U.N. Climate Change Conference in Durban, South Africa, parties decided that the NMM should be established to complement the CDM. Details of how the new mechanism will work are part of the discussions at Warsaw.

However, some groups are opposed to the idea of a CDM rescue fund saying the LDC group should instead focus on pushing for the quick implementation of the Green Climate Fund.

The Green Climate Fund is supposed to channel 100 billion dollars a year in public and private financing to developing countries by 2020.

Shewangizaw Kifle Mulugeta, a project manager with the Ethiopian Railway’s climate financing project, told IPS that most LDCs feared that sectorial approaches being pushed by the European Union could create new trade and economic barriers for developing countries in the carbon market.

“Our position is that the CDM should not be disrupted because it will have adverse effects on some of the projects that have been approved or are in the pipeline,” said Mulugeta.

Figueres told journalists in Warsaw that her secretariat was committed to ensuring that the CDM’s integrity was maintained because of the gains made in lowering mitigation levels.

She said that the CDM has not only had an important impact on developing countries through technology transfer, but it had also encouraged industrialised nations to increase their emission reduction targets by making mitigation more affordable.