For Better or For Worse – Fracking in the Rustic Karoo 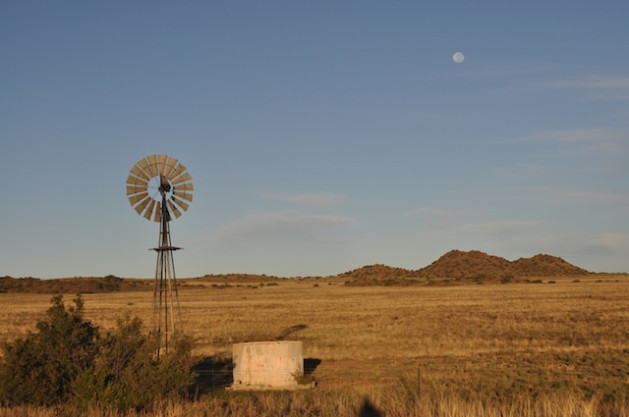 KAROO, South Africa, Nov 25 2013 (IPS) - To the casual passer-by, Petrus Kabaliso and his wife Cynthia present a disarmingly rustic sight, seated as they are under the shade of a date palm at a truck stop in the scorching Karoo desert, in South Africa’s Northern Cape province, a battered umbrella held jauntily over their heads.

“We find it very hard to live here,” Petrus, 59, tells IPS. “We find old metal, and sometimes the trucks that stop here leave bottles in the rubbish. We can change this for money, and buy pap [maize meal porridge] and sugar.”

Colesburg is more prosperous than many little Karoo towns. Trucks and cars ferrying people from up country to the coast make regular use of it as a stopover. Bed-and-breakfasts line the streets, with vacancy signs on display. But its wealth is relative: like most towns in the Karoo, the very lack of economic prospects is what has kept it away from the attention of developers.

But all this could change. There are plans to exploit potentially vast shale gas reserves under the earth here through hydraulic fracturing or fracking.

According to a study by financial research organisation Econometrix on behalf of energy multinational Shell, up to 480 trillion cubic feet of gas is available. To put this into context, Mossgas – the gas-to-liquids refinery situated on South Africa’s south coast – has provided five percent of the country’s fuel needs over the last 20 years using only one trillion cubic feet over this time, according to PetroSA, the refinery’s operators.

According to Econometrix, to exploit just 10 percent of the gas will create 700,000 new jobs.

But it has generated substantial controversy, with much of the debate focussing on how it will alter the Karoo landscape, some 400,000 square kilometres in central South Africa, which many believe should be left unspoiled.

“It will be better for all of us,” Ricardo Josephs, a petrol pump attendant in the picturesque town of Graaf Reinette, two hours from Colesburg, tells IPS. “Creating new jobs will mean my friends and family can come home. Everybody here is losing people who move to Cape Town or Jo’burg looking for work. Our people are all over and they don’t come back.”

Josephs concedes that the industrialisation of the Karoo may change its nature. “It will be a problem for the rich guys, the farm guys. They don’t want it to change. But for me, and the guys in the street, it will mean more jobs and better pay.”

Around 63 percent of the people in the Karoo live on or below the poverty line, Professor Anthony Leiman, an environmental economist at the University of Cape Town, tells IPS. “The finding of gas is like the discovery of gold all over again. It will profoundly change the future of the country.”

He notes that such large resources will inevitably disrupt life in the Karoo. In North Dakota, a sparsely-populated state of the United States, the discovery of large-scale gas reservoirs has turned life in many small towns upside down. The flood of male gas workers has seen towns swell to 10 times their population, and a rise in social problems from drug abuse to prostitution.

So far, much of the criticism has focused on possible environmental contamination, particularly of the Karoo’s scarce groundwater. The fracking process involves pumping thousands of litres into fissures kilometres below the ground. This fractures the rock, allowing gas to seep into a central well that carries it to the surface. In the U.S., incidents of badly prepared wells have led to groundwater contamination.

But Leiman dismisses this as a significant threat. “Poverty is a far greater hazard to the environment than fracking.”

Not so, counters the Treasure the Karoo Action Group (TKAG), the main lobbyist organisation campaigning against the extraction of shale gas. The organisation claims the long-term consequences, particularly water pollution, will fall hardest on the poor.

Up to 20 million litres of water are needed per well in the fracturing process, says TKAG, which will put the gas companies in competition with locals for an already scarce resource.

A bigger issue, say opponents of the process, is possible pollution of the water table. The water injected into underground wells is laced with chemicals to aid the process. This, say critics of the technology, risks contaminating existing ground water reserves. Elsewhere in the world contamination has led to illnesses in humans and cattle, especially due to BTEX chemicals – a group of chemicals derived from petroleum – known for causing endocrine disruption and cancer, says TKAG.

In September, South Africa’s Minister of Water and Environmental Affairs Edna Molewa declared fracking a “controlled activity”, effectively compelling gas companies to obtain a separate licence from her department. This will go some way to controlling water use by companies in the area, but critics are unlikely to be satisfied with this.

The TKAG also takes issue with the social disruption gas extraction will bring. Jeannie le Roux, the TKAG’s director of operations, tells IPS the experience in shale gas rich areas in the U.S. has been severe social disruption, a point Leiman agrees with.

Alcoholism, drug abuse, prostitution and social vices are quick to follow where young men with money, and not a whole lot to spend it on, are found.

“The social impact on a boom town brings lots of problems,” Le Roux says. “And the advantages it brings don’t last. Mining is a boom-bust activity. When the boom ends, the area is left with surplus labour.”

Although jobs will doubtlessly be created, Le Roux questions the benefits to affected communities. “History shows that the riches of mining seldom reach the people on the ground. Instead they end up with companies, and when the resource runs out, they depart, leaving the environmental degradation that local communities have to live with.”

It need not be this way, says Chris Nissen, chairman of the Karoo Shale Gas Community Forum, set up to represent the region’s poor in the fracking debate. The organisation was established a year ago to counter what he calls the “voice of the wealthy” who are fighting development of the region, Nissan tells IPS.

Nissen believes that vigorous enforcement of South Africa’s environmental laws can protect the landscape; and proper planning for the influx of migrant workers that could swamp small towns would ensure many potential problems could be averted.

“The Karoo is beautiful, but it is also a very sad place. In winter, you see children walking to school bare without shoes, through the frost.”