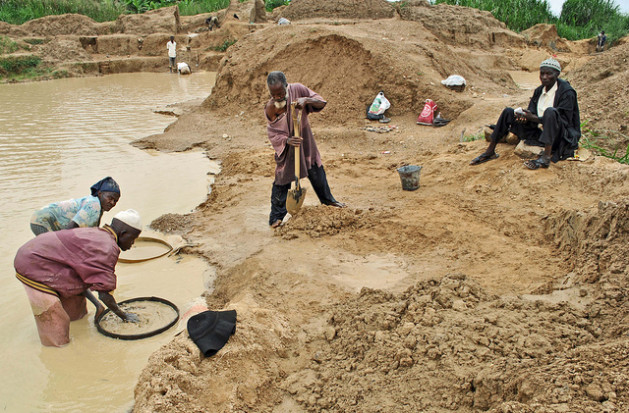 WASHINGTON, Nov 12 2013 (IPS) - Countries in Africa’s Great Lakes region are moving too slowly on an international plan to certify the sourcing of “conflict minerals”, researchers here are warning, a failure that could threaten the entire certification process.

Recent international efforts have made important gains in cutting off militants in Rwanda, Congo and neighbouring countries from mining profits, while bolstering focus on ensuring clean supply chains, particularly in the global electronics industry. Today, for instance, far fewer rebel groups are present in mines in eastern Congo, according to new analysis by the Enough Project, a Washington advocacy group.

"The heart of this process is asking companies operating in the region to take responsibility for their supply chains." -- Annie Dunnebacke of Global Witness

Yet several key components of an international initiative aimed at systematising the global traceability of these “conflict minerals” have yet to be fully set up by the region’s governments. In a new report, the Enough Project suggests the certification process is today at a “crossroads”.

“Minerals can be a boon for peace in Congo and the region, not a conflict curse,” Sasha Lezhnev, a senior policy analyst with the Enough Project, said Monday.

“But if Rwanda, Congo and regional states do not take urgent steps to complete the mineral certification process in the next few months, multinational companies may stop purchasing many minerals from the region that cannot credibly be certified as conflict-free.”

One key deadline in this regard is now just months away. In May 2014, a landmark U.S. regulation will start requiring all U.S.-listed corporations to publicly report on the provenance of a list of minerals coming from the Great Lakes region.

And even as this U.S. provision – known as Section 1502 of the Dodd-Frank Act, massive financial sector overhaul legislation passed in 2010 – has proven to be a major global impetus, the European Union is currently working on similar legislation.

“Over the past two years, we’ve certainly seen increased interest by companies to strengthen the level of minerals traceability. Our member companies have been putting a lot of resources into due diligence, carrying out a tremendous amount of tracing very far up the supply chain,” Julie Schindall, director of communications at the Electronic Industry Citizenship Coalition (EICC), an initiative that focuses on auditing smelters and refiners, told IPS.

“Yet it would be unfair to say that every company is doing this only due to action by regulators, though pressure from government, civil society and consumers is all vital. Companies also believe this matters, and some have been working on these issues far longer than they’ve been mandated.”

The Enough Project’s warning comes just as a major conference is set to take place, later this week in Rwanda, among an international group of experts on responsible mineral supply chains.

Just ahead of the meeting, the certification process reached something of a milestone, with Rwanda last week issuing its first conflict-free certificate, known formally as an International Conference of the Great Lakes Region (ICGLR) Mineral Export Certificate. (Unlike the EICC, this certificate aims to audit operations at the level of extraction.)

The Congo government is reportedly preparing to do the same soon.

Yet there are concerns that these certificates have been prepared without mandated safeguards being in place. Enough Project researchers note that the process by which these initial certificates are being offered are “ad hoc”, with the governments focusing on mines that are particularly easy to certify.

“Interim steps will not work for all mines,” they write.

In the half-dozen years since the ICGLR Regional Initiative against the Exploitation of Natural Resources (RINR) was created, a rudimentary mine inspection system has been created and is partially functioning. Yet other important components of this framework – including a regional database to allow for the tracking of minerals from individual mines, disclosure requirements and critical auditing and monitoring systems – have yet to be finalised, in addition to more general deficiencies in capacity and public support.

While the governments of Rwanda and Congo have put in place interim measures to address some of these systemic gaps, these have been criticised for lacking transparency.

“Right now it’s a bit of a case of putting the cart before the horse – if you want a certification to be credible, then safeguards and monitoring have to be in place before you launch it,” Annie Dunnebacke, deputy campaigns director at Global Witness, a watchdog group that has been a key proponent of the ICGLR certification initiative, told IPS from Rwanda.

“At the same time, if this system launches before it’s ready, and at some point down the road is certifying actual conflict minerals, then we have a problem. The credibility of the system is the most important component.”

Yet Dunnebacke cautions advocates not to lose sight of the central priority: private sector due diligence. She says focus on this responsibility will ease concerns over the possibility of companies turning away from the region.

“The heart of this process is asking companies operating in the region to take responsibility for their supply chains, to identify and mitigate risks. Private sector players have to prove they’re carrying out due diligence,” she says.

“But companies can carry out due diligence, and can also source from the region, even if a fancy certification process is not up and running.”

Ahead of this week’s meetings in Rwanda, the Enough Project is now urging the United States, European Union, World Bank and electronics companies to strengthen technical assistance in several areas, in the hopes of expediting the formation of central components of the certification processes.

The World Bank has recently created a new project, the Africa Extractive Industry Trust Fund, through which it says it aims to work with African countries to provide advice on how to negotiate “fair and equitable contracts and deliver transformational development benefits.”

But the Washington-based development institution emphasises that certification remains a key requirement.

“Channelling revenues from Africa’s minerals into significantly improving people’s lives is an essential development investment in the continent’s future,” a bank spokesperson told IPS, “and so effective certification and traceability are vital steps in this process for countries, especially in the Great Lakes region.”