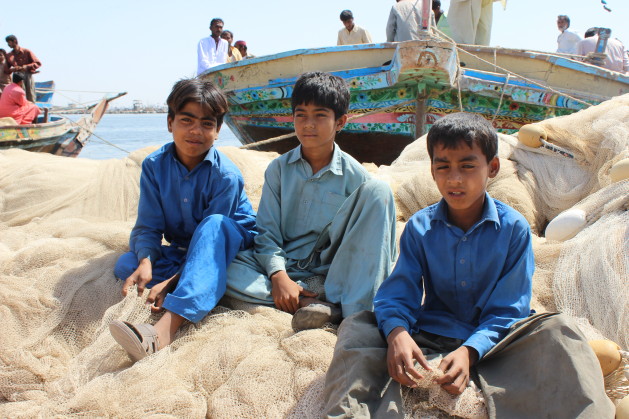 Out of school children in Ibrahim Hyderi, a fishing community near Karachi. Credit: Zofeen Ebrahim/IPS.

These are schools on paper, but really are sometimes enclosures to keep animals. Or, spaces for the locally powerful.

Balal, 35, chairperson of the Sindh Rural Development Society, a network of 40 grassroots organisations, has been pursuing education officers mostly in and around Hala city in Sindh province in southeast Pakistan to show them the schools that don’t exist.

“There are animals kept in schools, and the buildings have been turned into stables. This is what we are doing to our children when education is a constitutional right.”

The education department paid no attention to his complaints, and some three years ago, he decided to stand outside the homes of politicians wearing black arm bands with a group of friends, or go to events where the the politicians would be invited as guests. “They listened but did absolutely nothing, because there was no pressure from the parents,” he said.

Last year his group decided to use digital technology. “We got the community involved and whenever we heard of a ghost or non-functional school, hundreds of text messages would be sent from different numbers to the MP.”

As a last resort, Balal decided in January this year to move an application in the Supreme Court asking the Chief Justice to take notice of the “pitiable condition” of education in Sindh, with particular reference to ghost and non-functional schools.

Through text messaging, he asked local community-based organisations and individuals to send in details of such schools. “Within ten days, we had made a list of 1,300 such schools all over Sindh.”

The Sindh High Court conducted a fresh survey and reported to the Supreme Court earlier this year that there were some 6,721 such schools owned by the government, and for which it even disburses funds.

“There are animals kept in schools, and the buildings have been turned into stables,” Chief Justice of Pakistan Iftikhar Muhammad Chaudhry observed on Feb. 11 this year while hearing a petition filed by Balal. “This is what we are doing to our children when education is a constitutional right.”

Balal is still awaiting a legal resolution. “I would like to see all those who have been sponging off the government to be held accountable,” he told IPS.

“Ghost schools, especially, are equated with corruption, particularly with teacher absenteeism, when that is not always the case,” she told IPS. “Some of the teachers of these very schools may still be teaching and drawing an honest paycheck, but posted by their supervisor elsewhere under pressure from a higher up.”

She admitted it could well be the case that teachers get themselves transferred to a more convenient area.

“Posting female teachers to far-flung village schools when there is no public transport is the first step to throw a spanner in the career of even the most dedicated and committed of teachers,” she told IPS. She blamed the centralised recruitment policy where government-employed teachers can be posted anywhere.

According to Transparency international’s Global Corruption Report on education presented on Oct. 1 in Pakistan, some teachers work in collusion with education administrators to “falsify reports on the functioning of schools” while actually working elsewhere.

The problem of teachers not showing up for work, or schools turning into cattle pens, lies with the government’s skewed education policy, said Salahuddin.

The government system of building schools on land donated by the community is one of the reasons, she said. “In rural Sindh, which I know best, land belongs to a handful of powerful people, and when they part with their land, there will always be strings attached, influence wielded and interference.”

As things stand today, Pakistan will not be able to meet its target on education for the Millennium Development Goals (MDGs) by 2015. Nor will it be able to achieve the goal of universal primary education as sought in the Dakar Declaration 2000, to which Pakistan is a signatory.

The study conducted with support from the United Nations Educational, Scientific and Cultural Organisation (UNESCO) Institute for Statistics and the Lahore University of Management Sciences did not include the Federally Administered Tribal Areas (FATA), Gilgit-Baltistan and Pakistan administered Kashmir.

Pakistan spends 1.9 percent of its GDP on education, compared to a global standard of four percent. In contrast, 54 percent of the budget goes to defence and servicing of debt to buys weapons.

However, a part of even this low budget remains underutilised. The four provinces of Pakistan spent 31.3 billion rupees (293 million dollars) on education in 2012-2013 – less than half the allocated budget, according to Alif Ailaan, an alliance of NGOs working to bring education to the forefront of public discourse.

The group is campaigning for both an increased budget and for better utilisation. “We need both because the scale of the solution has to match the scale of the problem,” Mosharraf Zaidi from Alif Ailaan told IPS.

Zaidi said construction of school buildings and the hiring of teachers have become tools of political patronage. And yet education is not politicised enough because politicians are not “expressing any outrage at the outcome of this education system.”