MONTEVIDEO, Nov 6 2013 (IPS) - The small South American country of Uruguay could become a major logistics hub in the Southern Cone due to the deepwater port that the government is planning to build in a tourist area on the Atlantic ocean.

The project is controversial, because it would convert an undeveloped natural tourism zone in the department (province) of Rocha in the southeast of the country. And it would also compete with terminals in the country’s two giant neighbours: Brazil and Argentina.

There is already ongoing tension over trade issues between Uruguay and Argentina, and the ports of Buenos Aires and Montevideo have been rivals since Spanish colonial times.

The late October decision by Buenos Aires to ban Argentine exports from being trucked to Uruguayan ports for shipment overseas has added a new element of uncertainty to the Rocha port project.

For now, the port of Montevideo is mainly affected, as a regional transport hub that receives shipments from numerous maritime and river terminals in Argentina and transfers cargo to ocean-going vessels. If Argentina’s ban is kept in place, port operations in Montevideo could drop by 25 percent.

Montevideo, Uruguay’s main port, has an annual cargo volume of just over 11 million tons, similar to its rival, Buenos Aires - the capital of a country with a territory 16 times larger and a population 13 times larger.

According to government sources consulted by IPS, the terminal will be built in stages, and because of its geographic location and its natural depth of 20 metres, it is being offered as a lower-cost shipment point for minerals and grains from neighbouring countries.

Enrique Pintado, Uruguay’s minister of transport and public works, told IPS that the project should be a kind of “cooperative” effort among all countries in the region, to save on shipping costs so that products reach their destination, mainly China and Southeast Asia, “with less distorted prices.”

According to a document from the Inter-ministerial Commission on the Deepwater Port, the terminal could generate 50 percent savings in logistics costs for certain trade flows from the region to Asia, and could eventually handle 50 million tons a year of cargo.

The minister said the capacity of other ports in the region is “saturated”, like Santos in the southeast of Brazil, which is Latin America’s biggest container port, which means “the waiting time for loading and unloading merchandise is excessive.”

The key to the success of the new port is its natural depth, according to Pablo Genta, under-secretary of transport and a member of the Inter-ministerial Commission.

Today, ports on the Atlantic that are about 12 metres deep can handle 60,000 tons of cargo per vessel. The port in Rocha could more than double that capacity, by serving ships carrying up to 160,000 tons, Genta told IPS.

The port of Santos handles more than 100 million tons of cargo annually. 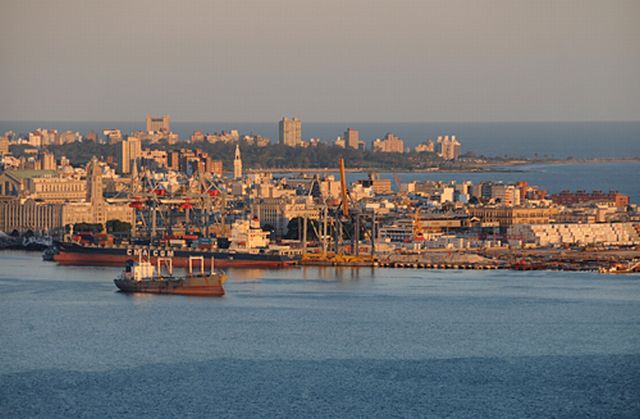 The port of Montevideo as seen from the Cerro neighbourhood. Credit: Daniel Stonek/CC BY 3.0

Uruguay wants to attract a significant portion of the grain and mineral cargo that Argentina, Bolivia, Brazil and Paraguay ship to China and Southeast Asia.

But the under-secretary stressed that Uruguay’s own future production justifies the plans for the port. He was referring to the Aratirí mining project in the centre of the country, where the Indian company Zamin Ferrous hopes to extract 18 million tons of iron ore a year which would be transported to the coast through a slurry pipeline.

Economic, topographical and marine hydrology studies are currently being carried out, as well as physical-chemical studies to establish an environmental baseline, with the aim of putting it out to tender in 2014.

A law passed in January approved construction of the port in the department of Rocha, in an area that contains the beach resort towns of Mar del Plata, El Palenque and San Francisco.

The port is to cover an area of 3,027 hectares, for which land will have to be expropriated. In July, the government called for expressions of interest from potential users of the terminal.

The coastline of Mar del Plata, El Palenque and San Francisco is sparsely inhabited. The white sands and waves and natural vegetation form part of a 46-km stretch of beach between La Paloma, Rocha’s main resort town, and Cabo Polonio, a remote beach village that is inaccessible by road, has no electricity or running water, and is home to a colony of southern sea lions and South America’s most important mobile sand dune area.

Opponents of the port, especially the Movement for a Sustainable Uruguay (MOVUS), argue that there is no clear evidence that neighbouring countries will be interested in using the port.

The only obvious freight use, they say, is by the planned Aratirí open-pit mine, which does not yet have all the permits it needs, and has run up against strong social and environmental opposition.

Legal action has been taken to challenge the approval of construction of the port.

Minister Pintado argued, however, that Uruguay cannot fail to take advantage of the fact that Asia “has been shifting its interest in investment and business westward and is breaking down the North-South economic logic.”

In the mid term, he said, the port would handle shipments of grains and bulk liquids, especially oil and its by-products.

The authorities estimate the cost at one billion dollars – an investment that will be made in stages, “like the layers of an onion,” Pintado said. Different terminals will be built as neighbouring countries and the private sector express interest.

Corporación Navíos SA, a shipping company that operates under the free-zone procedure in the port of Nueva Palmira at the confluence of the Uruguay and Paraná rivers, has closely followed the process and hopes to invest in the Rocha terminal, perhaps by means of a public-private contract.

The firm stores and transports freight that arrives in river barges from Argentina, Bolivia, Brazil, Paraguay and Uruguay.

Ruben Martínez, general manager of Corporación Navíos, told IPS that many of the company’s ocean-going ships set out with “incomplete” loads.

“There is merchandise, like iron ore, that requires larger vessels, which need a stop off at another port to complete their load,” he said. For that reason, he added, the activities in the ports of Nueva Palmira and Rocha could complement each other.