The legal framework for large-scale mining is being prepared in Uruguay, a country where mining has never played an important role in the economy but which could become the world’s eighth largest producer of iron ore. 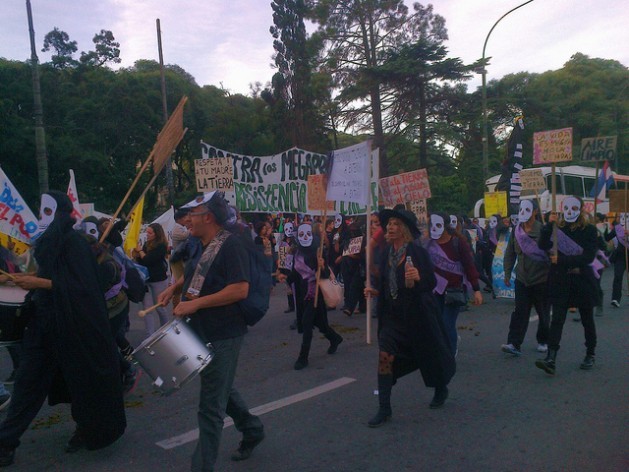 MONTEVIDEO, Aug 26 2013 (IPS) - A bill that would regulate large-scale mining operations is making its way through Uruguay’s two houses of parliament, despite a lack of political consensus and vocal opposition from environmental organisations and other sectors of civil society.

The proposed legislation, submitted by the executive branch and backed by the ruling Frente Amplio (FA) or Broad Front coalition, declares that large-scale mining would serve the “public interest”. But critics charge that the bill was drafted to serve the interests of the Aratirí project planned by the Indian mining group Zamin Ferrous, aimed at the production of 18 million tons of iron ore annually, with a promised investment of three billion dollars.

Opposition to these plans by environmentalists, farmers and other residents of the areas that would be affected by the mining operations is becoming increasingly louder. In the last demonstration against large-scale mining in Uruguay, held on May 10, more than 10,000 participants marched down 18 de Julio Avenue, the main thoroughfare in downtown Montevideo.

Meanwhile, in a survey conducted by the Radar consulting firm, which asked the question, “Are you in favour of open-pit mining activities in Uruguay, such as the Aratirí project?”, 46 percent of respondents said that they were opposed, 28 percent were in favour, 12 percent had no opinion on the matter, and 14 percent said they knew nothing about the subject.

The Aratirí project would occupy 4,300 hectares and encompass five open-pit mines on 500 hectares, associated logistics facilities, a processing and beneficiation plant, and a 212-km concentrate slurry pipeline to transport the ore to a deepwater export terminal that the company plans to build on the Atlantic coast, in an area where tourism plays a major role in the local economy.

But the entire undertaking, including the “buffer zones”, will take up 14,505 hectares in three departments in central and eastern Uruguay: Durazno, Florida and Treinta y Tres. The project also includes the installation of five new high-voltage power lines to supply power to the mining facilities and the port.

Opposition has also taken the form of proposals and local campaigns to declare the departments of Treinta y Tres and Lavalleja, in eastern Uruguay, and Rivera and Tacuarembó, in the northeast, as “mega mining-free” territories. In Tacuarembó, where there are requests for prospecting permits involving 300,000 hectares of land, activists say they have collected the number of signatures necessary to demand the calling of a referendum, under Uruguayan law.

“Tacuarembó has no tradition of mining. It is a region of very fertile land, with tremendous capacity for producing living things, and it lies over the Guaraní Aquifer. Its natural conditions are much better suited to producing biodiversity,” farmer Daniela Pírez of the Tacuarembó for Life and Water committee, which headed up the collection of signatures, told Tierramérica*.

The new bill, which would modify the current Mining Code, contains “provisions and exceptional benefits that are aimed at enabling the (Aratirí) project,” according to the Movement for a Sustainable Uruguay (Movus).

“This law has a first name and a last name: Aratirí. That’s where the whole thing started, regardless of whether there may be other mining projects,” Senator Sergio Abreu of the opposition National Party told Tierramérica.

Frente Amplio senator and former minister of industry Daniel Martínez denied the accusation. The proposed law “was conceived in the framework of large-scale mining in general, because there are many projects coming into Uruguay, and the idea was to have a special law that would demand greater environmental protection measures and ensure more resources for the state,” he told Tierramérica.

For the moment, however, the other mining projects in the country are one tenth the size of Aratirí, according to the Uruguayan Chamber of the Mining Industry.

The Aratirí project will represent the biggest foreign direct investment in the country’s history. According to the company, its implementation will generate gross value added of around 1.5% of GDP throughout the 20 years of its life cycle and 1.4 billion dollars in exports annually.

With regard to taxation, the bill expressly establishes that mining and related activities will not be eligible for the application of promotional tax regimes that grant corporate income tax (IRAE) exemptions.

But it does allow the application of exemptions for various other taxes, as established in the law on investments, which could add up to between 700 million and one billion dollars for the Aratirí project.

The bill also stipulates that prospecting, exploration and environmental assessment costs incurred prior to the concession, which are directly linked to the large-scale mining project covered by the respective contract, can be shown as losses in the first business year in which production begins or amortised on a fixed instalment basis over a five-year period.

Martínez believes that the new bill establishes “a very significant increase in the tax burden,” although “this project has exemptions which may or may not be debatable. Any investment in the country has exemptions for the value-added tax on imports and the IRAE.”

Another controversial aspect is the plan for the closure of the mines. As far as Movus is concerned, no precise limits have been set. Moreover, “Aratirí told the Senate committee that its plan is for these enormous craters to be filled with rainwater over a period of 80 years.”

“Uruguay Natural” or Natural Uruguay, the “brand” used to promote the country abroad as a tourism destination, does not seem compatible with large-scale mining activity.

Martínez, however, stressed that “there are people who confuse Natural Uruguay with an agrarian country, a country of poverty and exploitation, and there is nothing that contaminates more than poverty. Either we diversify productive activities and pursue advances in sectors with higher technology and value added, or we will be a poor country forever.”

Journalist Víctor Bacchetta, of Movus, does not believe that this small South American country has the potential to be a “mega mining” nation.

“Uruguay is poor in mineral resources. It does not have the huge reserves of countries like Chile or Peru. Aratirí is proposing 12 years of extraction activities, according to what can be gathered from its Environmental and Social Impact Assessment, and after that it will all be over,” Bacchetta told Tierramérica.

“This makes the project even more absurd for Uruguay, because it is a country with a privileged ecosystem in terms of its fertile land and water resources, which are not found in the (Andes) mountains, where nothing else can be done,” he added.

The government has still not approved the environmental impact assessment for the project. The company has also said that it will wait for the final outcome of the legal text before signing a contract with the government to initiate operations.