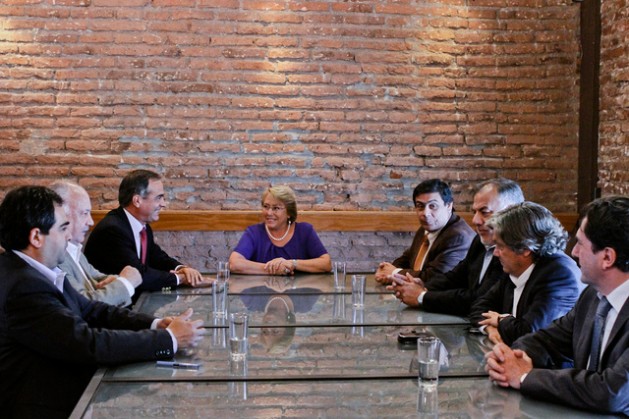 Michelle Bachelet in a meeting with the representatives of the Nueva Mayoría coalition the day after her victory. Credit: Michellebachelet.cl

SANTIAGO, Dec 16 2013 (IPS) - The promised structural reforms to modify the political system inherited from Chile’s 1973-1990 dictatorship and reduce the severe social inequalities in the country propelled Michelle Bachelet to a resounding triumph in the Sunday Dec. 15 runoff election.

But the 62-year-old pediatrician and public health expert, who governed the country from 2006 to 2010, will not only have to respond to the demands that the people have been voicing in nationwide demonstrations over the past few years, but will have to overcome enormous differences in her centre-left coalition.

The Nueva Mayoría (New Majority), the new coalition that Bachelet represented in the elections, added the Communist Party (PC) and other smaller groups to the centre-left Concertación or coalition for democracy that governed Chile between 1990 and 2010.

The main parties in the Concertación, which started to govern after the 17-year dictatorship of the late Gen. Augusto Pinochet came to an end, were the Christian Democracy Party and the president-elect’s Socialist Party.

Highly ideological campaign promises, such as the decriminalisation of therapeutic abortion – Chile is one of the few countries in the world where abortion is illegal under all circumstances – will force her to negotiate heavily among her allies.

Bachelet won a landslide victory over right-wing candidate Evelyn Matthei,with 62.15 percent of the vote against her rival’s 37.84 percent.

The socialist leader, the first president reelected by popular vote in Chile since 1932, also won the highest proportion of votes since the restoration of democracy.

In her campaign Bachelet promised to reform the constitution put into effect by Pinochet in 1981 – a longstanding demand of many Chileans. She also promised tuition-free quality higher education for all, like in the rest of South America, and tax reforms based on raising corporate taxes.

Bachelet will have to meet the expectations for change expressed by massive student protests since 2011, which put the government of right-wing President Sebastián Piñera up against the wall, before the demonstrations extended to other sectors of society.

In this country of 17 million people known as Latin America’s tiger, two out of three households have incomes of less than 1,200 dollars a month and are deep in debt. And half of all workers earn less than 500 dollars a month, whereas the basket of essential items costs 250 dollars according to unofficial estimates.

By contrast, the 4,500 richest families have monthly incomes of over 40,000 dollars.

Chileans have become increasingly fed up with the abyss between rich and poor, a sentiment that led to Bachelet’s massive win, according to analysts.

But turnout was low. In the first round on Nov. 17, it stood at 50 percent, and went down to 41 percent in the second round. (Chile dropped compulsory voting in late 2012.)

The president elect, who will begin her second term on Mar. 11, 2014, will have an absolute majority in both houses of Congress, because in the November elections her coalition won 21 of the 38 seats in the Senate and 67 of the 120 seats in the lower house.

But contradictory positions in her coalition indicate that some reforms face an uphill battle. To that is added the fact that constitutional amendments require a 67 percent majority.

Analyst Guillermo Holzmann told IPS that “Bachelet will have to define what relationship she will have with the political parties and how much room she is going to give each one, and that will be reflected in the makeup of her cabinet.”

With respect to the differences, Holzmann said Bachelet will be able to play the role of mediator within the Nueva Mayoría or “exercise a kind of leadership that would force the parties to submit themselves to what she decides, leaving the responsibility of mediation in the hands of the parties” in her coalition.

This will form part of her government strategy, he added, which is why it is so important to see who she names to her first cabinet.

According to Holzmann, “if the president chooses independent people and sets up a cross-cutting government, her message will seek to connect with the many people who didn’t vote.”

In that scenario, “inside the Nueva Mayoría we would see a greater willingness to generate a consensus or cohesion, where the most likely thing is that the PC won’t want to be part of the problem but of the solution instead.”

He predicted that “the PC will tend to win lower-profile posts in the government, which will not be so visible even if they have a strong influence.”

Analyst Domingo Namuncura, with the Barómetro de Equidad, said the leftist and centre-left parties of the Nueva Mayoría “have come together around a common programme.” That means, he told IPS, that “there has been a first signal of adhesion to the principles on the programme.”

He added that the differences over how to move forward on the points of the agreed programmewould be resolved by means of internal debate within the coalition.

Namuncura said one of the key differences could arise when it comes to deciding how to push the constitutional reforms forward, given that wide sectors of the PC want a constituent assembly to rewrite the constitution – an option to which the Christian Democrats are opposed.

Above and beyond the differences within the future governing coalition, Bachelet will have to deal with the pressure from the social movements, which will be pressing for quick responses to their demands.

On Monday Dec. 16, the Confederation of Chilean Students (CONFECH) warned that it would not support in any educational reforms during the next administration if they were not drawn up with the participation of the social movements.

While Bachelet’s supporters were still celebrating, CONFECH announced new demonstrations, with the aim of maintaining the pressure. It also said it would hold former leaders of the student movement, like Camila Vallejo who was elected to the lower house of Congress for the PC, accountable.

“The new government will have to seek mechanisms to reflect and address that broad range of demands that are not being channeled by the system, to provide responses within a reasonable timeframe, because society does not appear to be willing to wait,” said Holzmann.