Chile’s Bachelet Will Try to Win Over Social Movement

SANTIAGO, Mar 28 2013 (IPS) - Michelle Bachelet, who hopes to win a second presidential term in Chile, will have to win over the growing social movement that has been heavily critical of the current right-wing administration and disillusioned with 20 years of government by the centre-left coalition.

Bachelet returned this week to a country that is markedly different than the one she left after the end of her four-year term, in March 2010. In the last two years, student organisations, trade unions and other civil society groups have held the largest protests since the resistance to the 1973-1990 military dictatorship of the late General Augusto Pinochet. 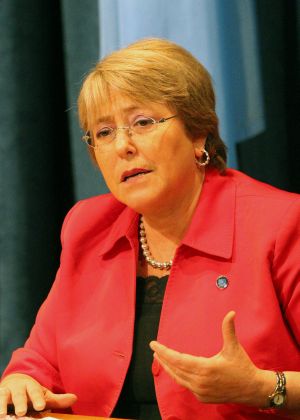 “She is now finding a large and significant part of society that wants change, and not merely improvements of the current model,” anthropologist Mauricio Rojas, a professor at the Alberto Hurtado University, told IPS.

“It is a group that was culturally, socially and politically invisible for 30 years, but has now woken up,” he said.

After the 1988 plebiscite that paved the way for the return to democracy, “there was strong criticism of the (economic, financial and political) model, which waned after democracy was restored.”

But the arrival of the right to power, with President Sebastián Piñera, “released a force that was repressed or self-contained, and that wants change.”

On Wednesday, Mar. 27 Bachelet officially announced that she intended to run for president again, in the Nov. 17 elections. The announcement came just 12 hours after she landed in Santiago, returning from New York, where she spent the last three years as the head of the U.N. women’s agency.

In her first public statements, the former president said the fight against inequality would be the central focus of her campaign; acknowledged, in frank terms, the errors committed by the successive administrations of the centre-left Concertación or coalition of Parties for Democracy (1990-2010); and called for “in-depth reforms” of the current political and economic model.

“Chile has changed,” she said. “It is a much more active country, more conscious of its rights, whose people are tired of the abuse of power and are fed up with their needs not being taken into account.”

“The citizens today are more mature and empowered,” added Bachelet, who was one of Chile’s most popular presidents.

Iván Fuentes, the leader of the small-scale fishers of the remote southern region of Aysén, agreed that Chilean society today is “less conformist and wants far-reaching changes.”

Fuentes is also the head of the Aysén social movement that began to hold protests in early 2012 over a range of issues. The unrest in his region, which forms part of the wilderness area of Patagonia, is basically the result of people there feeling ignored by the central government.

“It is a non-conformist but constructive society, which means this is a good opportunity to work together as a country, because people want to set forth ideas, to be listened to; they don’t want policies in which others decide for them,” Fuentes said.

In an interview with IPS, the head of the Aysén social movement said that despite the challenges, “politics today has the opportunity to get on the good side of Chilean society.”

In her first speech on the campaign trail, Bachelet mentioned social inequality, the student protest movement demanding free quality public education, the demonstrations in the regions, sexual and reproductive rights, and the inclusion of the country’s indigenous minority, among other issues. She also promised to listen to society’s demands.

A source close to the former president told IPS that a team of experts was already drawing up a proposal for tuition-free education for segments of the population who have not been eligible for school vouchers or other state subsidies.

The idea, the source said, is to implement measures that would gradually move the country towards public education completely free of cost, like in neighbouring Argentina.

Political scientist Guillermo Holzmann said one of the biggest challenges for Bachelet, a 62-year-old pediatrician-turned-politician, will be winning over segments of society that do not see her as someone who represents them. “Solving that problem should be a priority,” he told IPS.

Holzmann pointed out that the change in Chile’s legislation that made voting non-compulsory affected all political forces as a result of low turnout in the October 2012 municipal elections, when it went into force. (Only 42 percent of the 13.4 million people of voting age – of a total population of 16.5 million – came out for the elections.)

In polls, Bachelet has ratings of more than 50 percent – the proportion needed to avoid a runoff.

She has had time to prepare her return. And the political leaders of the centre-left coalition, whose reputations have taken a beating, not only did not accompany her physically in her first public appearance, but were not even mentioned in her speech.

In the latest survey by the Centro de Estudios Públicos (CEP), 57 percent of respondents said they did not feel represented by any political party or coalition.

Holzmann said: “What Bachelet says or does will be key for the unity of the Concertación,” which is made up of the For Democracy, Christian Democrat, Socialist and Social Democrat Radical parties, and is experiencing a severe internal crisis.

Bachelet said she would run in the primary elections for the candidate of a new opposition coalition that represents a much broader social and political majority than the Concertación. The new coalition is to include the Communist Party.

In the primaries, the former president will run against lawmaker Claudio Orrego, the Christian Democrat candidate; independent candidate Andrés Velasco, who served as her finance minister; and Senator José Antonio Gómez of the Social Democrat Radical party.

If she overcomes that first hurdle, Bachelet will face off with the candidate of President Piñera’s rightwing Coalition for Change. Competing for the candidacy are former defence minister Andrés Allamand of the National Renewal party and former public works minister Laurence Golborne of the Independent Democratic Union.

The candidate of the small Progressive Party, former socialist Marco Enríquez-Ominami, who took 20 percent of the vote in 2009, also formally announced that he would run for president.

Holzmann said Bachelet would have to live up to the high expectations surrounding her return, “especially among the factions in the Concertación who see her as a real alternative capable of winning the presidential elections.”

The former president’s popularity has remained high despite her nearly three-year stint abroad. She finished her four-year presidential term with 80 percent popularity ratings. And 53 percent of respondents, according to the CEP, believe she will be the next president.

In her speech, delivered in the southern Santiago district of El Bosque, Bachelet was given an enthusiastic welcome. “I love her, I love her, and she loves me too, I’m happy!” shouted one local woman who managed to exchange a few words with the former president and give her a kiss.

But that makes the challenge even greater, because if an eventual Bachelet administration fails to bring about the changes that society is demanding, the Concertación will be unable to contain the growing social movement, Rojas said.

“The social movement is now totally autonomous from the political structures, and if in-depth changes are not forthcoming, it will continue pressuring for them to happen,” he said.