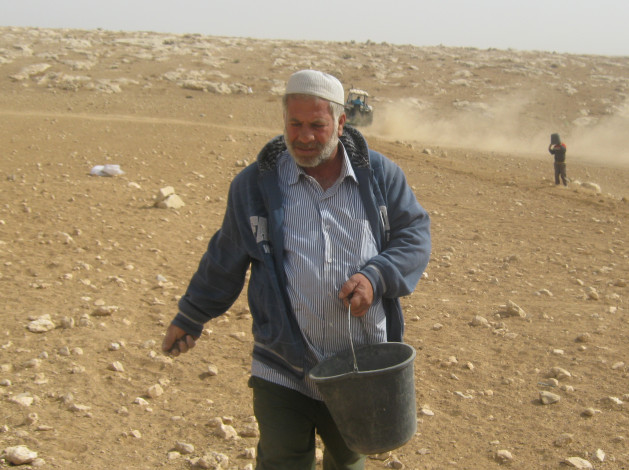 JINBA, Occupied West Bank, Dec 26 2013 (IPS) - Jinba is in the crosshair of ‘Firing Zone 918’ – and ‘Firing Zone 918’ is a microcosm of the Israeli occupation. Together with seven other communities, Jinba is slated for demolition to make way for an Israeli training ground. Forced eviction hangs over a thousand Palestinians.

Mahmoud Raba’i is sowing wheat in his field. Winter is here, but it hasn’t rained a single drop in the rugged, unforgiving, South Hebron Hills. “God willing, rain will come and fill the wells,” the Palestinian farmer murmurs.

Jinba is home to 300 Palestinian tent- and cave-dwellers who struggle for the right to carry on living on their land like their forefathers.

“We and our children live here; our sheep graze here. They want us to carry our land on our back and leave.”

It’s a furrow these subsistence wheat farmers and sheepherders have been ploughing generation after generation for over 150 years – steadily, relentlessly.

“This is our land,” Raba’i seethes. “We and our children live here; our sheep graze here. They want us to carry our land on our back and leave.”

Jabarin enters his cave. Mattresses are piled up against dark walls near tools. Toothbrushes, a comb, are strewn on a makeshift shelf. A stove lights his weathered face. “My grandfather, my father, and I were born here.”

The villagers in Jinba are among the West Bank’s poorest Palestinians. Living off the land isn’t easy when the land is under occupation.

In all 60.2 percent of the West Bank is designated ‘Area C’ – that is, under full Israeli military and administrative control. The largest community in the South Hebron Hills, the village of Jinba, is in ‘Area C‘.

The village has no access road, no running water and no electricity, no building permits, only demolition orders.

“We were handed demolition orders against the concrete poured on the floors of our tents and clinic. For everything we do, there’s a demolition order,” Jabarin tells IPS.

Jinba abuts Israel. Here, the infamous ‘Green Line’ which marked the border between Israel and the West Bank prior to the 1967 War is a white furrow crisscrossing the desert.

“Let’s get rid of the occupation,” reads the Arabic and Hebrew graffiti sprayed on the opposite side of a marker.

“Why a firing zone here? There’s enough open space inside Israel. They want to expel us and move us into heavily populated Palestinian areas. This firing zone’s just an excuse for Israel to pursue its land grab,” asserts Jabarin.

In contrast, ten illegal settlement outposts located within the firing zone are under no such threat.

Head of Jinba and guardian of his community, Jabarin incessantly patrols the village by foot to protect it from Palestinian smugglers and workers who cross into Israel illegally and, above all, from incursions by the Israeli military stationed in the area.

He documents the routine raids for the Israeli human rights organisation B’Tselem, and is one of the petitioners to the Supreme Court in Israel in a 14-year legal battle against the firing zone.

In September, the court interceded in favour of mediation between the Israeli authorities and the Palestinians. But the pressure hasn’t stopped.

Jabarin’s daughter Nawal, 12, is scared. Only a fortnight ago, Jabarin was arrested on suspicion of arson at a military base. “I wouldn’t have been released after eight days if I wasn’t innocent,” Jabarin scoffs.

The legal battle against forced eviction from ‘Firing Zone 918’ is part of a three-decade war of attrition waged by the Israeli authorities and local settlers against 4,000 impoverished Palestinian dwellers in the South Hebron Hills.

Land expropriation, harassment and acts of vandalism perpetrated by settlers against them are common practice, and the lack of law enforcement is glaring.

Earlier this month, a military squad was seen inspecting 25 uprooted olive trees in ATuwani area. In a separate incident, two days earlier, in Umm elAra’is, Israeli troops cracked down on Palestinians who complained of a settler trespassing on their land.

A week earlier on the same spot, soldiers stood idly by while settlers attacked Palestinians.

The Palestinian Authority is powerless in the face of these acts as it doesn’t control the area.

In solidarity with the peasants, peace activists have entered the fray.

Founded in 2009 by two Israeli physicists-activists, ‘Comet’ is a joint Israeli-Palestinian initiative. Its purpose – to provide basic solar and wind energy access to the off-grid, marginalised Palestinian communities of the area.

“Our NGO is political in essence,” Comet’s co-founder Elad Orian tells IPS. “We support their struggle to stay on their land.”

‘Comet’ builds and installs hybrid wind and solar mini-grids. These stand-alone systems provide about two kilowatt-hours per family per day to 2,000 Palestinians.

“It helps us economically. Women prepare more butter effortlessly with the electric butter churn. And we have a refrigerator, a washing machine, a TV.”

Sixteen of the 24 installations operated by Comet are under threat of demolition.

“You need a building permit. It makes sense. The problem is you have a bureaucratic mechanism whose purpose is to prevent people from obtaining permits,” says Orian. “And the people subjected to this bureaucracy aren’t Israeli citizens.”

Fortunately, Comet enjoys German government support, both financial and political, and can afford to fight legal battles on behalf of the Palestinian communities.

Abu ElAbed recalls that the army came to Gawawis two years ago with a demolition order, “but we haven’t heard from them since.”