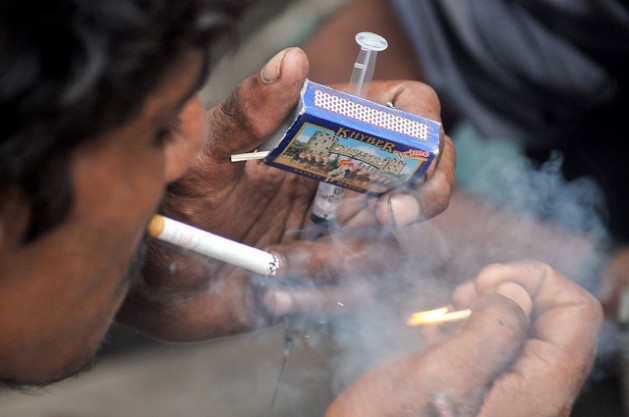 Intravenous drug users are the last in line to get support from Pakistan's government-run AIDS programme. Credit: Fahim Siddiqi/IPS

"How can I tell a farmer with half a hectare growing marijuana he will go to jail if in the [U.S.] states of Washington and Colorado it's legal?" -- Colombian President Juan Manuel Santos

Santos echoed a common theme, complaining of half-baked policies and lip service paid to drug reforms. Colombia, for many years Washington’s staunchest ally in the so-called war on drugs, has recently made an about-face, joining much of Latin America in questioning the increasingly violent consequences of prohibition.

Perry served as a foil for the other three panelists, though he agreed that U.S. states had the right to decide on policies independently from the federal government.

“I am not for legalisation of drugs,” Perry said. “We certainly would never jump out in front of a parade because that’s where the public seems to be going.”

“I’ve long wondered what it would take to persuade the Davos organisers to put drug policy on the main stage of the forum,” said Ethan Nadelmann, executive director of the Drug Policy Alliance, in a statement. “Drug policy reform as a global political movement has come of age.”

The response from the U.N.’s quasi-judicial International Narcotics Control Board was tepid and left the door ajar for more countries to challenge a faltering consensus on interdiction.

“I don’t see any evidence of any political will at the U.N. to penalise states that are exploring these options,” said Sean Dunagan, a former U.S. Drug Enforcement Administration (DEA) agent in Guatemala and current member of Law Enforcement Against Prohibition.

The U.S., which largely wrote the U.N. conventions that codified the war on drugs, has emerged Janus-faced on the world stage, with a president who admittedly inhaled, recent legalisation in two U.S. states – Colorado and Washington – and a populace increasingly unbothered by drug use among their friends and neighbours.

“How can I tell a farmer with half a hectare growing marijuana he will go to jail if in the states of Washington and Colorado it’s legal?” said Santos.

Despite increasingly viral coverage of the few that flout interdiction – next week’s Superbowl pits teams from Washington and Colorado and has been dubbed the “Marijuana Bowl” – nearly all countries still schedule and criminalise drugs based on guidelines codified in the 1961 Single Convention on Narcotics and the 1971 Convention on Psychotropic Substances.

“I see the conventions as lagging indicators. I don’t think they will be changed any time soon,” Dunagan told IPS.

In the developing world, Nadelmann says countries tend to pull their punches and can at times feel obliged to follow the path of retrograde policies, even as the countries which authored them distance themselves from those laws.

“Policy innovation in this area doesn’t come easily or naturally in Africa,” Nadelmann told IPS. “I think the old moralistic notions have yet to really be challenged.”

But Nadelmann says Annan’s evolution on the issue is vital for the region and carries significant symbolic weight. In 1998, Annan oversaw a special session of the General Assembly that focused exclusively on eradication, much to the chagrin of activists. But by 2011, Annan had joined other members of the Global Commission on Drug Policy in encouraging “experimentation with models of legal regulation of drugs.”

“What’s most significant in many ways is the fact that Kofi Annan was willing to identify so publicly and boldly with the cause of drug policy reform. He’s been on the global commission since its inception, but it’s only in the last year that he’s begun to step out of it more,” said Nadelmann. “In recent months he’s decided to make a deeper commitment on the issue.”

In May, the Organisation of American States released a report that raised the prospect – long advocated by harm reduction activists – of decriminalisation, elevating the easing of interdiction policies that since the 1970s were accepted as gospel by countries when confronting drug use.

Though Colombia had successfully reined in its once seemingly-untouchable cartels, Santos said increased production elsewhere, particularly in Central America, was an example of the “balloon” effect, where eradication only displaces, rather than eliminates production and does nothing to reduce demand.

Perry’s Socratic responses seemed to at times befuddle other panelists, particularly when he attempted to draw links to the fight against Al Qaeda. “How long have we been in the War on Terror?” asked the governor to the bemusement of the crowd.

Dunagan said it was important that reform not forget those already incarcerated. In the U.S., half a million prisoners are currently serving terms for drug offences.

“There are declines in prosecutions in Colorado and Washington but people aren’t being led out of jail in those states,” said Dunagan.

“There’s certainly a willingness for world leaders to challenge that orthodoxy that is U.S.-driven, and is enforced by the U.S. via the U.N. The trend is clear but I don’t know if we are at a critical mass.”