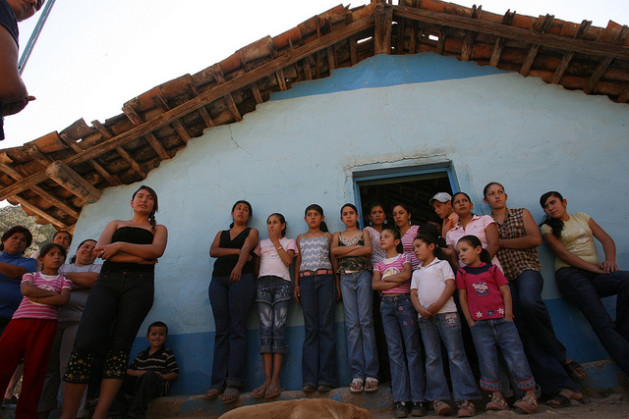 Women and children from the village where the Esparza family was murdered by soldiers in Mexico's "drug war" demand justice outside the schoolhouse.Mónica González /IPS

WASHINGTON, May 25 2013 (IPS) - Following the release of a major draft report on drug policy in the Americas, the secretary-general of the Organisation of American States (OAS), Jose Miguel Insulza, called for the beginning of debate aimed at reforming those policies throughout the region.

“Delivering this report today,” Insulza said Wednesday, “we are encouraged by the sincere aspiration, which I now have the privilege of presenting to the entire hemisphere, that this is not a conclusion but only the beginning of a long-awaited discussion.”

The draft report was shared with the 35 member countries of the OAS and is now scheduled to be discussed in depth at the upcoming organisation’s general assembly, on Jun. 4 in Guatemala.

The call for a new debate comes in light of a strengthened resolve on the issue throughout the region. This relates to the violence associated with drug trafficking as seen along the U.S.- Mexico border, as well as an increased prevalence of drug use and growing demand for health care services to treat addictions.

While acknowledging shortcomings in the implementation of current policies, some countries are continuing to defend the overall approach, and are encouraging a plan of action adopted by the Inter-American Drug Abuse Control Commission (CICAD) branch of the Washington-based OAS. This approach calls for the continued concentration of efforts to reduce both supply and demand, as well as measures in line with United Nations conventions on drug law.

The new OAS discussion will inevitably be energised by the recent surprise legalisation of marijuana in two U.S. states in November.

“The report points to the need for flexibility to pursue options that may imply national and international reforms, including legal and regulated cannabis markets. And it emphasises that this more open debate is really just now beginning.”

Many of the region’s leaders have expressed frustration with the limits and exorbitant costs of current policies and their desire for a fuller and more creative debate.

But according to Walsh, who participated in writing the OAS report, there is a lot of scepticism over whether the OAS will be up to the task, especially given U.S. domination of the issue. But he also emphasises that the new report represents a good first step in the direction of a more constructive and nuanced debate.

“Drug policy is an international issue as well as a domestic issue and it can be hard to separate them, especially when you’re talking about drugs trafficking across borders – if it’s an issue in Colorado, chances are it is related to the issue in Mexico,” Walsh, who released a paper on this issue earlier this week, told IPS.

“In the case of cannabis in particular, the U.S. has been the chief advocate for international drug conventions that place strict controls on cannabis. However, as the U.S. begins to revisit and alter its cannabis laws, this will certainly have an effect on how the drug conventions are seen within the U.S. – and, and in turn, in Latin America, because all countries in the Americas are signatories of the same treaties.”

The OAS draft report even explores the potential creation of legal and regulated markets that would reflect these changes taking place in the United States.

“Changing U.S. public opinion towards cannabis is being reflected in changes in state policy, which has already placed the U.S. at odds with the drug conventions,” Walsh notes. “And while some of the Latin American states might be feeling a bit puzzled by the U.S.’s new approach to drug policy, others are seeing an opportunity to have similar proposals.”

Yet significant differences remain in public attitudes on this issue outside the United States. Walsh suggests that while public opinion has led government policy in this county, governments would need to lead public opinion towards legalisation in many Latin American countries.

Following the November elections here, a looming disconnect has opened up between where the United States seems to be going on cannabis policy and how the U.S. is asking other countries in the region to act. This is most evident in the case of Mexico, with Washington continuing to push the Mexican government to use its security institutions to forcefully crack down on the illicit cross-border drug trade.

For the moment, it appears unlikely that this policy will change. Yet some analysts say they are already seeing a fundamental shift in this dynamic, with Latin American governments taking the lead for the first time, in trying to define drug policies in the region.

Depending on how it proceeds at the meeting on Jun. 4, the new OAS report could be a central component of this shift. Beyond the cannabis issue, for instance, the OAS report offers a range of proposals and alternatives to be considered which, if adopted, would dramatically change the way drug policies are implemented.

This is happening after years in which the U.S. government was able to largely dictate such policy. Very recently, however, Latin American countries have been examining the drugs problems they’re dealing with on an individual level – and to decide on the most appropriate policy responses.

“Most of the considerations of new cannabis policy involve examining the potential to separate the cannabis market from the wider black market for illicit drugs,” Colletta Youngers, a long-time Latin American drugs expert with WOLA, told IPS.

“This is both to protect the people who want to obtain cannabis from having to go into criminal markets, and also to the extent that cannabis is a big part of illicit drug revenues that are for now entirely in criminal hands and to put those revenues into the hands and control of the state.”

Still, she admits that for the time being the issue of legal, regulated cannabis markets is a priority for some U.S. states, but not yet for the national government. But Youngers also points to countries such as Uruguay – where such a law is currently pending – and others that are currently exploring such issues.