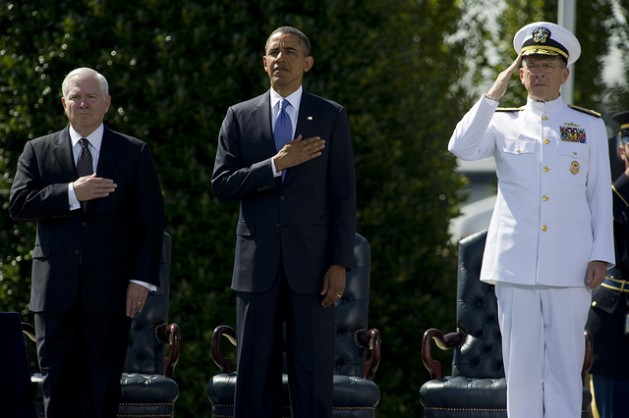 WASHINGTON, Jan 10 2014 (IPS) - Criticism in the memoirs of former secretary of defence Robert M. Gates of President Barack Obama’s lack of commitment to the Afghan War strategy of his administration has generated a Washington debate about whether Obama was sufficiently supportive of the war.

But the Gates account omits two crucial historical facts necessary to understanding the issue. The first is that Obama agreed to the escalation only under strong pressure from his top national security officials and with very explicit reservations. The second is that Gen. David Petraeus reneged on his previous commitment to support Obama’s 2009 decision that troop withdrawal would begin by mid-2011.

Danger signs appeared almost immediately that the pro-escalation coalition would seek to alter the policy in their favour.

Gates makes only the most glancing reference in the newly published “Duty: Memoirs of a Secretary of War” to the issue of the beginning of troop withdrawal from Afghanistan.

The former defence secretary refers to “suspicion and distrust of senior military officers” by both Obama and vice president Joe Biden. And he describes a Mar. 3, 2011 National Security Council meeting in the White House situation room which Obama opened by criticising the military for “popping off in the press” and vowing to push back against any military delay in beginning the withdrawal.

Gates quotes Obama as saying, “ If I believe I am being gamed . . .” and says he left the sentence “hanging there with the clear implication the consequences would be dire.”

Gates writes that he was “pretty upset,” because he thought “implicitly accusing Petraeus” of “gaming” him at a big meeting in the Situation Room was “inappropriate, not to mention highly disrespectful of Petraeus.”

“As I sat there,” Gates recalls, “I thought: the president doesn’t trust his commander, can’t stand [Afghanistan President Hamid] Karzai, doesn’t believe in his own strategy, and doesn’t consider the war to be his. For him, it’s all about getting out.”

But Obama’s distrust of Petraeus was clearly related to the sequence of events related to Obama’s policy decision on Afghanistan and Petraeus’s signaling his desire to undermine it – all of which Gates omits from his account.

Obama was extremely wary of the military’s request for 40,000 more troops for Afghanistan on basic geopolitical grounds from the start, as documented by notes of National Security Council meetings used for Bob Woodward’s accounts of those meetings in “Obama’s Wars” and in an earlier account by Newsweek’s Jonathan Alter.

Both Obama and Vice-President Joe Biden argued in the meetings in September and October 2009 that the primary U.S. concern should be Pakistan, not Afghanistan, whereas Petraeus and Adm. Mike Mullen were insistent that Afghanistan be the priority, according to Woodward’s account.

The military leaders argued that the Taliban would welcome Al-Qaeda back to Afghanistan unless it was defeated. But Biden, acting with Obama’s encouragement, repeatedly attacked the argument and got CIA official Peter Lavoy to admit that there was no evidence to support it. Obama challenged another key argument by the military, asking why a long-term U.S. military presence in Afghanistan would not harm Pakistan’s stability.

It was clear to the officials supporting ISAF Commander Stanley A. McChrystal’s request for 40,000 more troops that the White House was not going to agree unless something was done to tip the scales in the other direction.

In a White House meeting on Oct. 5, Petraeus argued again that the Taliban movement would invite Al-Qaeda back if it took over, and Mullen, Gates and Secretary of State Hillary Clinton all spoke up in support of that general theme, according to Woodward.

Six days later, McClatchy newspapers reported the White House had been “minimizing warnings from the intelligence community, the military and the State Department about the risks of adopting a limited strategy focused on al Qaida”. The story cited interviews with 15 “mid-level or senior military, intelligence and diplomatic officials” who said they agreed with what were described as “new intelligence assessments” that if the Taliban were to return to power, it would allow Al-Qaeda back into the country.

In fact the intelligence community had not prepared any national intelligence estimate on that issue. Obama’s principal national security officials were putting their own twist on intelligence reporting.

The leaking to the news media of a politically damaging version of internal debate between the White House and the coalition pushing for a major escalation was nothing less than shot across the bow from Obama’s principal national security officials, including Petraeus, Mullen, Gates and Clinton. They were signaling to the president that he would incur a significant political cost if he rejected the McChrystal request.

In November 2009, Obama compromised with his national security team. He agreed to 30,000 troops instead of the 40,000 that McChrystal had requested, but not for a national counter-insurgency campaign to defeat the Taliban as Petraeus had wanted. The military effort would be only to “degrade” the Taliban.

And crucially, an evaluation in July 2011 would determine not whether a withdrawal and transfer of responsibility could begin but what it’s “slope” would be, according to the meeting notes cited by Woodward. Obama even insisted that the military not occupy any area that could not be turned over to the Afghan government.

On Nov. 29, Obama met with Gates, Mullen, and Petraeus to get their formal agreement to the compromise plan. Mullen pledged that he would “fully support” the decision. Petraeus said he would do “everything possible” to get the troops on the ground “to enable…the transfer [to Afghans] to begin in July 2011.”

But danger signs appeared almost immediately that the pro-escalation coalition would seek to alter the policy in their favour. The day after Obama publicly announced in a speech at West Point Dec. 1, 2009 that U.S. troops would begin to withdraw in July 2011, Gates and Clinton suggested in Senate Armed Services Committee testimony that the president was not locked into beginning a withdrawal in mid-2011.

Obama responded by insisting that his press secretary tell CBS News that the July 2011 withdrawal was “etched in stone”. After hearing about that Obama comment, Petraeus told Sen. Lindsey Graham that was “a problem” and said, “You need to fix that,” according to Woodward. Petraeus added that he would let Gates and Clinton “deal with this one”.

After taking command of U.S. and NATO troops in Afghanistan in mid-2010, Petraeus was asked on Meet the Press on Aug. 15 whether he might tell Obama that the drawdown should be delayed beyond mid-2011. “Certainly, yes,” Petraeus responded, openly threatening to renege on his agreement with Obama.

In September 2010, John Nagl, a retired colonel who had been on Petraeus’s staff and now headed the Centre for New American Security, told IPS that Obama would be forced by Republican pressure to “put more time on the clock”. And in December, Petraeus revealed to Obama’s main White House adviser on the war, Gen. Douglas Lute, “All we have to do is begin to show progress, and that’ll be sufficient to add time to the clock and we’ll get what we need,” according to Woodward.

Whatever Petraeus did in the early weeks of 2011 to raise the ire of Obama in regard to the withdrawal issue, it was against the backdrop of repeated indications that Petraeus was hoping to use both his alliances with Gates and Clinton and pressures from the Republicans in Congress to push back the previously agreed date for beginning withdrawal and handoff of responsibility to the Afghan government.

Gates knew, therefore, that Obama was reacting to a history of having already been “gamed” not only by Petraeus himself but also by his bureaucratic allies maneuvering to remove the restrictions on the Afghan War that Obama had imposed. The self-serving Gates account conceals the dishonest tactics employed to get Obama’s agreement to the Afghan War escalation.