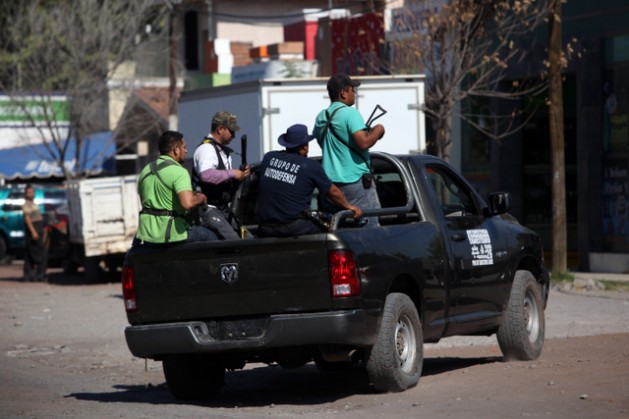 Members of self-defence groups are still patrolling the town of Nueva Italia in the region of Tierra Caliente in Michoacán, ignoring the Mexican government’s call for them to lay down their weapons. Credit: Félix Márquez/IPS

MEXICO CITY, Jan 16 2014 (IPS) - “The army decided to open fire on the people,” Estanislao Beltrán, a spokesman for the self-defence forces of Michoacán, said in a radio interview after the government’s attempt to disarm the vigilante groups in the state of Mexico, in which at least two people were killed.

The confirmed casualties were Rodrigo Benítez Pérez, 25, and Mario Pérez, 56, both day labourers from the town of Antúnez. They were not armed.

Some sources say four people were killed when the military attempted to disarm the self-defence group on Monday Jan. 13. But only these two deaths have been confirmed.

Michoacán is caught up in something like a civil war for which no solution is in sight. In February 2013, people from several towns in a region known as Tierra Caliente took up arms to defend themselves from the Knights Templar drug cartel.

Tierra Caliente is a farming region that has become the world’s largest avocado-producing area in the world. It also has mines, as well as the Pacific Ocean port of Lázaro Cárdenas, Mexico’s third-most important.

The Knights Templar are a breakaway faction of another cartel, La Familia, that emerged during the government of former president Felipe Calderón (2006-2012), initially claiming to “protect” the people of Michoacán from the notoriously brutal Zetas drug cartel.

But the new cartel soon forgot that aim, and began to kidnap and extort businesspersons, ranchers and farmers. They were so powerful that not even the executives and managers of transnational companies like Mexico’s potato chip maker Sabritas, a subsidiary of U.S. food giant PepsiCo, were safe from their attacks and extortion.

The situation hit a low point when they began to commit sexual abuse.

“They would show up at your house and say: ‘I really like your woman, I’ll bring her back soon’,” said Dr. José Manuel Mireles, the founder and leader of the self-defence group, in an interview with the independent agency SubVersiones.

Mireles is convalescing in Mexico City, after the small plane in which he was flying home to his town, after a meeting with federal authorities, crashed on Jan. 4. The cause of the crash has not been clarified.

In the last few months, with the green light from the federal authorities according to the self-defence force’s leaders, the group gradually gained control of the towns in Tierra Caliente. And little by little, they hemmed in Apatzingán, a city of 100,000 people that is the main stronghold of the Knights Templar.

The cartel, cornered, began to set fire to town halls and buses around the region. But instead of moving to dismantle the cartel, the government of Enrique Peña Nieto sent in the army to disarm the self-defence groups, which it had allowed to grow for months.

The government’s argument is that they are illegal groups, because in Mexico civilians are not allowed to carry guns of a larger calibre than nine mm.

The government has leaked information about a possible link between the self-defence groups and the Jalisco New Generation cartel, which splintered from the Sinaloa cartel headed by Joaquín “El Chapo” Guzmán.

According to the federal government, the Jalisco New Generation cartel has been trying to take control of the production and trafficking routes for synthetic drugs in Michoacán.

The leaders of the self-defence forces deny any ties to criminal groups, and feel betrayed by the federal government, which used to back them.

“The government has changed its tune,” Alejandra Guillén, a reporter who has closely followed the phenomenon of the self-defence groups in indigenous areas of Michoacán, told IPS. “It used to clearly support them, and would accompany them. But something happened; now it is sending in the military to disarm them and kill civilians.”

Experts in security like Martín Barrón, a researcher at the National Institute of Penal Sciences, say that what is happening in the state is the result of a misguided strategy applied by the Calderón administration: “governing through fear.”

Interior minister Miguel Osorio acknowledged that the current situation in Michoacán is a consequence of a decade in which violence incubated.

Michoacán, in the southwest, is one of Mexico’s most lawless states, and decades ago the population learned to live with – and in many cases, live off – the drug trade.

“None of the categories of analysis help us understand Michoacán,” said Guillén. “There are no good or bad guys, just a society very closely linked to the phenomenon of the drug trade, which it didn’t see as a bad thing until the turf wars began. We can’t forget that the region has been a drug production area for many years.

“And another important thing is that it’s not just a question of taking up arms. They have a social base,” she added.

One of the founders of the Knights Templar, Servando Gómez, was a teacher in a primary school in the Michoacán town of Arteaga, where until 2009 he received his paycheck as a schoolteacher.

And until early 2013, when he swapped his stethoscope for an assault rifle, Mireles attended patients in the small public hospital in Tepalcatepec.

In mid-2009, the druglord Gómez, known as La Tuta, phoned a radio programme to call for a pact with then President Felipe Calderón, saying his organisation would be prepared to disappear if the authorities guaranteed security in his territory and defended them from rival cartels.

“We are a necessary evil,” he said. “Please understand that the day I die they will put someone else in my place, and someone else will replace him, and so on; this will never end.”

Calderón rejected the proposal, and in response sent the security forces into the state, with poor results, and with dozens of police and soldiers ambushed and killed.

The tension in Michoacán has spread to neighbouring states like Colima, Querétaro and Guerrero, which have their own self-defence forces. There are a total of 36 of these vigilante groups, in eight of Mexico’s 31 states.

In the past few days, people in the Tierra Caliente region have seen public services restricted, supplies reduced, roads cut off, city government buildings set on fire, and civilians killed by the army.

The federal government launched a special operation in Michoacán and said it would not allow the self-defence forces to continue to act.

The self-defence groups, meanwhile, say they won’t hand over their weapons unless the leaders of the Knights Templar are arrested or eliminated. They say that if they lay down their arms, the drug traffickers will kill them.

“We are not going to put down our weapons or sit down to negotiate, until the criminal leaders are detained,” Beltrán told listeners of the Radio Nacional station.