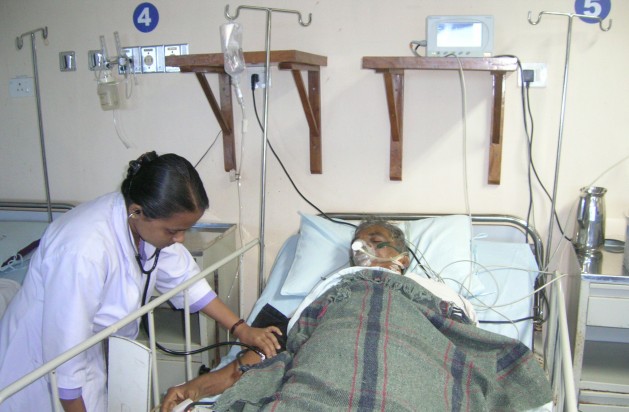 A patient being treated at the Regional Cancer Centre in Thiruvananthapuram in India. Traditional Ayurvedic treatment is being used increasingly to back regular cancer care. Credit: K.S. Harikrishnan/IPS.

THIRUVANANTHAPURAM, India , Feb 24 2014 (IPS) - Balakrishnan, a labourer from Kochi in the southern Indian state of Kerala, was suffering from oral cancer. He was admitted to the Regional Cancer Centre (RCC) in Thiruvananthapuram. After the first course of radiation therapy, the 60-year-old could not eat or drink because of severe pain and infection in the mouth.

An Ayurvedic mouth wash developed from the Neem plant was administered to Balakrishnan for three weeks during the second course of radiation. Ayurveda is a  herb and plant-based traditional Indian system of medicine. The result was excellent. He could consume soft drinks and eat without any difficulty.

“It was found that the side effects were much less in patients who took the Ayurveda drug compared to others who did not use the medicine."

“I did not use any antibiotics for the pain and inflammation that occurred after the radiation. The Ayurvedic mouthwash was enough to contain the side effects,” he said.

Balakrishnan was not the only one. Apart from him, 148 patients diagnosed with oral cancer were administered the Neem-based medicine at the RCC for treating inflammation.

“It was found that the side effects were much less in patients who took the Ayurveda drug compared to others who did not use the medicine,” Dr. Divya Raveendran, who was the lead researcher involved in the integration of modern and traditional medicines, told IPS before her sudden death.

Senior oncologist at the RCC Dr. K. Ramadas said many herbal components have been found to be more effective in their natural forms than as isolated molecules in managing the side effects of chemotherapy and radiation.

“Ayurveda may not have a big role in the main treatment modalities for cancer. But it has a complementary role. Many drugs in the Indian Systems of Medicine (ISM) have proven anti-inflammatory properties,” he told IPS.

A clinical trial at the RCC showed that use of an Ayurveda drug, Varanadi Ghritha, was good for preventing recurrence in treated head and neck cancer patients.

The RCC is one of the first major governmental health organisations in the country to have started the integration of modern medicine with ISM for curing cancer on the basis of scientific validation of traditional drugs.

Reports citing World Health Organisation statistics published in 2013 reveal that nearly 700,000 Indians die of cancer every year, while over a million are newly diagnosed with some form of the disease. “As against 477,000 men, 537,000 women were diagnosed with cancer in India in 2012,” a WHO report says.

Medical experts point out that despite differences between modern and traditional medicine in the approach to treatment, both systems have much to offer for cancer treatment. They say integration would enable the the public to obtain a wider range of treatment under one roof, leading to better healthcare delivery.

Dr. Stanly John, vice-president of the New Delhi-based Central Council for Indian Medicine of the Government of India, told IPS that the cost of cancer treatment with newer therapies was very high and was becoming out of reach for common people.

“If an integrated approach is adopted, it will help reduce the cost of treatment and improve the quality of life of all patients. Many institutions in the country are now integrating modern cancer treatment with traditional medicine for curing the killer disease,” he said.

In India, the practice of combining traditional and modern medicine started in the early 1980s. Navajyothisree Karunakara Guru, a practitioner of traditional medicine at the Santhigiri Ashram in Thiruvananthapuram district of the southern Indian state Kerala used it to contribute to treatment of several diseases, including cancer. Governmen initiatives to integrate ISM with mainstream healthcare began only in 2007.

According to the U.S.-based National Centre for Complementary and Alternative Medicine, a substantial amount of scientific evidence suggests that some complementary health approaches may help manage some symptoms of cancer and the side effects of treatment.

“Many drugs in Ayurveda have proven anti-inflammatory properties that should be explored for the common good of cancer patients,” said Dr. Rveendran. “Therefore, there is no need for modern medicine to turn its face away from ISM. Curcumin, the yellow pigment in turmeric which is known for anti-cancerous and anti-oxidant properties, is a good chemo-preventive agent.”

A research study conducted at Kerala Agricultural University in Thrissur by Shareesh Nalpadi in 2007 revealed that a traditional rice variety called Njavara has some anti-carcinogenic properties, especially in preventing breast cancer.

According to the American Cancer Society (ACS), laboratory and clinical studies suggest that some Ayurvedic herbal preparations may contain substances that have the potential to help in prevention and treatment of certain types of cancer.

“Although Ayurveda has been largely untested by Western researchers, there is a growing interest in integrating some parts of the system into modern medical practice. A few of the herbs and substances have been purified into drugs that are used along with other medicines to treat cancer.

“The National Cancer Institute funded a series of laboratory studies to evaluate two Ayurvedic herbal remedies, called MAK-4 and MAK-5. The studies so far have shown some promise against tumours in rats and cancer cells in lab dishes,” the ACS says on its website cancer.org.

Many herbs used in Ayurveda are anti-oxidant, and may prevent the onset of cancer. Early detection of the illness, the age of the patient and location of illness in the body are decisive factors in curing cancer, she said.

The Siddha system of medicine, considered one of the most ancient medicine systems in the world, offers some therapy for diseases like cancer, and for recurrence of tumours and leukaemia, Siddha doctors say.

“Allegations against the side effects of metallic contents in Siddha medicine are baseless. If one prepares the medicines scientifically as per the doctrines prescribed by ancient Siddha sages, no side effect will occur.”