EU No Instant Saviour for Ukraine 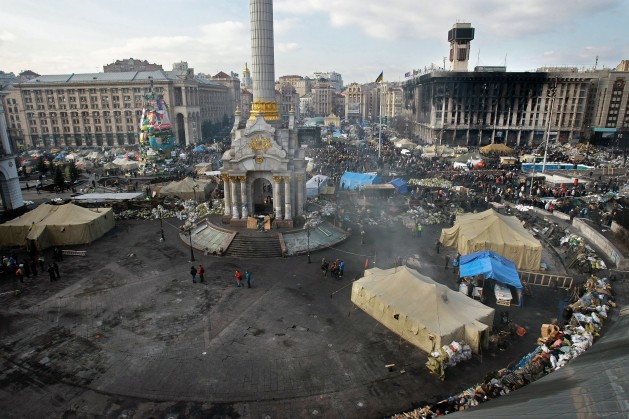 Independence Square in Kiev on Monday. In the aftermath of the revolution Ukraine now faces a difficult path to EU integration. Credit: Natalia Kravchuk/IPS.

KIEV, Feb 25 2014 (IPS) - Ukrainians are facing years of pain and upheaval if the country moves towards closer EU integration – or the prospect of the country being left to “rot” if they do not, experts say following the weekend’s revolution.

European leaders have pledged support for the East European state following the overthrow of Viktor Yanukovych’s regime while the interim government has suggested it will push for closer ties with Europe.

Although this will please many who took part in the protests over the last three months – as well as enrage many in the generally pro-Russian eastern and southern parts of the country – some analysts have warned there should be no illusions about what Ukraine will gain, and lose, if it starts on the long path to EU integration.

“The people who will gain from European integration expect some ‘pain’ as reforms are undertaken, such as unemployment and economic problems,” Lilia Shevstova, senior associate at the Moscow Carnegie Centre, told IPS.

While the months-long demonstrations which culminated in the ousting of Yanukovych had become a protest over the wider failings of the former president’s regime long before they reached their bloody end, European integration – or the lack of it – remained one of the key drivers of demonstrators’ discontent.

The initial mass gatherings on Kiev’s Independence Square following news that there would be no signing of an EU Association Agreement offering free trade underlined how important many Ukrainians felt closer ties to Europe were.

The EU says that this agreement is on the table once again.

Some analysts say that while it offers long-term economic benefits, these only come following reforms that would be largely costly and unpopular.

It is questionable whether a population which has already endured years of a faltering economy and its effects will be able to keep its enthusiasm for the EU over the many years it would take for the reforms to be fully carried out.

“These structural reforms will demand an enormous effort from Ukrainians,” Balasz Jarabik of the Central European Policy Institute in Slovakia told IPS. Slovakia joined the EU in 2004 after many difficult years spent transforming its economy and meeting EU criteria.

At the same time, closer European integration could have severe consequences for much of Ukraine’s heavy industry as relations with Russia become strained and trade links with its Eastern neighbour are lost. Russia is one of Ukraine’s most important economic partners and the export destination for goods from much of the country’s industrial-military complex.

“Those sectors of the Ukrainian economy which are Soviet in origin, including those linked to the military and to Russian industry, will suffer heavily, collapsing or being restructured,” Shevstova told IPS.

“Even the people who are left working at obsolete plans and factories will suffer. This will be the price of restructuring.”

Apart from what the EU could do, if anything, to compensate this long-term destruction of industry, it is unclear whether it can, even in combination with other international partners, come up with a sufficient package to help the Ukrainian economy meet its immediate financial needs, estimated at around 35 billion dollars this year.

Jarabik told IPS: “While it is not that big an amount as a proportion of EU GDP and the financial support should come from the International Monetary Fund (IMF) anyway, taking into account the political consequences [of such a move] as well as in the context of the Greek and Cypriot bailouts, I don’t think EU taxpayers have much appetite for bailing out Ukraine.”

However, for many pro-European Ukrainians it is not just enhanced trade benefits an Association Agreement offers that makes the EU important. Many feel it will finally turn Ukraine away from Russia and its ideological and social influences.

Critics of the Yanukovych administration accused it of being a Kremlin puppet regime, with corruption, cronyism, nepotism and a flagrant disregard for human rights mirroring the ways of Moscow.

As the protests went on, some demonstrators said they faced a straight choice between Ukraine under Yanukovych being essentially a Russian vassal state adopting repressive Kremlin ideology, or a modern country functioning under EU principles of a rule of law and with an open, free society.

But many Ukrainians say not everyone is fully aware what they will get out of closer ties with the EU and signing an Association Agreement which brings only limited economic benefits.

Vera Kovalenko, a sales assistant from Kiev, told IPS: “Of the people that protested, few had read the Association Agreement. Most thought that immediately after it was signed they would be able to travel to Europe without a visa and that there would be an end to corruption in Ukraine and life would be like it is in Europe. That wasn’t going to be the case.”

Much has also been made in Western media of a perceived anti-EU stance among the population of the East and South of the country which is home to about a sixth of Ukraine’s population that is ethnic Russian.

Widespread antipathy to the recent protests and often very public pro-Russian sentiment in the region has led to European integration being framed as a West and North Ukraine vs. East and South Ukraine struggle.

But this is not the case, say some.

Vladimir Pavlenko, 42, a salesman, from Kiev, told IPS: “The EU is a divisive issue, but less so for younger, educated people. They want closer ties with the EU almost regardless of what region they are from.

Meanwhile, others see a bright future for a Ukraine allied neither to Europe nor to Russia.

Katia Gerus, 39, a secretary from Donetsk in Eastern Ukraine, told IPS: “I don’t think Ukraine should join the EU. We just need to consolidate the situation in the country and then we can move on as an ordinary, independent country open to cooperation with all countries.

“We have our own resources and can find our own path ahead. We have an opportunity to do things properly on our own.”