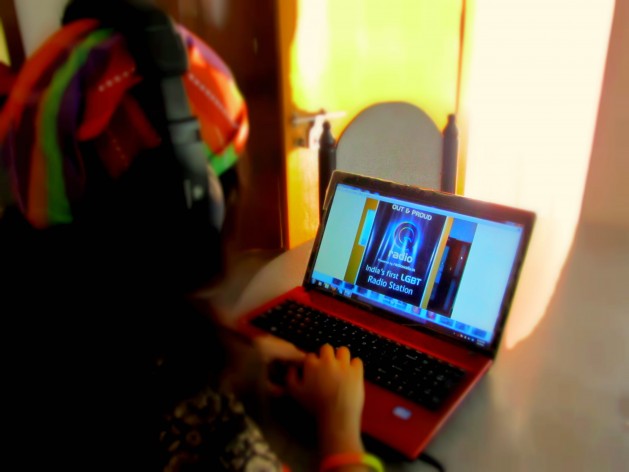 BANGALORE, Feb 11 2014 (IPS) - It is Wednesday afternoon in Bangalore, known as India’s tech city for being the hub of information technology companies. In her small four by four-foot studio, Vaishalli Chandra, channel manager of QRadio which is dedicated to the Gay, Lesbian, Bisexual and Transgender (LGBT) community, is in conversation with Ankit Bhuptani, a 21-year-old gay youth from Mumbai.

“I was 15 when I realised I was gay and it made me feel as though I had sinned against god. I began to condemn myself,” Ankit reveals. “But then I came to accept myself the way I am.”

Chandra, a straight person, smiles and calls out to her audience: “Yes, social acceptance is important and it begins with you accepting yourself. So let’s talk about that.”

“We need no validation from others…our community is enough to validate itself.” -- Shaleen Rakesh

Thanks to opportunities to network, unburden themselves and celebrate, radio is clearly emerging as the choicest media of the LGBT community in India.

Priyanka Divakar hosts a show for the queer community titled “Yari Ivaru (who is this person?)”, aired on Radio Active, a Bangalore-based community radio station that started in 2010 that broadcasts on an FM channel, rather than through the Internet. Divakar comes from the same LGBT community that her programme is for.

Born a man, Divakar underwent sex reassignment surgery to become a woman after suffering for years what most LGBT people face in India: lack of civil rights, social ostracism, stigma and mockery. Gay sex is a criminal offence in the country.

Both Chandra and Divakar firmly believe that their shows increase freedom of expression by giving LGBTs a platform to be themselves. Guests here talk about their identity struggle, the reaction of their families to their sexuality and the opposition of society.

“Most of the time, parents themselves disown children after coming to know of their sexual identity. This drives them straight into a world of economic, social and emotional insecurity and it results in their joining the sex industry, begging or other criminal activities,” Divakar says.

But not all stories are bitter and sad. Some also share a happy message.

Shaleen Rakesh of New Delhi recalls on radio the day he told his mother he was gay. “She said that she wanted to hug me; it made her very happy to see me coming out of the closet about my sexuality.”

Besides sharing stories of the past, the community also uses radio shows to discuss the future, especially plans to end discrimination against the community.

Radio, says transgender activist Kalki Subramanium of Chennai, clicks with the young working class, to which most of the LGBT people belong.

“The radio these days [is] a new avatar; you can see young people listening to the radio when they are travelling to work or when they are at work. It is easy to access and doesn’t cost a lot,” says Subramanium who is an award-winning social worker and founder of Sahadari, a non-profit organisation that promotes gender equality in India.

Abhijay, a graphic designer in New Delhi who fears that revealing his last name might cost him his job, agrees with Subramanium. Abhijay often tunes into QRadio which he finds “very good at encouraging a person struggling with his/her sexual identity to open up.”

However, nearly five months after its launch, he feels the radio risks being repetitive, and ought to take up more serious issues like police atrocities, discrimination of LGBT people at the workplace and also lack of decent work opportunities.

“Look, identity is not the only issue we gay men have. What about the consequences of coming out in the open? How shall we deal with that? How to deal with discrimination everywhere?”

Akkai Padmashali, an LGBT rights activist from Sangam, a Bangalore-based NGO, says that access to QRadio is limiting, since a listener must have a stable Internet connection. There must be ways to reach out to those living on the other side of the digital divide.

Padmashali, who is planning to host a new show on QRadio, would like to see a “large number of community radio stations all across the country that address LGBT issues.”

But more stations would require more funding – a thorny issue. According to Chandra, QRadio received some of its funding from the United Nations Development Programme, but “sustainability remains a serious issue.”

Some point to a deficit of trust between aid agencies and the alternative media. Priya Darshi, a Hyderabad-based community member, says he had planned to set up a community radio station, but it didn’t happen as “nobody was willing to support a group of strange people talking about rights and rules.”

Padmashali says “the moral responsibility [of funding] should lie on the Indian state.” She has met with many political leaders and ministers in recent months, including Manish Tiwari, the federal minister for information and broadcasting, whom she describes as “very sympathetic to the LGBT community.”

Subramanium, on the other hand, feels that besides aid agencies and the government, the corporate sector should also invest in radio for the LGBT community.

“There are a number of private radio channels which have great funding by the corporate houses. The fund shortage exists only in community radios. But dialogue and sensitisation can help build new partnerships. Corporate social responsibility could very well include funding radios that promote gender rights,” she says.

Both Padmashali and Subramanium, however, say that despite financial and technical constraints, radio for LGBT people is here to stay.

Subramanium, who often promotes gender rights on a community radio station run by the students of Pondicherry University, says: “Despite the support shown by mainstream media, most of our community members remain misunderstood and unheard. There is a great yearning in the LGBT community today to break the silence and be heard. Radio is the greatest tool to do that.”

Meanwhile, over QRadio, the voice of Rakesh echoes: “We need no validation from others…our community is enough to validate itself.”