SPOKANE, Washington, Feb 3 2014 (IPS) - Moral Monday, the populist movement in North Carolina that saw a diverse coalition of thousands of progressive activists descend upon the state legislature, is now spreading throughout the U.S. South.

“I think it’s a sign the body politic is healthy in the U.S. One of the cheap benefits of U.S. citizenship is the right to petition your government and protest unjust laws. I think it’s a sign of health, I expect that it will spread,” Janice Mathis, vice president of the Citizenship Education Fund, told IPS. 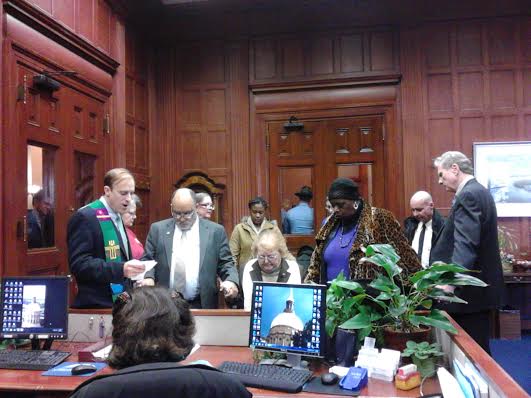 Protesters attempt to deliver a letter to Gov. Nathan Deal on Jan. 28 that explains the consequences of not expanding Medicaid, a social healthcare programme for low-income people, in the state of Georgia. Credit: Courtesy of Gloria Tatum, Atlanta Progressive News

North Carolina’s Moral Mondays have focused on opposing Republican redistricting and other voting changes, cuts to public education and social programmes, proposed changes that would increase the sales tax, challenges to abortion rights, and other issues.

So far this year, Moral Monday protests have started in Georgia, and “Truthful Tuesday” protests have been formed in South Carolina.

In Georgia’s second Moral Monday protest on Jan. 28, 10 activists were arrested for demanding to speak to the Republican governor, Nathan Deal, about expanding Medicaid in Georgia. 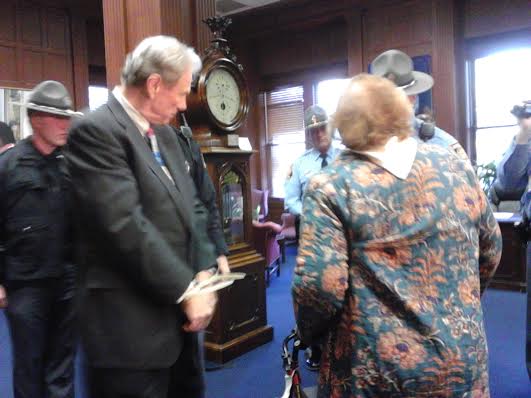 When Gov. Deal did not show up to receive the letter, the 10 quietly sat and waited for him. After 5pm, the Capitol police came in and informed the group that if they did not leave, they would be arrested. They refused to leave without giving the letter to the governor. Credit: Courtesy of Gloria Tatum, Atlanta Progressive News

Under the Affordable Care Act, commonly known as “Obamacare,” the federal government has offered billions of dollars to U.S. states to expand Medicaid to a larger category of low-income families.

However, in 2012, the Supreme Court ruled that the states do not have to accept this money and the federal government cannot punish them for it by withholding other funds.

About half of U.S. states, mostly under Republican governors, have refused to accept the funding. As a result, millions of U.S. citizens are going without access to non-emergency health care, and thousands of deaths each year can be attributed to this lack of health care, according to the Georgia Budget and Policy Institute.

Many of the states that have refused to accept federal Medicaid dollars are in the U.S. South.

“I think it’s very encouraging 10 people were arrested this Monday,” Mathis said. “We’re at a crossroads I think in the U.S. Shall we go forward as one nation committed to a basic standard of living as an American, or are we content with the worst income disparity in our history? 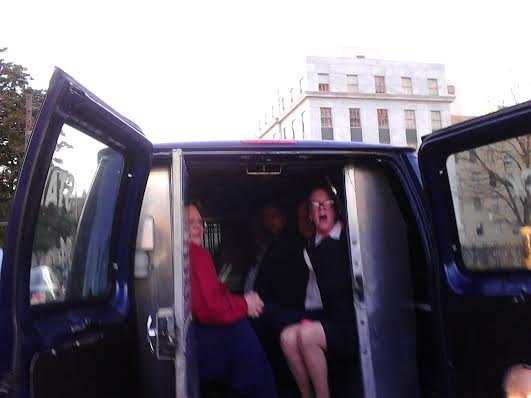 A 2011 study by the Congressional Budget Office found that the top earning one percent of households increased their income by about 275 percent after federal taxes and income transfers between 1979 and 2007, compared to a gain of just under 40 percent for the 60 percent in the middle of the country’s income distribution.

“It’s nice to see a movement birthed in the South,” Mathis said. “Southern states still have peculiar ways of viewing issues that is unique. It is no coincidence voter ID, [lack of] Medicaid expansion, overincarceration were ground zero in the Southern states.”

Repressive policies have “spread to Pennsylvania and Wisconsin and that’s unfortunate, but it has its roots in the South,” she said.

Meanwhile, in South Carolina, Truthful Tuesday activists held their first rally at the State Capitol there, and are hoping to begin weekly rallies soon.

“We did a rally that opened the session, Tuesday the 14th [of January], something that’s hard to pull off: middle-of-the-week, workday and it was raining. We had a thousand people,” Burt Bursey, executive director of the South Carolina Progressive Network, told IPS.

“Since then, we’ve had some meetings. We’re going back to the governor’s office Tuesday the 4th [of February],” he said.

As for why there is better turnout at the South Carolina rallies than in Atlanta, Georgia, he said, “it’s easier to organise in a small, backward state.”

One of the benefits of having protests on the same day every week is that everyone always knows when the next protest is.

Mathis said she is not worried about the smaller turnout in Atlanta thus far, because North Carolina’s Moral Monday started out small as well.

“We’re also at the beginning. We’ve got to continue to grow and expand it, bring in other groups, to expand it beyond the sort of usual suspects. It needs to expand beyond the activist core. It also needs to expand geographically, to all of Georgia’s 159 counties,” she said.