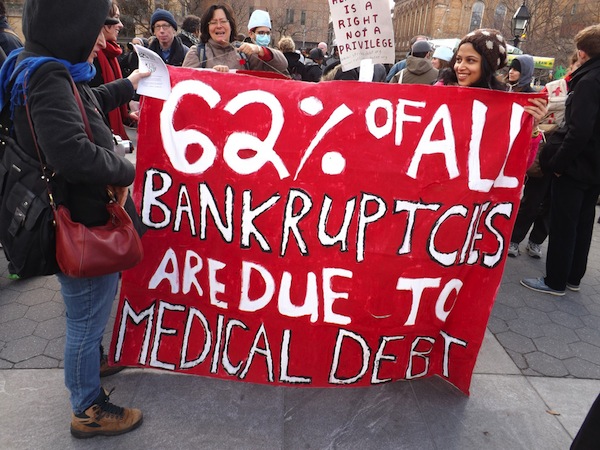 Strike Debt action on medical debt, held in New York in March. Credit: The Eyes of New York/ CC by 2.0

ATLANTA, Georgia, Apr 14 2013 (IPS) - Strike Debt, an affiliate of the Occupy movement, has devised a legal and what some consider ingenious way to abolish millions of dollars in consumer debt.

The project is called Rolling Jubilee, and by raising money from other citizen activists to purchase debt on the secondary market, Rolling Jubilee has purchased millions of dollars in unpaid medical debt that is – or, was – owed by consumers.

The secondary market is where companies go to sell bad debts, often for pennies on the dollar, to other companies who then try to collect the debts.

But instead of trying to collect the debts through practises that range from threatening letters to lawsuits, Rolling Jubilee is mailing letters to families saying that their debts have been forgiven. Thus the debt is actually being abolished for pennies on the dollar – a fraction of what it would have cost for the families to pay off the debts.

So far Rolling Jubilee has raised 578,795 U.S. dollars. With that they were able to purchase some 11.5 million dollars in medical debt owed on the secondary market by families who either live or once lived in Kentucky or Indiana.

They also previously made a small debt purchase of medical debt from upstate New York.

Most, if not all, of the money in the United States lent by banks is money that the banks never originally had in the first place, as previously reported by IPS.

In other words, most of the money that U.S. banks lend out is conjured into existence through a stroke on a keyboard, by way of a practise called fractional reserve lending, where banks are allowed to create and lend a certain multiple of funds that they have on deposit with the Federal Reserve.

That method is just one of the reasons Strike Debt believes that so much bank debt is illegitimate.

“Money is really created out of thin air,” Perisic said, who said the group had done extensive research on the matter. “This debt is really illegitimate, and it never should have existed in the first all place,” she added.

“The first thing is they [the families] should never had gone into debt for basic necessities in the first place. Beyond that, the fact that banks get a write-off when they discharge the debt, yet people are pursued to pay the full amount,” Perisic said.

Economist Ellen Brown said she thought the idea was interesting and noted that bankruptcy is the “original debt jubilee”. However, U.S. Congress and former President George W. Bush in 2005 made it more difficult for families who are not in poverty to discharge their debts through bankruptcy.

Brown suggested there is an easier way to forgive debts in the United States.

“The Federal Reserve could just step in and buy the debt. Let’s say they bought a trillion dollars in debt. When they rip it up, they add money into the money supply anyway,” Brown told IPS. “When you forgive the debt, it’s the same as giving them money, which creates demand, and the stores put in more orders to make the stuff – that’s how you stimulate the economy.”

The Federal Reserve has actually engaged in three rounds of quantitative easing, known as QE1, QE2 and QE3, purchasing bad debts from banks with the intent of freeing those banks to lend to consumers. However, the strategy has largely not succeeded, Brown said, because the banks have not used those funds to make new loans to small businesses or consumers.

Brown said she believed U.S. Congress and the President could authorise the Federal Reserve to buy and forgive student loan debt.

Not all, however, are convinced by Rolling Jubilee’s strategy.

“The Rolling Jubilee increases the profitability of [a] bad system by providing more revenues to the incumbents, while the debt purchases are unlikely to do more than help a few random people,” according to Naked Capitalism, a blog. “It might make for feel-good PR, but it won’t make a dent in the problem.”

Naked Capitalism also raised questions about the tax treatment of the forgiven debt and whether it would be viewed as income for tax purposes. However, Rolling Jubilee insists they have consulted with attorneys and that forgiven debt is not income.

“The Rolling Jubilee is just one of the projects of Strike Debt, so it’s part of a bigger picture, one of the big strategies we’re using to attack the debt system,” Perisic said.

“We started by holding different Debt Assemblies. It was really to just create a space where people can come and tell their debt stories…making that leap where people start envisioning, instead of something personal, it’s a systematic problem. I think that’s part of any organising around debt,” Perisic said.