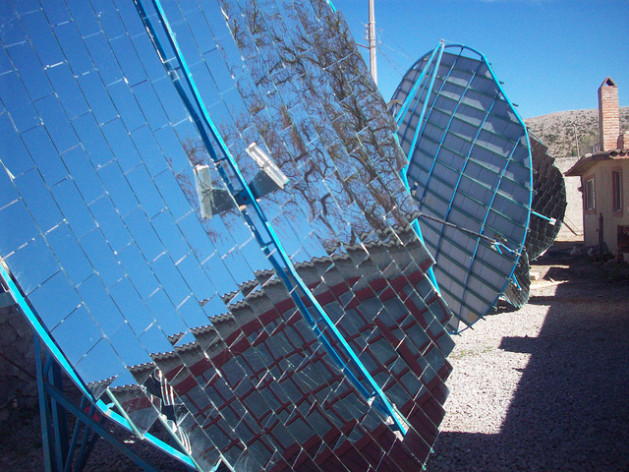 Currently, there are more than 300,000 solar installations in the U.S. Credit: Emilio Godoy/IPS

ATLANTA, Georgia, Mar 29 2013 (IPS) - A U.S. company called Mosaic has unveiled a new way for citizens to use the Internet to invest in specific solar energy projects around the country.

The low minimum investment amount of 25 dollars makes it easier for middle class people and even some working class people to invest. The company brings a 4.5 to 6.5 percent return on investment, which is a good rate in today’s economy.

Asked what makes the concept behind Mosaic unique, since people can already invest in solar energy using the stock market, Curtis replied that there are two typical options.

First, she said, you could perform “a solar installation on your home. That assumes you own a home, you meet the credit criteria necessary to get a solar installation, you have enough money to pay for financing, and that your roof is suitable. Seventy-five percent of roof space in the U.S. does not” meet the necessary criteria, Curtis said.

The second option is, “You can invest in a stock of a solar company. That is a very different experience than investing in a solar project,” Curtis said.

Mosaic sold out its first four projects in less than 24 hours with over 400 investors putting in between 25 and 30,000 dollars, the company said.

Today, the company boasts an investment of over 1.1 million dollars from over 700 investors, and a record of 100 percent on-time payments to investors.

Mosaic’s fully-funded past projects include a 487 kilowatt (kW) installation on the Wildwoods Convention Center in Wildwood, New Jersey; 1.5 kW on the Navajo Project of the Navajo Nation in Arizona; 9kW on the Murdoch Community Center in Flagstaff, Arizona; four installations on affordable housing complexes in California; and several installations in Oakland.

It will take a few years for the organisations to pay the investors back. However, they are seeing an immediate savings on their electricity bills.

“We see a massive transition coming from fossil fuels to clean energy, and we think people should be able to profit from that transition,” Billy Parish, president of Mosaic, said in a statement.

Previously, Parish, 31, dropped out of Yale University in 2002 to found the Energy Action Coalition.

“Mosaic is creating the architecture for mass participation in the clean energy economy,” Parish said.

Due to regulatory restrictions, Curtis said, investment opportunities in Mosaic’s latest projects are currently only available to residents of California and New York, as well as U.S. Securities and Exchange Commission (SEC)-accredited investors from around the country. However, the company hopes to expand its investment opportunities to other states soon.

The Department of Energy (DOE) explains on its website why those limitations are currently in place.

“This geographic restriction on investment in Solar Mosaic appears to be a product of how the company has chosen to comply with applicable regulations of the… SEC. Investments in Solar Mosaic projects are represented by ‘Solar Power Notes,’,” the DOE states.

“For public offerings… [the Securities Act of 1933] generally requires the company file a registration statement containing information about itself, the securities it is offering, and the offering. Registration can be a burdensome and costly process, and it is therefore in a company’s interest to avoid it when they can,” the DOE states.

While there are other organisations in the U.S. that are using a crowdfunding model to fund solar projects, they use a donation-based or zero-interest model.

“We’re the only one in the U.S. that is providing a return on investment,” Curtis said.

Internationally, there are already at least two other companies using a profitable crowdfunding model for solar energy: Crowd Energy, a company in Germany, and Abundance Generation in the United Kingdom.

Currently, there are more than 300,000 solar installations in the U.S., according to the U.S. Solar Market Insight 2012 Year in Review. This may sound like a lot; however, solar energy makes up only approximately one-tenth of one percent of the total U.S. energy portfolio.

But even this proportion represents progress, according to Charlie Coggershall, renewable energy manager for the Southern Alliance for Clean Energy.

“The biggest obstacle with solar energy is cost. The big reason Mosaic could be good it allows people to invest in it and benefit from it, without making big up-front investment,” Coggershall told IPS.

“Also, if you live in an apartment building, or are renting a house, or if your house wasn’t conditioned well or wasn’t structurally sound enough to put a solar installation on the roof, you would be unable to reap the benefits of solar energy,” without a programme such as Mosaic, Coggershall said.

“That certainly opens the door to a lot of solar projects,” he said.

“The real model that’s breaking through is sort of a big party financing model, big companies like Solar City, with power purchase agreements or leases to do the financing for solar and put it monthly payment model for you. That seems to be more of the breakthrough approach rather than the crowdfunding,” he said.

“It seems like it [the Mosaic model] could be useful for individual solar projects that need community funding to get started – some local initiative that isn’t attracting finance because it doesn’t have the players that can finance itself, or it wants to have the buy-in of the community,” Thomasson said.