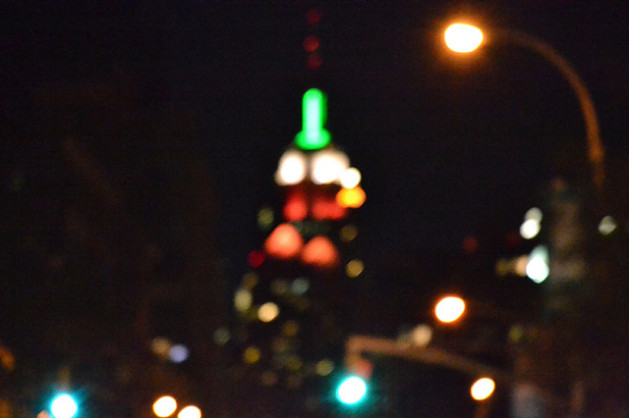 The Empire State Building viewed at night. Credit: NLNY/cc by 2.0

UXBRIDGE, Canada, Mar 19 2013 (IPS) - As usual, midtown Manhattan is packed with whisper-quiet cars and trams while thousands walk the streets listening to the birds of spring sing amongst the gleaming, grime-free skyscrapers in the crystal-clear morning air.

I think the public will be 100 percent behind this, if they know about it.

This is not a fantasy. It is a perfectly doable goal, said Stanford University energy expert Mark Jacobson. In fact, the entire state of New York could be powered by wind, water and sunlight based on a detailed plan Jacobson co-authored.

It’s not only doable, powering New York on green energy is “sustainable and inexpensive” and would save lives and health costs, Jacobson told IPS.

Each year, air pollution kills 4,000 people in New York State and costs the public 33 billion dollars in health costs, according to the study Jacobson co-authored with experts from all over the U.S. It will be published in the journal Energy Policy.

“Converting to wind, water and sunlight is feasible, will stabilise costs of energy and will produce jobs while reducing health and climate damage,” said Jacobson.

Under the plan, 40 percent of New York State’s energy would come from local wind power, 38 percent from local solar and the remainder from a combination of hydroelectric, geothermal, tidal and wave energy.

All vehicles would run on battery-electric power and/or hydrogen fuel cells. Heating and cooling for homes and businesses would come from air- and ground-source heat pumps, geothermal heat pumps, heat exchangers and backup electric resistance heaters – replacing natural gas and oil. Water heaters would be powered by the same heat pumps while solar hot water preheaters would provide hot water for homes.

High temperatures for industrial processes would be obtained with electricity and hydrogen combustion.

All of this can be accomplished with existing technology. The latest electric cars can travel 300 kilometres between charges, said Jacobson.

The significant costs of building renewable energy power plants, buying vehicles, heat pumps and other equipment are more than made up over time through savings in health costs and elimination of fuel costs by not having to buy any coal, oil or gas. The break-even point would be between 10 and 15 years, the study estimates.

The study also found that because green electricity is more efficient than burning fuels, New York’s end-use power demand would be 37 percent lower.

Electric vehicles convert 90 percent of the electrical energy from the grid to power at the wheels while conventional gasoline vehicles only convert about 20-25 percent, while the rest is lost as heat and noise. Coal and oil-fired electric power plants average just 33 percent efficiency and are major sources of air pollution and global warming.

Pollution costs from burning fossil fuels have largely been underestimated, according to new research. Canadian researchers found that the health cost to the public of driving a car or truck is 300 to 800 dollars per year per vehicle.

The public’s conception and official costs of pollution may be drastically undervalued, said Amir Hakami at Carleton University in Ottawa.

When the sun doesn’t shine or wind doesn’t blow, there are many ways to match energy supply with demand, the study found. All electrical grids rely on a number of power sources and fossil-fuelled and nuclear power plants are taken off grid sometimes for months and years for repairs. Geographically-dispersed renewables can be networked with hydroelectric power to fill in remaining gaps. Energy can be also be stored in various ways including as heat, water pumped uphill, and batteries.

Governments have invested very little in improving energy efficiency. The majority of research investment is devoted to generating more energy, said Charlie Wilson, a scientist with the International Institute for Applied Systems Analysis in Laxenberg, Austria.

Creating a low-cost, high efficiency refrigerator would do much to reduce energy and reduce carbon emissions, Wilson said.

But politicians don’t think building retrofits are sexy so public money goes into new power plants. The market won’t drive retrofits because the cost of energy is too low in most countries, he said.

Changing this won’t be easy. By far the world’s biggest corporations are the fossil fuel energy and power producers, who have enormous political influence, he said.

Leadership is needed to create a clean and healthy, pollution-free New York City by 2030, said Jacobson. “I think the public will be 100 percent behind this, if they know about it.”

“The economics of this plan make sense,” said Anthony Ingraffea, a Cornell engineering professor and a co-author of the study. “Now it is up to the political sphere.”