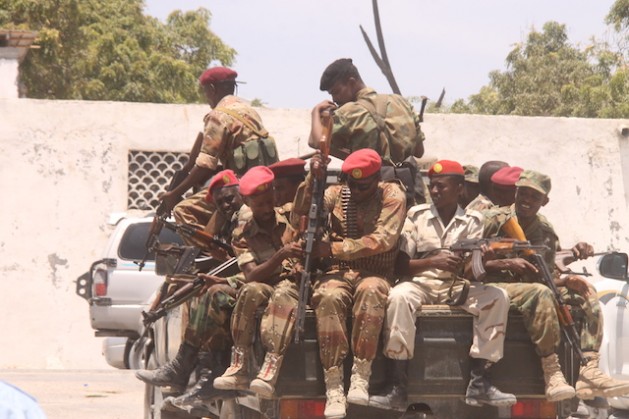 Somali Army soldiers patrolling a street in the capital Mogadishu on Feb. 23, 2014. Concern grows as hundreds of soldiers who were fired from the army in a restructuring drive protested against their termination of service. Credit: Ahmed Osman/IPS

MOGADISHU, Feb 27 2014 (IPS) - Residents of Mogadishu have raised concerns about their safety after the Somali army recently fired hundreds of disgruntled soldiers, many of whom are believed to still be in possession of their arms.

Somali military officials said early in February that 700 army soldiers were “relieved of their duties” following the restructuring of the army to make it a more professional force.

Somali National Army (SNA) chief General Dahir Khalif Elmi said that the sacked military personnel were unfit for service as they include elderly and disabled soldiers but added that they would be taken care of by the government.

“This is without a doubt adding to the insecurity in the city and other places because these soldiers do not have any other source of income and that is unsettling for all of us.” -- Mogadishu resident Hawa Ali

However, shortly after their sacking, hundreds of armed soldiers took to the streets in the Somali capital, Mogadishu, to protest against the decision.

“Releasing an army of 700 soldiers complete with their weapons into the city is not only dangerous to people’s security but outright irresponsible,” Ahmed Ahmed, a Somali lawmaker, told IPS.

Ahmed said that the soldiers could be potential recruits for the radical Islamist group, Al-Shabaab. The sacking of the soldiers comes just as the government and the African Union Mission in Somalia (AMISOM) announced that plans were under way to launch a military campaign against the extremist group Al-Shabaab.

Barre Farah, a retired Somali army officer, said that the decision to “retire” the army personnel was necessary to “modernise and professionalise” the Somali army but expressed doubt about the timing of the move.

“One cannot get why the army decided about it at this time and in this manner, which clearly can harm the security and possibly give ammunition to our enemy,” Farah told IPS in Mogadishu.

Farah said that there was a possibility that the sacked soldiers could join the insurgency as a last resort, thus making it difficult to remove Al-Shabaab from its strongholds in central and southern Somalia.

He, however, said he did not believe recent reports that claimed some of the fired soldiers and army officers had already joined the extremist group.

Soon after the soldiers’ dismissal, residents of Mogadishu, who are already weary of the growing insecurity and attacks on the capital, voiced concern that the soldiers could further destabilise the country.

“This is without a doubt adding to the insecurity in the city and other places because these soldiers do not have any other source of income and that is unsettling for all of us,” Mogadishu resident Hawa Ali told IPS.

Somali government soldiers have been accused of setting up illegal checkpoints in and outside Mogadishu and along thoroughfares that connect Mogadishu with south and central Somali in order to extort money from people. Many fear that the fired officers will now start doing the same.

Mohamed Ugaas, a teacher in Mogadishu, said that allowing the soldiers to leave the army with their weapons was a “recipe for disaster”.

The army remains tight-lipped about the weapons and it is not clear why they were allowed to take them home.

However, one sacked army officer, who asked for anonymity for fear of reprisals, said that although most of the soldiers still had their weapons, they are not a threat to the security of Mogadishu.

He added that none of the 700 soldiers have joined the militants and called the reports baseless.

“We are angry about how we were dealt with by the army chief but that has never made any one of us contemplate joining a terrorist group we fought against for years. That is impossible,” the ex-army officer told IPS.

He said he hoped the international community would intervene and help them integrate into civilian life for which they are “not prepared”.

“We need those of us unable to work because of age or disability to be given a decent pension and care. And those willing and able to work need to be retrained to get civilian work or given financial support to start a business,” the former officer said.

However, Somali government military officer, Commander Yasin Jaylani, explained that the sacked soldiers would be taken care of and that new agency would soon be set up to facilitate this.

“You don’t expect the army to simply fire soldiers at random and not have plan to care for them. That is not the case and will never be the case in the future. We are modernising our army to better serve the country,” Jaylani told IPS.

He declined to comment on the allegation that the army did not disarm the fired soldiers saying that will be “looked into”.