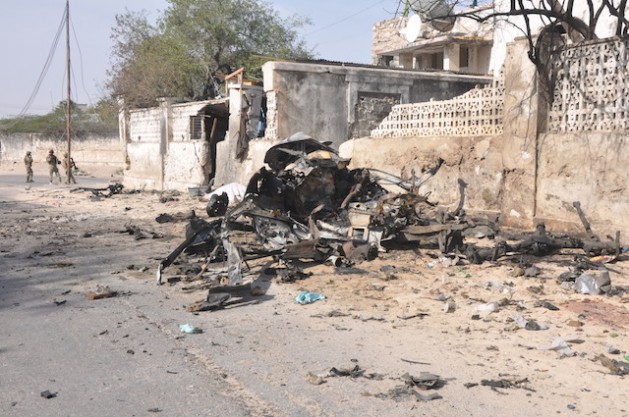 Wreckage of one of the suicide car bombs used to attack the presidential palace in Mogadishu, Somalia’s capital on Friday Feb. 21, 2014. Nine militants were killed in the attack. Credit: Ahmed Osman/IPS

MOGADISHU, Feb 24 2014 (IPS) - As the Somali government plans to launch a new military campaign to wipe out the Islamic extremist group, Al-Shabaab, from its strongholds in this Horn of Africa nation, experts say that its Somalia’s innocent who live in areas controlled by the group who will suffer the most.

On Friday, Feb. 21, the Al-Qaeda-linked Al-Shabaab launched an unprecedented and brazen attack on the presidential palace in the capital Mogadishu in which 12 people, including nine militants from the extremist group, died.

“We expect insurgent activities in the short term even if the group is defeated militarily ... But I think Al-Shabaab can be eradicated from the region." -- Mohamed Muse, military analyst

Shortly after, the government and the African Union Mission in Somalia (AMISOM) announced that plans were under way to launch a military campaign against the extremist fighters.

Senior Somali government military commander Ise Guled told IPS in Mogadishu on Monday, Feb. 24 that preparations for “the final onslaught” against the radical fighters’ strongholds in south and central Somalia were “in their final stages”.

“We will launch the offensive in conjunction with our allies against this group and get rid of [this] menace once and for all,” he said. He declined to say when it would commence.

However, Yusuf Alay, an academic in Mogadishu, told IPS that the group’s “oppression” on locals would increase as military pressure on Al-Shabaab mounts.

Al-Shabaab has been ousted from much of southern and central Somalia but the group still controls parts of the country where it imposes strict Islamic Sharia law, and recruits and trains fighters.

Alay expects the group to start imposing stricter curfews and a blanket ban on the use of smartphones in areas under its control. Already Al-Shabaab has forced the biggest telecoms company here to switch off its mobile internet service.

Alay also expects more youths to be indoctrinated into the group’s extremist ideology and forcibly recruited to join.

“The radical group enforces a stricter form of Sharia law, where people are still subjugated to the worst forms of punishments. [It also] levies huge taxes on the people who are already poor, to finance their activities following the loss of key ports in the south,” Alay said.

He added that while people would be negatively affected if the militants resisted and fought against advancing troops, in the long run those who live in “Shabaabistan” (Al-Shabaab territory) would be better off not being under Al-Shabaab rule.

Mohamed Muse, a military analyst in Mogadishu, said the campaign against the extremist group has been in the making for months now but gained new impetus after Al-Shabaab’s deadly attack on the Westgate Mall in the Kenyan capital, Nairobi, last September. At least 72 people were killed when Al-Shabaab militants stormed the mall.

“We know that there has been a clear understanding of the need to finish off Al-Shabaab on the part of the Somali government and AMISOM so that the task of rebuilding the nation can proceed unhindered. So it is just a matter of when such a move [will] materialise,” Muse told IPS in Mogadishu.

Last month, following the United Nations Security Council authorisation of an increase in AMISOM peacekeepers, nearly 4,300 Ethiopian troops were added to the existing force of 17,500.

Matt Bryden, director of Sahan Research, a think tank based in Kenya, said in a new report for the Centre for Strategic and International Studies’ African Programme that Al-Shabaab would likely lose all of the territory under its control in the event of a military offensive.

“As a reinforced AMISOM prepares to resume offensive operations, Al-Shabaab is likely to suffer military reverses – including the loss of its remaining strongholds,” Bryden said in the report.

Bryden said that the militant group has, for some time, been preparing for an “asymmetrical struggle”, as they anticipate defeat in the face of the offensive. He contends the strategy “would permit Al-Shabaab to survive as a potent force in Somalia and the region.”

“For the near term, Al-Shabaab is not playing to win but to survive, subvert and surprise,” he said.

Muse agreed but said the challenges would be manageable if the political wrangling among Somalis were solved before it became a problem.

“We expect insurgent activities in the short term even if the group is defeated militarily, and that is always the nature of counter-insurgency operations. But I think Al-Shabaab can be eradicated from the region,” said Muse.