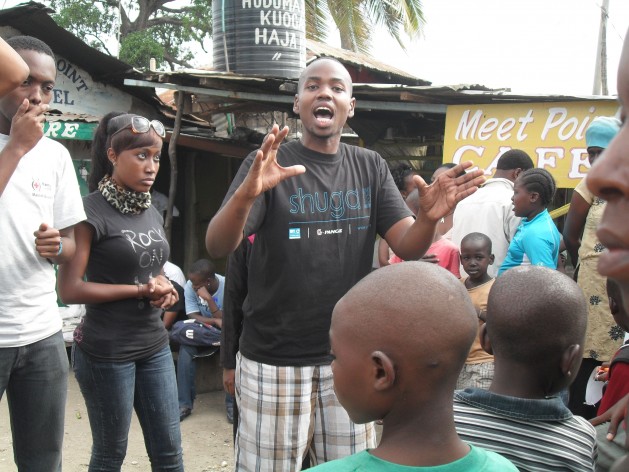 The Talent Tappers performing in Mombasa as a crowd gathers to watch their act. Many struggling artists are hopeful that the industry will change for the better. Photo: Miriam Gathigah/IPS

Nyongo’s global success, cemented by her Academy Award win on Mar. 2, has proved that, “Just like medicine or teaching, entertainment can be a serious career choice particularly for the many unemployed and talented youths in the country,” says Nairobi-based market analyst Danson Mwangangi.

But that new attitude to the arts is only just developing.

From Nairobi to Hollywood

Many Kenyan theatre aficionados like local playwright Peter Nderi remember 31-year-old Nyong’o as Juliet in Shakespeare’s classic play performed at the Phoenix Players here in Nairobi. “She was only 14 years old but even then, she showed great promise as an actor,” Nderi tells IPS.

But Nyong’o’s success, he says, has not been overnight. Hollywood’s newest it-girl paid her dues working as part of production crews for various films, including “The Constant Gardener”, “where she ran errands, including fetching the cast coffee,” says Nderi.

He also points to Nyong’o’s 2007 feature-length documentary “In My Genes”, which explores the challenges people with albanism face as a minority group in Kenya and which Nyong’o wrote, directed and produced.

Born in Mexico to Kenyan parents, Nyong’o was raised in Kenya where she honed her acting skills on the local theatre  circuit before attending Yale School of Drama, one of the United States’ most renowned acting programmes.

For Kenya, which is seeing some 40 percent of its workforce unemployed – 70 percent of those being people below the age of 35 – victories like Nyong’o’s are a happy note in the effort to develop a vibrant entertainment sector that could lift the economy.

“It is the new frontier for job creation,” Mwangangi tells IPS, adding that the government, through the Kenya Film Commission, has set an objective to generate 10 percent of its gross domestic product (GDP) from the entertainment industry, incuding all creative and cultural activities.

But the entertainment industry is not for the faint-hearted, local performers say, whose experiences highlight that the country still has a long way to come before it sees cultural activities as a valid profession.

“The main problem is that many people have not fully appreciated that entertainment is a job just like any other and they are not willing to pay to watch a performance,” says Paschal Kilei, a struggling actor with a talent group called ‘Talent Tappers’ in Mombasa County in Kenya’s Coast Province some 482 km from the capital Nairobi.

As a result, Kilei and his colleagues have been left to perform for free in the hope that, with time, people will begin to appreciate their work and pay to watch them perform.

The Talent Tappers do “magnate theatre”, in Kilei’s words, consisting of random performances in market places, bus stations, “Basically anywhere where there are a large number of people going about their business.”

And while their acts are well received, it hasn’t brought them any money yet.

Kilei is not alone. Asia Majimbo, another Mombasa-based actor, says that even for established performers the pay is not enough to fully depend on their craft.

“TV actors who earn about 250 dollars per episode are actually the envy of many,” says Majimbo. “In a month, about four episodes will air, or even less. And an actor may not even appear in all the episodes unless they are the main characters.”

Nderi highlights a lack of formal training as another factor impairing the industry.

“Many actors-slash-actresses in the country take on acting as a hobby, so they do not fully invest in it by trying to get some training in it, which affects the quality of their work.”

While not every Kenyan performer has access to a Yale drama eduction to set themselves apart like Nyong’o, Kenyan actors need not be discouraged, says Mwangangi.

The government’s keenness to boost the economy through enterntainment has already resulted in a mandate for the Kenya Film Commission to establish a film school in the country, he says, while Kenya’s 47 counties have all been encouraged to promote the entertainment industry as an avenue for job creation.

In building the industry, Kenya has a big brother on the continent to learn from, according to Mwangangi. “Nollywood, which is Nigeria’s film industry produces about 50 movies per week — much more than what Hollywood produces… second only to India’s Bollywood,” he says.

Both Nigeria and Kenya are particularly poised to reap the benefits from their expanding middle class, acording to the analyst, with Kenya’s middle-bracket income earners having doubled to 6.5 million in the last decade, according to the African Development Bank.

Although Kenya’s film industry still lags behind Nigeria’s, it has been growing steadily in the last seven years, according to Kenya’s Film Commission, which boasts an 85-percent growth in the number of film establishments and an increase of over 45 percent of people involved in the industry.

“The Samaritans”, a comedy series centered around the absurdities of a dysfunctional NGO in Kenya, is a recent example of a Kenyan production garnering international attention, with clips and reviews making its rounds on top news sites and social media.

Hussein Kurji, producer of “The Samaritans”, tells IPS that he was looking for something “innovative.” And he’s seeing his efforts pay off.

Kurji and Nyong’o exemplify the ability for Kenyan entertainers to excel in spite of challenges posed by a still-nascent industry.

They also embody a creative spirit that Kenya hopes to tap to attract people to the fledgling sector, perhaps best summed up in Nyong’o’s parting words at the Oscars: “…No matter where you are from, your dreams are valid.”