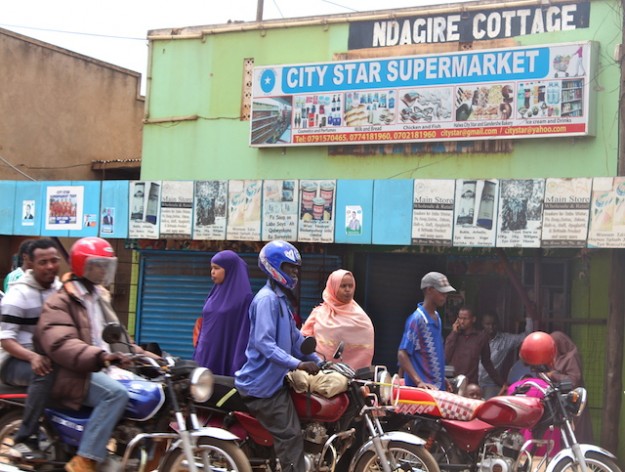 Kisenyi slum, in Uganda’s capital, Kampala is believed to be home to a large portion of the country’s almost 12,000 Somali immigrants. Credit: Amy Fallon/IPS

KAMPALA, Mar 31 2014 (IPS) - On a Friday afternoon men wearing kamis — long white traditional robes — climb the steps to Somcity Travel, a small family business and travel agency in Kisenyi slum, in Uganda’s capital, Kampala. The agency boasts that they “fly all over the world” but to one destination in particular — Somalia.

“In a day we may have up to five customers – four of them will usually be Somali,” says Mohamed Abdullahi, 25, the manager of Somcity Travel. The travel agency is situated opposite the the Al-Baraka cosmetic store and the Cadaysay shop, which provides mobile money transfer services and sells mobile phones and phone accessories.

“Some of them go [back] for holidays to Somalia. But they always come back. The business is kind of booming. We are booking a lot of tickets,” he tells IPS.

Kisenyi, informally known as Little Mogadishu, has been the heartbeat of the Somalia community in this East African country since the 1990s, according to Abdullahi.

But it was only in 2002 that businesses here started to take off. Today, Kisenyi’s streets are dotted with travel agencies, hotels, restaurants, petrol stations, supermarkets and other businesses — all of which are Somali-owned. And there is also a mosque.

“We are very tough when it comes to business, sometimes we can even challenge Indians,” Abdul Kadir Farah Guled, Charge De Affairs at the Somali embassy in Kampala, who came to Uganda around 1974, tells IPS.

“But our problem is our hot tempers. Sometimes we don’t like each other because of tribal conflicts. But at the end of the day, we support each other.”

Official statistics are hard to come by, but he estimates there could be up to 12,000 Somalis scattered throughout Uganda and that about 85 percent of Kisenyi’s population is Somali, with a large number of them being refugees and Ugandans of Somali-origin. It is believed that the slum could be home to over 4,000 Somali refugees.

The area is a place of transition for many — a stepping stone to a better life for many residents and workers.

“Somalis get respect from Ugandans and the government also supports Somalis,” says Abdullahi. Above his desk, a framed portrait of Uganda’s President Yoweri Museveni stares down at him. On the wall alongside it is a Brussels Airlines poster declaring “Africa, all wrapped up for you.”

Abdullahi used to live in Towfiq in the Somali capital, Mogadishu. In 2007, he left the Horn of Africa nation, along with relatives and friends, aged just 17.

“I came here to get an education and live a life [that is] different from [the one I lived] in that place where there is civil war,” he says.

Militants belonging to terrorist network Al-Shabaab were flushed out of Mogadishu in 2011 but still control many rural areas of the country today.

When Abdullahi came to Uganda, where his uncle, Ahmed, had resettled in 2003, he couldn’t speak English. In Somalia the official tongue is Arabic. But today Abdullahi converses impeccably in English and has completed both his O and A levels. Now he works six days a week at Somcity Travel, earning about 200 dollars a month.

“It’s getting better in Somalia but there are still some problems, like homes are bombed. There’s a problem walking at night.”

For most Somali’s coming to Uganda for the first time, the language barrier is a big problem says Shukri Islow, 28, the founder of NGO Somali Youth Action For Change. She founded the organisation to help empower Somalis here and bridge the gap between the two communities.

“When you know the language you feel a sense of belonging,” says Islow, who was born in Somalia and left the country when she was eight. She has lived in Sweden, Egypt and Saudi Arabia, before settling in Uganda in 2009.

“We give them that inspiration, motivation and empower them that they can do it it’s never too late, even if you’re 20.”

Today Islow, who graduated in November from Uganda’s Cavendish University with a bachelor’s degree in international relations and diplomacy, is the face of the Somali youth community in Uganda.

She also counsels  Ugandan African Union Mission in Somalia (AMISOM) soldiers who are deployed to her homeland on how different Somalia is and what to expect when they get there.

Uganda was the first country to deploy troops under AMISOM to Somalia in 2007. A 22,000-strong AU force operates there under a United Nations mandate. Uganda leads the force, with 6,223 troops, but in early March said they would send up to 410 extra to guard U.N. facilities.

The last time Islow was in Somalia was in 2002 when the situation was “much, much better”.

“Right now you don’t know who’s going to kill you tomorrow, and you don’t know the reason. You’re being attacked for your lifestyle or ideology,” she tells IPS.

She’s aware that even if she returns home for a holiday she will be a target.

“I’m more at risk [from Al-Shabaab] if I go there because I’m all over social media and my pictures with Ugandan soldiers are [online],” says Islow.

She has relatives still living in Somalia and, eventually, she would like to return home permanently.

“Of course I’d like to go back because you go east and west, home is the best,” she says.

For the time being she will continue to live elsewhere and hopes to further her studies in Melbourne, Australia.

Abdullahi also hopes to do the same. He has an uncle in Australia and has enrolled in a management course that starts in July at a Sydney college.

“I want to continue with my education and at the same time work and have a new life, a better life, get married and have kids,” he says.

In January, the Somali Embassy in Uganda held its first-ever engagement with the Somali diaspora here to discuss the ongoing stabilisation and peace process in the Horn of Africa nation. Officials hope that educated youth, like Abdullahi and Islow, will return to help rebuild the country.

Already the diaspora has contributed much to Somalia. A 2011 report by the U.N. Development Programme estimates that the Somali diaspora is between one to 1.5 million people. The report stated that Somalis abroad provided much-needed humanitarian assistance back home through remittances – estimated between 1.3 to two billion dollars a year.

Abdullahi hasn’t returned to Somalia since he left. And if he does, like many of his clients, it may not be on a one-way ticket.

“Now I’ve adapted to this life of living abroad and some things are not favourable in Somalia so I can’t live there for good,” says Abdullahi.