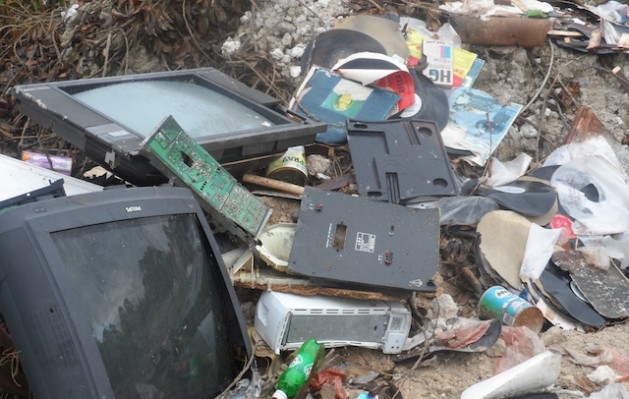 The Westlea dumpsite near the low-income settlement Warren Park, west of Zimbabwe’s capital, Harare. Here electronic waste such as old tvs and microwaves, which contain hazardous substances such as mercury and lead, are dumped with regular waste. Credit: Tatenda Dewa/IPS

HARARE, Mar 25 2014 (IPS) - Electronic waste in Zimbabwe is becoming “an emerging environmental crisis that is by and large unheralded,” according to Steady Kangata, the education and publicity manager of the government-run Environmental Management Agency (EMA).

“It can grow out of control if solid action is not taken,” Kangata told IPS.

He said that individuals, backyard or informal businesses, and large companies were “indiscriminately” disposing of electronic items such as old tvs, radios, computers and microwaves, which contain hazardous substances.

“These waste products are harmful because they contain toxic material such as mercury, lead and carcinogens that, if inhaled or ingested, can have far-reaching effects on people’s health.

Increased consumerism in this southern African nation has not been matched by appropriate disposal systems and hence e-waste was becoming a real danger.

“Some of the e-waste is flammable and radioactive and contains elements that can affect the reproductive and nervous systems. It accumulates underground and is thus an environmental danger,” explained Kangata.

He said that increased consumerism in this southern African nation has not been matched by appropriate disposal systems and hence e-waste was becoming a real danger.

It’s also the country’s poor who are at risk.

For the last 10 years, Jairos Zimombe from the low-income settlement Warren Park, which lies just west of the capital, Harare, has been unemployed but he has made a modest living retrieving and selling plastic and other forms of garbage from the nearby sprawling Westlea dumpsite.

But the perennially smoking site also contains a broad assortment of garbage. And every day scores of garbage pickers rummage through the dumpsite in search of scrap metal, used plastic, rubber containers as well as electrical components that they sell at downtown markets.

Kangata pointed out that garbage pickers, like Zimombe, were “constantly exposed to electronic waste, but the tragedy is that most of them are not even aware of the danger of the discarded items.”

Indeed, the 45-year-old Zimombe is adamant that there is no health risk associated with his informal job.

“My only worry with this smoke is that sometimes it makes me cough. Otherwise I don’t see any problem with the items [e-waste] that you are talking about. How come the municipality keeps dumping these things here and does not warn us?” he told IPS.

According to Kangata, local municipalities should properly dispose of e-waste by separating it from ordinary trash.

However, the country’s Environmental Management Act and city by-laws do not specifically state that municipal authorities should do this.

In addition, most local city councils have failed to regularly remove heaps of garbage in residential areas. Phillip Mutoti, mayor of Harare’s dormitory town, Chitungwiza, told IPS that financial constraints were hampering garbage collection. He added, however, that his municipality cleared refuse once a week.

“Most residents and local companies are defaulting on rates payments and we are struggling financially. We have a limited number of refuse trucks though we hope to get more with time,” he said, admitting that the garbage collectors did not separate the waste.

Shamiso Mtisi, head of research at the Zimbabwe Environmental Law Association, told IPS that the country has “no clear and comprehensive position on e-waste.”

“The Environmental Management Act has regulations that provide for the disposal of hazardous waste, but that law does not address the issue of e-waste per se,” Mtisi explained.

In 2012, Zimbabwe ratified the United Nations-initiated Basel, Rotterdam and Stockholm conventions that restrict the transboundary transfer and disposal of organic pollutants and other forms of waste. It also regulates the management of harmful chemicals.

And in 1993 Zimbabwe also ratified the Bamako Convention that prohibits the importation into Africa of hazardous waste. These conventions, however, do not address the issue of e-waste.

“As a result, culprits who inappropriately handle e-waste tend to get away with murder as they are lumped together with lesser offenders…and pay low fines if they are brought to book. This legal omission also means that there are no specific systems to handle e-waste,” Mtisi explained.

According to Kangata, the fine for illegally dumping any form of waste ranges from five to 5,000 dollars. Municipal authorities and the EMA set the fines according to the amount of waste dumped and the danger it poses to public health.

However, the Combined Harare Residents’ Association (CHRA) is concerned about the lack of proper systems to manage e-waste and fears that the public is at risk.

“There is need for an urgent collaborative approach between municipalities, residents associations, the EMA as well as other environmental experts to devise a working mechanism to cope with e-waste. Primarily, residents need to be educated on the dangers of and best ways to manage e-waste disposal and this calls for massive public awareness campaigns,” Simba Moyo, CHRA chairperson, told IPS.

Such campaigns could possibly save Zimombe’s health and that of his children. During the school holidays, he brings his two teenage sons to the dumpsite to help him rummage for trash to sell, exposing them to the hazards of the toxic waste.

According to the World Health Organisation’s website: “Children are especially vulnerable to health risks that may result from e-waste exposure and, therefore, need more specific protection.”

But Zimombe is still unconvinced of the dangers, though he admitted that he suffers from lingering headaches, frequent breathing problems, and he sometimes has difficulty sleeping.

Like most garbage pickers and traders who visit dumping sites in the capital, he does not have the money to go for a medical check up, let alone to pay for any treatment he may require.

“I can’t afford the luxury to go for medical check-ups. Poverty is what has forced me to do this kind of job in order to look after my family. For as long as I am walking and can come here, all is well. I will stop when I get seriously ill.”