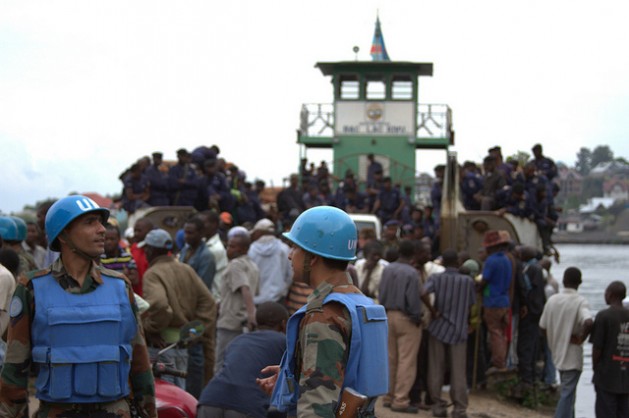 National police arrive on a boat at Goma's port in DRC as U.N. peacekeepers look on. Credit: William Lloyd-George/IPS

WASHINGTON, Apr 15 2014 (IPS) - The United States’ second-highest court has upheld most of a landmark U.S. law requiring companies to ascertain and publicly disclose whether proceeds from minerals used to manufacture their products may be funding conflict in central Africa.

The ruling, released Monday, means that U.S.-listed companies will need to file their first such reports with federal regulators by the end of May. The statute, known as Section 1502 and covering what are referred to as “conflict minerals”, became law in 2010, but the details of its actual implementation have remained up in the air ever since.

The ruling is “a major step backward for atrocity prevention in the Great Lakes region of Africa and corporate accountability in the United States.” -- Holly Dranginis

“There are very encouraging aspects of this ruling, and the bottom line is that the rule hasn’t been overturned and now companies will need to move forward,” Corinna Gilfillan, head of the Washington office of Global Witness, a watchdog group that supports Section 1502, told IPS.

“The heart of this statute is companies carrying out due diligence on their supply chains so they can figure out whether their minerals are coming from conflict areas. Due diligence is a process – first knowing the supply chain and then taking action to address any problems. This ruling has upheld the due diligence and reporting aspects.”

The U.S. Congress hoped Section 1502 would help quell the violence that has wracked Africa’s Great Lakes region, particularly in parts of the Democratic Republic of Congo (DRC), for the past decade and a half. Findings by the United Nations, rights groups and others have warned that rebels in these areas have funded their operations in part by mining and selling any of five minerals that have become particularly sought after by the international electronics industry.

The rule has come under attack by U.S. business groups who say the requirements would be onerous and infringe on their constitutionally guaranteed right to free speech, by forcing them to label their products “conflict free”. But agreeing with previous rulings, a three-judge bench on Monday dismissed most of these concerns.

The dismissal included business concerns that the Securities and Exchange Commission (SEC) had not adequately analysed costs and benefits of the regulation.

“The rule’s benefits would occur half-a-world away in the midst of an opaque conflict about which little reliable information exists, and concern a subject about which the [SEC] has no particular expertise,” the court stated in its decision.

“Even if one could estimate how many lives are saved or rapes prevented as a direct result of the final rule, doing so would be pointless because the costs of the rule – measured in dollars – would create an apples-to-bricks comparison.”

Yet the court also offered a split decision in favour of the manufacturers on the free speech concern, allowing both proponents and critics of Section 1502 to claim victory.

U.S. law allows for certain “compelled” public disclosures, but generally only if those are recitations of straight fact. However, the court found the issue of conflict minerals to be far more complex.

“[I]t is far from clear that the description at issue – whether a product is ‘conflict free’ – is factual and nonideological. Products and minerals do not fight conflicts,” the court stated.

“The label ‘conflict free’ is a metaphor that conveys moral responsibility for the Congo war. It requires an issuer to tell consumers that its products are ethically tainted, even if they only indirectly finance armed groups … By compelling an issuer to confess blood on its hands, the statute interferes with that exercise of the freedom of speech.”

It is unclear whether the SEC will appeal this part of the decision to the U.S. Supreme Court (the agency says it’s reviewing the ruling). For now, the decision undermines a key strategy for groups hoping to use a labelling requirement to shame companies into compliance, though related information will still be publicly available.

The ruling is “a major step backward for atrocity prevention in the Great Lakes region of Africa and corporate accountability in the United States,” Holly Dranginis, a policy associate with the Enough Project, an advocacy group here, said Monday.

“The court’s proposal that a conflict-free determination is ideological is unfounded and undercuts the power of society’s growing awareness that global markets and security in fragile states are in fact linked.”

Meanwhile, a separate case before the same court could soon undermine the free speech finding. A smaller bench has already ruled in favour of requiring meat producers to include “country of origin” information on their products, and the case is now slated to be heard by the full court in mid-May.

A dissenting opinion in the conflict minerals ruling noted that the meat-labelling decision could have a significant impact on Monday’s ruling.

The complexities of implementing Section 1502 remain highly problematic in central Africa, and some are warning that the law could soon collapse under its own weight. Yet others say the regulation is already having a noticeable impact, with the Enough Project suggesting that “over two-thirds of tin, tantalum and tungsten mines [are] now free of armed groups.”

Monday’s ruling should now allow the U.S. side of the statute’s implementation to proceed. This means that around 6,000 U.S. companies will need to file reports with the SEC, and post them to company websites, by the end of May.

The lawsuit against Section 1502 was brought by three of the United States’ largest business lobbies, the National Association of Manufacturers (NAM), the U.S. Chamber of Commerce and the Business Roundtable. In a joint statement sent to IPS, the three lauded the decision.

“[W]e are pleased with the D.C. Circuit’s decision … finding the statute and regulation are unconstitutional,” the groups stated. “We understand the seriousness of the humanitarian situation in the Democratic Republic of Congo (DRC) and abhor the violence in that country, but this rule was not the appropriate way to address this problem.”

Yet other businesses are already complying with the spirit of Section 1502. Perhaps the most significant of these companies, Intel, is actually a member of NAM.

In January, the company pledged to remove all conflict minerals from its microprocessors. It says it now has no plans to change course.

“Regardless of this decision, we will continue to do our part to achieve conflict-free supply chains and to report publicly on these efforts,” Lisa Malloy, an Intel spokesperson, told IPS.

“The challenge of responsible minerals sourcing requires a comprehensive solution that involves government agencies in the U.S. and internationally, non-profit groups and industry. We urge all partners to continue the momentum towards a solution.”