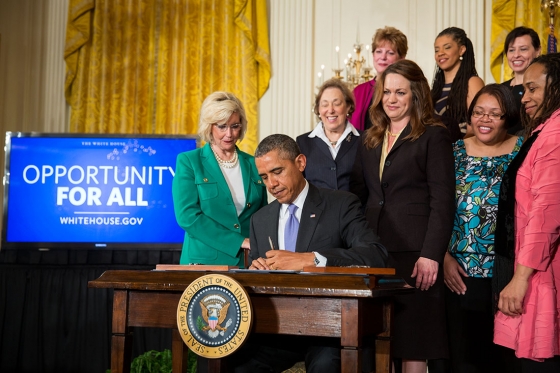 WASHINGTON, Apr 9 2014 (IPS) - Since his re-election in 2012, President Barack Obama has stepped up his rhetoric around gender equality issues in the United States, but he has yet to get a partisan U.S. Congress to go along with a series of legislative proposals he put forward.

While the non-legislative executive orders he unveiled on Tuesday deal only with narrow issues, supporters say they offer an important initial attempt on Obama’s part to address stubborn disparities between how much money U.S. men versus women take home.

“Women make up nearly half of the nation’s workforce and are the primary breadwinners in 4 in 10 American households with children under age 18,” the president stated Tuesday in a speech at the White House. And yet “women still make only 77 cents to every man’s dollar. For African American women, Latinas, it’s even less.”

Obama said such statistics are an “embarrassment”. He is now calling on lawmakers and the public to recognise that it is the time for a valuation of individual’s contribution to the economy based solely on merit – and that this should not be constrained by gender.

Obama’s mandate will affect federal contractors, requiring that they publish wage data by both gender and race in order to ensure they’re complying with laws on wage equality that are already on the books. A second order prohibits those contractors from taking actions against employees who compare their salaries.

Tuesday is marked in the United States as Equal Pay Day.

“These orders … will help erase Equal Pay Day from the calendar,” the National Organisation for Women (NOW), and advocacy group, said Tuesday. “NOW applauds the executive orders President Obama is signing today, and what it represents — a step towards equality for women. It’s about recognising women’s work as equal to their male peers – and above all else, fairness.”

Some researchers suggest the wage-gap problem in the United States could be even greater than Obama indicates.

“Most studies I have seen that include many other characteristics of workers and the jobs using the same data tend to leave about 30 percent of the gender gap unexplained,” Jeffrey Hayes, study director at the Institute for Women’s Policy Research (IWPR), a think tank, told IPS.

Hayes warns that it is possible to “overcontrol” such models.

“For example, you can statistically control for the occupations and industries in which women and men work and this would explain some of the gap,” he says. “But if access to the good-paying jobs is one of the mechanisms that could be discriminatory, the researcher could be underestimating discrimination if only the unexplained part is considered as potential discrimination.”

Despite long understanding of the issue of gender-based wage gap in the United States, the situation appears to have stayed roughly the same for at least the past decade.

According to a comprehensive 2013 IWPR study, the earnings gap – measured as the ratio of women’s median annual earnings for full-time year-round workers – was 76.5 in 2012, thus corroborating Obama’s figure. Further, that study indicates this number remained unchained since 2004.

The gender wage gap is “not a myth”, Obama said Tuesday. The IWPR study concurs, stating this disparity is “a reality for women across racial and ethnic groups”.

President Obama has previously signed a bill that should help bridge the wage disparity between male and female. In fact, the Lilly Ledbetter Fair Pay Restoration Act of 2009, named after a retired tire plant supervisor who discovered she was paid far less than her male counterparts, was the first bill signed by the president upon taking the office.

“From signing the Lilly Ledbetter Fair Pay Act to establishing the Equal Pay Task Force, I have strengthened pay discrimination protections and cracked down on violations of equal pay laws,” Obama said Tuesday.

“And I will continue to push the Congress to step up and pass the Paycheck Fairness Act, because this fight will not be over until our sisters, our mothers, and our daughters can earn a living equal to their efforts.”

Yet according to some estimates, the gender wage gap continues to extend right into the White House. A recent analysis by the American Enterprise Institute (AEI), a neoconservative think tank, found that female White House staff members on average earn 88 cents for every dollar that male staffers make.

Yet the National Organisation for Women is urging quick passage of the PFA.

“The Paycheck Fairness Act helps women fight the wage gap by requiring greater transparency from employers – who would have to show that wage differences are job-related and not gender-based – and protects employees from retaliation when they share information about compensation,” the group said Tuesday.

“NOW urges the Senate to pass this bill immediately. If equal pay for women were instituted immediately, across the board, it would result in an annual $447.6 billion gain nationally for women and their families. Over fifteen years, a typical woman loses $499,101 because she is paid less than a man. It’s unacceptable.”