Philippe Cori, director of the United Nations Children’s Fund’s (UNICEF) European Union Partnership Office in Brussels, says over the last decades, development assistance from partners like the EU and its member states has been critical to expanding and improving the quality of basic social services, especially for the poorest and most marginalised children. 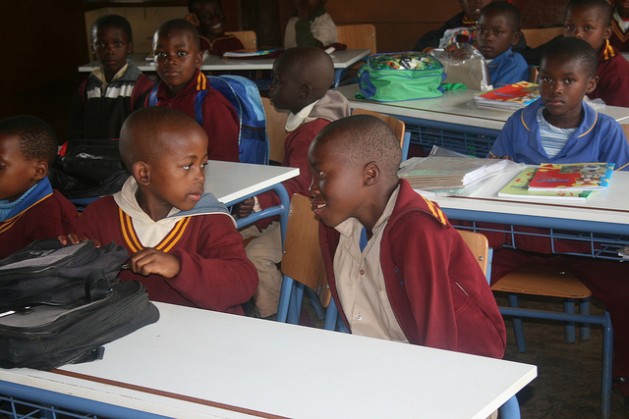 UNICEF says in many parts of the African continent children are living beyond their fifth birthday, more children are going to school and more children are better equipped for the challenges of the 21st century. Pictured here are students at Motshane Primary School, Mbabane, Swaziland. Credit: Mantoe Phakathi/IPS

BRUSSELS, Apr 1 2014 (IPS) - As African and European leaders meet in Brussels this week under the theme of “Investing in People, Prosperity and Peace”, it is clear Africa’s greatest natural resource, its children, must be centre stage.

Between 2010 and 2025, the child population of sub-Saharan Africa will rise by 130 million, making it the youngest continent in the world. By 2050, one in every three births and almost one in every three children under 18 will be in Africa.

Yet for this youth dividend to be the driver of Africa’s prosperity, it is critical that all of the continent’s children have the right foundations to be able to participate as well as benefit.

A lot of the focus is now on how business can be a critical driver in the continent’s transformation.  And there is no doubt that new economic investment is yielding results, stimulating growth and new opportunities.

But it is also clear for Africa to ultimately benefit from these economic investments, it still needs a development focused partnership that builds the foundation of a strong, fair and equitable society for its youngest citizens.

In many parts of the African continent, life for millions of children is changing for the good. Along with the new investments in infrastructure, the rapid changes in access to mobile technology and an increase in economic growth, the good news is more children are living beyond their fifth birthday, more children are going to school and more children are better equipped for the challenges of the 21st century. Philippe Cori, director of the United Nations Children’s Fund’s European Union Partnership Office in Brussels, says in many parts of the African continent, life for millions of children is changing for the good. Courtesy: UNICEF

As Europe’s own experience demonstrates, investments in early childhood care, good nutrition, a quality public health system and safety nets to protect the most vulnerable,  are the foundations that lead to stable, inclusive and prosperous societies.

Over the last decades, development assistance from partners like the European Union and its member states has been critical to expanding and improving the quality of basic social services, especially for the poorest and most marginalised children. The success can be measured in concrete results, including a drop in child mortality by 45 percent between 1990 and 2012 and an increase in primary school enrolment among others.

We also know there is much more to be done. At least one in three children under five in Africa are stunted and over half of the world’s out-of-school children live in Africa (33 million).

Preventable disease like pneumonia, malaria and diarrhoea still account for 40 percent of all under five deaths. Hundreds of millions remain without access to safe water and adequate sanitation. Poverty pushes families to migrate, affecting children directly: whether they are left behind, migrating with parents or alone, they are increasingly exposed to vulnerabilities, including child trafficking — its darkest facet.

And we also know that economic growth, trade and business alone cannot translate Africa’s youth dividend into the dynamic asset it could and should be. Investments in human security, strong public institutions and equitable access to basic social services will remain vital to stability and our shared global prosperity.

Europe’s commitment to Africa’s children, especially the poorest, is still needed. Not just because it makes good business sense as it can help make sure there is a financial return on economic investments.

Not just because it will lead to less chances of conflict, insecurity and displacement. Not just because it makes sense for our shared humanity and our shared global future. But ultimately because Europe is and can make a difference by giving every Africa child the opportunity to reach their potential, to determine their own future and write their own story.

Philippe Cori is the director of UNICEF’s EU Partnership Office in Brussels which is managing UNICEF’s relations and partnership with the European Institutions with a view to influence and contribute to EU policies particularly in key areas such as nutrition, health, education, protection, gender, disability, poverty eradication and humanitarian assistance. This partnership aims at mobilising and leveraging quality resources for the realisation of children’s rights everywhere and especially the most disadvantaged.