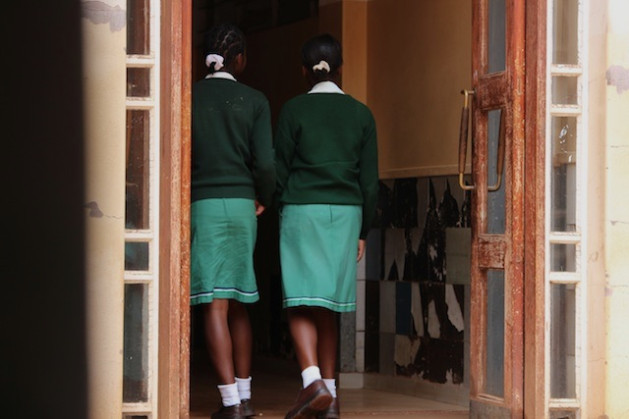 Zimbabwe has seen a significant increase in the number of teen mothers in recent years. Credit: Jeffrey Moyo/IPS

BULAWAYO, Mar 14 2014 (IPS) - She is only 17, but each morning is a reminder of her losses in life. As Pretty Nyathi* forces herself out of bed, feeds her baby, bundles him on her back and rushes to the market to buy vegetables to sell on the streets of Bulawayo, Zimbabwe she wishes her life were different.

“There is nothing fancy about being a teen mother,” she told IPS. “I wish I could reverse the hands of time and go back to school and be like any other girl.”

Five years ago her mother died and Nyathi went to live with her grandmother, who runs a shebeen (informal bar) in Tsholotsho, 116 kms north-east of Bulawayo, Zimbabwe’s second-largest city.

At age 14, she was raped by a shebeen client. “I tried reaching out to my grandmother but she would threaten to throw me out,” she said.

Soon the grandmother forced the girl into prostitution with clients. “I have lost count of the men I slept with and I did not use protection,” said Nyathi.

In 2012 she ran away to Bulawayo, where she lived in the streets and survived through commercial sex. Two months later she found herself pregnant and was told at the clinic that she was HIV positive. A pastor took her to a shelter, and Nyathi started antiretroviral (ARV) treatment at Mpilo hospital.

“By the grace of the Lord, my baby is HIV negative,” said Nyathi.

She lives with a relative but struggles to follow the ARV treatment and have “a balanced diet that would help me live longer and at least see my daughter go to school.”

Nyathi is one example of the trend of rising teen pregnancies in Zimbabwe.

“That is a significant increase,” Stewart Muchapera, communications analyst with the United Nations Population Fund (UNFPA) in Zimbabwe, told IPS.

“Puberty is a time of rapid biological change and this stage of development needs to be well managed for young people to pass through it safely,” said Muchapera.

Among the many causes of teenage pregnancy, he mentions the lack of adequate, accurate information on puberty, which leaves young people dependent on uninformed peer sources or unguided internet searches.

Some cultural or religious norms such as child marriage and social issues like intergenerational sex, sexual coercion and transactional sex also contribute to teenage pregnancy, he said.

The ZDHS reports that nine out of ten sexually active women aged 15 to 19 are in some form of a marriage, and that for two out of three girls who first had sex before age 15, sex was forced against their will.

In addition, the political and economic crisis of the last decade has brought widespread poverty and disruption of health and education services. Girls engage in risky transactional sex as a means to food, clothes, school and security.

Simanga Nkomo, a midwife in Bulawayo, told IPS that every year she assists younger mothers, some aged 14 and even younger.

“The increase is worrisome, as most of these teenagers are uninformed about maternal health and they risk succumbing to maternal mortality,” she said.

Sipho Ncube* is another teen mother from Bulawayo. She had good grades in her last year of high school but quit studying when she fell pregnant and gave birth to a baby boy, now seven months old.

“It started as a fling and one thing led to another until I discovered I was pregnant. I had knowledge of contraceptives but for some reason I did not use any,” she told IPS.

Ncube and her baby are HIV negative.  But it could easily have been otherwise: national seroprevalence is nearly 15 percent among adults aged 15-49.

Ncube’s parents, who work in South Africa, visit three times a year and send a little money. She looks after her siblings, aged 13 and seven, in a two-room rented house in Mpopoma, a high-density suburb. The baby’s father is working in Victoria Falls and helps financially whenever he can.

“I regret everything but I have to live with the silly choices I made,”  Ncube told IPS. “I wish to go back to school and be able to fend for the baby.”