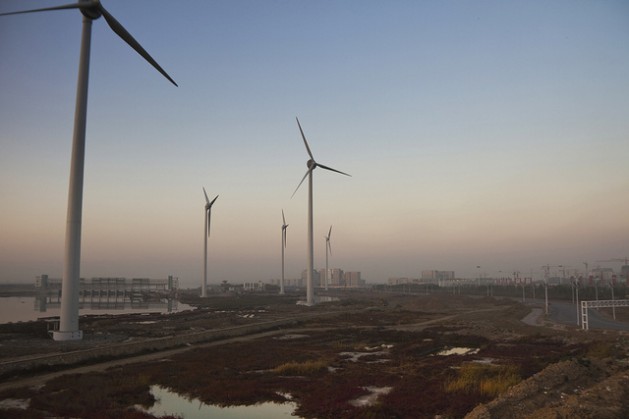 UNITED NATIONS, Apr 7 2014 (IPS) - Policy uncertainty and plummeting solar prices led to a 14-percent decrease in investment in renewable energy in 2013, according to a report released Monday.

Investment fell across the globe, even in high growth regions like China, India and Brazil. But it was severe cuts in Europe – until recently a pace-setter for the rest of the world – that marked the retrenchment.

“In the longer run, the market frameworks will have to change in order to integrate a large fraction of renewables into the grid.” -- Ulf Moslener

In 2013, the continent spent 48 billion dollars less than the year before.

The report, jointly released by the U.N. Environmental Programme (UNEP), the Frankfurt School and Bloomberg New Energy Finance, painted a hopeful picture of an industry recuperating after a period of consolidation, but could only highlight a “trickle of significant” projects of the kind that possibly could supplant – not supplement – traditional power generation on a wide scale and curb carbon emissions.

“Lower costs, a return to profitability on the part of some leading manufacturers, the phenomenon of unsubsidized market uptake in a number of countries, and a warmer attitude to renewables among public market investors, were hopeful signs after several years of painful shake-out in the renewable energy sector,” said Michael Liebrich, chair of the Advisory Board for Bloomberg New Energy Finance, in a statement.

Renewables constituted 43 percent of new power capacity and increased their share of global power generation from 7.8 to 8.5 percent. Still, they have not been able to displace rising coal consumption in the developing world and continue to staunch carbon growth rather than reduce it overall.

Though last year renewables prevented an estimated 1.2 gigatonnes of carbon from being released into the atmosphere, global emissions still grew by 2.1 percent.

“On their own, renewables investment will certainly not grow fast enough to put the world on a two-degree compatibility path,” said Ulf Moslener, head of research at the Frankfurt-School-UNEP Collaborating Centre for Climate & Sustainable Energy Finance, referring to the temperature threshold widely used by scientists.

A rise of more than two degrees centigrade over the year 1900 temperatures would have catastrophic consequences in much of the world.

A study commissioned last year by the Norwegian government predicted “the capital and liquidity requirements of Basel III are likely to limit the amount of capital available for renewable energy financing from banks in the future.”

The Frankfurt report found that venture capitalists and private equity companies cut back considerably in 2013, reducing investments in specialist renewable energy companies to only two billion – their lowest levels since 2005.

But convincing global regulators to make room for the type of leveraged investments and bundled-and-chopped assets that caused the financial crisis will be a tough sell.

“It’s always faster for a government to say ‘we will put in a set price for energy’ than it is to change their financial regulations – which are essentially their entire financial system,” said Eric Usher, chief of the finance unit in UNEP’s Division of Technology, Industry and Economics.

“There’s been an uptick in green bonds and pension funds are starting to engage,” Usher told IPS. “In the U.S. and Canada you have tax-driven structures that group power plants together and sell them to investors. It provides very low cost financing.

“The investors with longer time horizons get interested in mature technologies,” he added.

Those companies that survived an extended period of consolidation and a recovery from over-capacity – primarily in the solar industry – saw their equity prices increase by 54 percent last year, roughly doubling gains in the market at large. But despite frothy returns for portfolio managers and a rash of IPOs, the main tracking index – The WilderHill New Energy Global Innovation Index (NEX) – is still 60 percent below its 2007 peak.

“In the longer run, the market frameworks will have to change in order to integrate a large fraction of renewables into the grid,” Moslener told IPS. “That will also need government attention – I would expect renewables to be only part of the solution.”

Unless significant cuts are achieved in existing emissions, the goal of renewables risks changing from serving as an avant-garde solution to just another corollary low-cost fuel for increased growth. Though most models predict global energy use tapering off by mid-century, without cuts or a rethinking of axiomatic growth, it will be too late by then to head off climate change’s most cataclysmic impacts.

“The financial system we have today is based on a construct that is not helpful to sustainable development,” says Usher. “The reality is a huge challenge – it will take some time to solve. Renewables are not the solution on their own.”