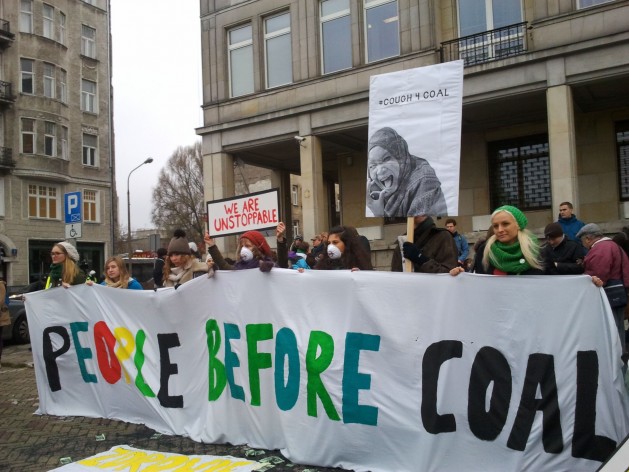 Environmentalists protesting against coal outside the Polish Ministry of Economy. Credit: Claudia Ciobanu/IPS.

WARSAW, Apr 20 2014 (IPS) - A European ‘energy union’ plan proposed by Polish Prime Minister Donald Tusk as an EU response to the crisis in Ukraine could be a Trojan horse for fossil fuels.

On account of Poland’s proximity and deep historical ties to Ukraine, the country’s centre-right government led by Donald Tusk has assumed a prominent position in attempts to ease the crisis in Ukraine. Notoriously, Foreign Minister Radoslaw Sikorski helped negotiate a February deal between then Ukrainian president Viktor Yanukovych and opposition leaders of Euromaidan, the name given to the pro-EU protests in Kiev.

Asking for a prominent role for coal and shale gas is mostly a Polish game.

The Polish government’s assertiveness came with quick electoral gains. According to a poll conducted in early April by polling agency TNS Polska, Tusk’s Civic Platform for the first time in years took a lead in voters’ preferences over the conservative Peace and Justice Party of Jaroslaw Kaczynski.

“Not only is Civic Platform back in the lead, but also more Poles are ready to vote and vote for the government,” Lukasz Lipinski, an analyst at think tank Polityka Insight in Warsaw, told IPS. “All opposition parties now want to move the debate [ahead of the May 25 European elections] to domestic issues because on those it is much easier to criticise the Civic Platform after six years of government.”

Yet Tusk’s executive insists on Ukraine because of the benefits the topic can still bring. In the last weekend of March, the prime minister announced a Polish proposal for a European energy union that would make Europe resilient to crises like the Russian-Ukrainian conflict.

“The experience of the last few weeks [Russia’s invasion of Ukraine] shows that Europe must strive towards solidarity when it comes to energy,” said Tusk speaking in Tychy, a city in the southern coal-producing Silesia region.

He went on to outline the six dimensions of the ‘energy union’: the creation of an effective gas solidarity mechanism in case of supply crises; financing from the European Union’s funds for infrastructure ensuring energy solidarity in particular in the east of the EU; collective energy purchasing; rehabilitation of coal as a source of energy; shale gas extraction; and radical diversification of gas supply to the EU.

“It is very disappointing to note the total absence of energy efficiency measures from this vision, even though it featured centrally in the March European Council on Crimea conclusions,” Julia Michalak, EU climate policy officer at the NGO coalition Climate Action Network (CAN) Europe, told IPS. “If the Crimea crisis did not make the government realise that energy efficiency is the easiest and cheapest way to achieve real energy security for Europe, I’m not sure what would.”

While some of the measures proposed by Tusk would indeed lead (assuming they could be implemented) to increased European solidarity in the energy sector, asking for a prominent role for coal and shale gas is mostly a Polish game.

At the moment, the EU has no common binding EU policies on shale gas – various EU countries such as France and Bulgaria even have moratoriums on exploration. And the EU’s long-term climate objectives, primarily the 2050 decarbonisation goal, make a true coal resurrection unlikely.

According to Michalak, the coal and shale gas elements of the Polish six-point plan must be understood, on the one hand, as aimed at domestic audiences who want to see their government play hard ball and, on the other, as a negotiating tool meant to draw some specific gains out of Brussels.

The Tusk government has made herculean efforts to persuade foreign companies interested in shale gas to stick to the country, including firing environment minister Marcin Korolec during the climate change talks COP19 last year for reportedly not being shale gas friendly enough. Nevertheless, in April this year, France’s TOTAL became the fourth company to announce dropping exploratory works in Poland, as shale gas here is proving more scarce than initially thought.

The Polish national consensus on coal too is starting to show minor cracks.

Nearly 90 percent of electricity used in Poland comes from coal, and the government’s long-term energy strategy envisages a core role for coal up to 2060. Tusk’s executive has been unsuccessfully trying to torpedo the EU’s adoption of decarbonisation targets, so at the moment it is unclear how authorities will reconcile EU commitments with a coal-dependent economy.

Last year, the chief executive of state energy company PGE resigned, arguing that an expansion by 1,800 MW of Opole coal plant in south-western Poland is unprofitable. The government chose to go ahead with expansion plans anyway.

Despite the generalised perception in Poland that coal is a cheap form of energy, this month saw leading newspapers (including the conservative Rzeczpospolita) discussing externalities of coal following a study by think tank Warsaw Institute for Economic Studies showing that, between 1990-2012, Polish subsidies for coal amounted to 170 bn PLN (40 billion euros).

In 2013, a series of international financial institutions, including the World Bank and the European Investment Bank, announced significant restrictions to their financing of coal – lending to Polish coal, for instance, would be impossible for these institutions under the new guidelines.

Poland also has to implement the EU’s Industrial Emissions Directive which calls for stricter pollution standards at energy producing units as of 2016 or closure of plants which do not comply. And it is potentially in this space that some of the benefits of Poland’s tough game on coal in Brussels could be seen.

In February, the European Commission allowed Poland to exempt 73 of its energy producing units from the requirements of the Directive, including two outdated units at Belchatow coal plant in central Poland, Europe’s largest thermal coal plant (5,298 MW) and biggest CO2 emitter.

Additionally, it has emerged this month that Poland intends to use regional funds meant for tackling urban air pollution from the next EU budget (2014-2020) to finance modernisation measures at the country’s biggest coal and gas producers, both private and state-owned.