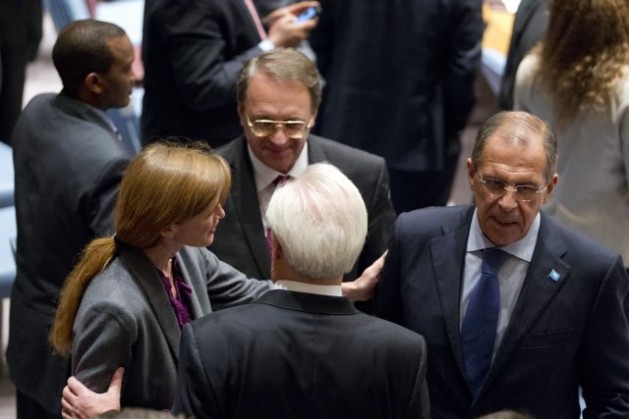 UNITED NATIONS, Apr 22 2014 (IPS) - The growing tension between the United States and Russia over Ukraine has threatened to unravel one of the primary peace initiatives of the United Nations: nuclear disarmament.

As they trade charges against each other, the world’s two major nuclear powers have intensified their bickering – specifically on the eve of a key Preparatory Committee (PrepCoM) meeting on a treaty to stop the proliferation of these weapons of mass destruction (WMD).

"The spectre of war in Europe may give new impetus to efforts to ban the bomb." -- Alice Slater

The “Thirteen Steps” agreed upon at a review conference of the Nuclear Non-Proliferation Treaty (NPT) in 2000 and the 64-point Action Programme, together with the agreement on the Middle East WMD Free Zone proposal at the 2010 Conference, had augured well for the strengthened review process, former U.N. Under-Secretary-General for Disarmament Affairs Jayantha Dhanapala told IPS.

But he warned that, “However the actual achievements, the return to Cold War mindsets by the U.S. and Russia and the negative record of all the nuclear weapon states have converted the goal of a nuclear weapon free world into a mirage.

“Unless the Third Prepcom reverses these ominous trends, the 2015 Conference is doomed to fail, imperiling the future of the NPT,” warned Dhanapala, who is also president of the Pugwash Conferences on Science and World Affairs.

The Third PrepCom for the upcoming 2015 Review Conference of the NPT is scheduled to take place at the United Nations Apr. 28 through May 9.

But a positive outcome will depend largely on the United States and Russia, along with the other declared nuclear powers, Britain, France and China, who are also the five permanent members (P5) of the Security Council.

Ray Acheson, director of Reaching Critical Will, a programme of the Women’s International League for Peace and Freedom (WILPF), told IPS next week’s PrepCom is being held at a time of high tensions between the two countries with the largest stockpiles of nuclear weapons.

The United Nations describes the 1970 NPT as "a landmark international treaty whose objective is to prevent the spread of nuclear weapons and weapons technology, to promote cooperation in the peaceful uses of nuclear energy and to further the goal of achieving nuclear disarmament and general and complete disarmament".

The treaty represents the only binding commitment in a multilateral treaty to the goal of disarmament by the nuclear-weapon states.

As of now, there are 190 parties to the treaty, including the five nuclear-weapon states, namely the United States, Britain, France, China and Russia.

But the other nuclear weapons states - India, Israel and Pakistan - have refused to join the NPT. North Korea joined and withdrew in 2003.

She said neither of these countries has fulfilled their obligation to negotiate the elimination of these weapons and in fact, both spend billions of dollars upgrading them and extending their lives into the indefinite future.

“Nuclear weapons are inherently dangerous and the risk of their use by accident or on purpose warrants urgent action on disarmament,” Acheson added.

During 2014, she pointed out, the NPT nuclear-armed states must report on their concrete activities to fulfill the disarmament-related actions of the 2010 NPT Action Plan.

The extent to which the nuclear-armed states can report the achievement of meaningful progress in implementing their commitments will be a strong indicator of their intention to serve as willing leaders and partners in this process, she noted.

But “none of the public releases issued thus far by the nuclear-armed states has given any reason to expect they have given serious consideration to the implementation of most of those commitments.”

Alice Slater, New York director of the Nuclear Age Peace Foundation, told IPS there is “alarming sabre rattling on the eve of the NPT PrepCom.”

“Yet there’s little reporting on Russia’s security fears as NATO expands up to its borders, inviting even Ukraine and Georgia to join,” said Slater, who also serves on the Coordinating Committee of Abolition 2000.

This, she said, despite President Ronald Reagan and President George Bush’s promises to Soviet leader Mikhail Gorbachev, after the fall of the Berlin Wall, that NATO would not expand beyond East Germany.

Nor is it reported how the U.S., in 2001, quit the 1972 Anti-Ballistic Treaty, planting missiles in Poland, Romania and Turkey, she added.

In his closing statement as president of the historic 1995 NPT Review and Extension Conference, which extended the treaty for an indefinite duration, Dhanapala said, “The permanence of the Treaty does not represent a permanence of unbalanced obligations, nor does it represent the permanence of nuclear apartheid between nuclear haves and have-nots.

“What it does represent is our collective dedication to the permanence of an international legal barrier against nuclear proliferation so that we can forge ahead in our tasks towards a nuclear weapons-free world.”

Slater told IPS that deteriorating U.S.-Russian relations bodes poorly for progress at the paralysed NPT process, which even before this latest eruption of enmity failed to implement the many promises for nuclear disarmament since 1970.

With 16,000 nuclear bombs in Russia and the U.S., non-nuclear weapons states must step up their efforts for a ban treaty, she added.

The P-5 nuclear powers boycotted these meetings in Oslo (in 2013) and Mexico (February 2014) while Indian and Pakistan joined 127 nations in Oslo and 144 in Mexico. This year, Austria will host a follow-up.

They ostensibly support nuclear disarmament and deplore the catastrophic consequences of nuclear war in this burgeoning new global conversation about its humanitarian effects, while continuing to rely on lethal nuclear deterrence, she noted.

Article VI of the NPT requires all treaty parties to be responsible for its fulfillment.

“The spectre of war in Europe may give new impetus to efforts to ban the bomb,” warned Slater.

Acheson told IPS that unlike the other weapons of mass destruction – chemical and biological weapons – nuclear weapons are not yet subject to an explicit legal prohibition.

“Now is the time to address this anomaly, which has been allowed to persist for far too long. History shows that legal prohibitions of weapon systems, their possession as well as their use, facilitate their elimination.”

She said weapons that have been outlawed increasingly become seen as illegitimate.

They lose their political status and, along with it, the money and resources for their production, modernisation, proliferation, and perpetuation.