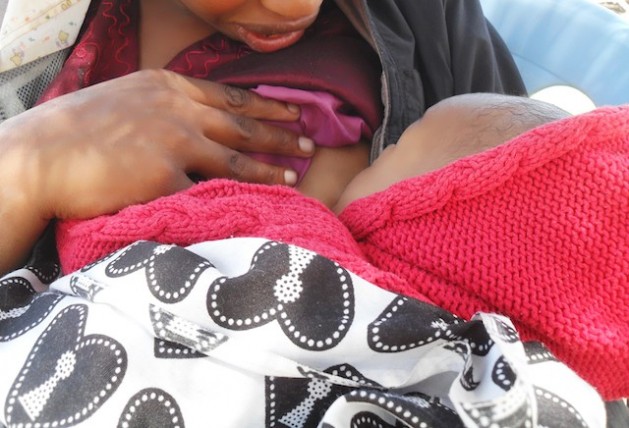 With Option B+, pregnant women are started on lifelong antiretroviral therapy regardless of their CD4 count. Credit: Miriam Gathigah/IPS

NAIROBI, May 26 2014 (IPS) - Kenya’s health sector has been facing significant challenges, ranging from a shortage of health care providers to a series of labour strikes. The problems have not only disrupted health services, but have HIV experts divided on whether to roll out Option B+ nationwide or just to pilot it in high volume facilities such as major referral hospitals.

Option B+ is the latest treatment option recommended by the World Health Organisation for HIV positive mothers.

In the earlier Options A and B, mother and baby were given antiretrovirals (ARVs) during pregnancy and breastfeeding; only women with CD4 counts under 350 were prescribed ARVs for life. CD4s, or helper cells, fight infections in the body.

Option B+ consists of lifelong provision of ARV therapy to pregnant women, regardless of their CD4 count.

Dr John Ong’ech, assistant director at Kenyatta National Hospital, told IPS that when discussion begun in 2013 on whether to start option B+ in Kenya, “at the national policy level, people were divided on whether to roll out Option B+ fully.”

Currently, Option B+ is only available in the two major referral hospitals, Kenyatta National Hospital (KNH) in Nairobi province, the Moi Referral Hospital in the Rift Valley province, and in a few mission and district hospitals.

“There are those who felt that we need to first fix systems in the health sector,” said Ong’ech.

“To begin patients on Option B+, you need clinicians because there are things to be considered, such as drug toxicity, at the treatment entry point, after which nurses can manage,” he added.

In 2013, nearly 20,000 HIV positive pregnant women were given Option B+ lifelong ARV therapy.  Another 55,860 should be enrolled to achieve 100 percent coverage, according to the Joint United Nations Programme on HIV/AIDS (UNAIDS).

Maurice Okoth, a clinician at a prevention of mother-to-child transmission (PMTCT) centre in Nyanza province, told IPS that Option B+ is not just a matter of ensuring drug availability.

“Clinic records must be organised, they must show if patients are defaulting and how these defaulters can be tracked. This is nearly impossible at the moment due to understaffing. We are facing a human resource crisis in the health sector,” he said

Kenya has some 36,000 nurses in the public and private sector but needs at least 80,000 more, according to government statistics.

Ong’ech agrees: “If you have adherence problems among the HIV patients that you are already treating, there is no need to roll out Option B+ because it will only get worse.”

The Director of Medical Services, Dr Simon Mueke, acknowledges that the disruption of health services due to labour unrest has affected PMTCT services.

In December 2011, doctors went on strike demanding more money for the health sector. In March 2012, nurses staged a two-week long strike, and five months later doctors stopped working for nearly three weeks. More strikes took place in 2013. A strike by doctors and nurses is looming in 2014 if government does not hire more staff.

Not surprisingly, PMTCT coverage fell by 20 percent in 2011 and 2012, according to UNAIDS.

The price tag and the logistics of rolling out Option B+ nationwide are additional challenges.

Onge’ch says that, while ARVs are generally available across Kenya, “the country needs to come up with a cost effective way of procuring the additional drugs for Option B+.”

In ARV treatment, the actual cost of drugs represents less than 30 percent of the total. The new single-pill, fixed-dose regime costs about 180 dollars per patient per year, according to the Ministry of Health, and is expected to cost even less in the future.

“It is health care systems and the actual delivery of the services that take the remaining 70 to 80 percent,” said Okoth. “You need more laboratory services and viral load testing to ensure that they [women] are adhering to the treatment.”

Distance from home to the clinic is a problem. In Kisumu, Nyanza province, the average distance to the health facility is about 5.8 km while in Mandera, North Eastern Province, it is 20 kms, explained Okoth.

But Maya Harper, country director for UNAIDS Kenya, told IPS that Option B+ is a cost effective measure: “In the long run, it reduces the burden on the health system and on poor women. Placing women on and off treatment when they are pregnant is much more expensive.”
Beyond health infrastructure problems, Dr. Dave Muthama, from the Elizabeth Glaser Paediatric AIDS Foundation, says that stigma ”remains one of the major obstacles.“

At KNH, Ong’ech daily sees how stigma affects patients: some get the ARVs but do not take them while others refuse to collect the drugs for fear of being found out.

Poverty is another barrier, said Muthama: “Mothers do not adhere to the PMTCT visits because (…) while at the clinic, they are missing out on economically gainful activities.”

“The society needs to go through the same four stages that most people who test positive for HIV go through: denial, anger, acceptance and coping,” he said.