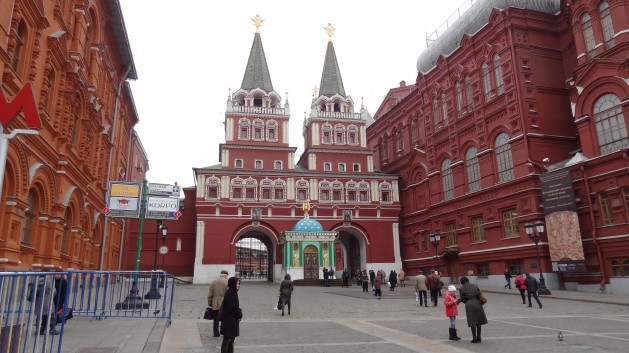 Muscovites at the entrance to Red Square. Many of Russia’s growing middle class and young people have been dismayed by the recent military invasion of Crimea and President Vladimir Putin’s aggressive policy on Ukraine. Credit: Pavol Stracansky/IPS

MOSCOW, May 13 2014 (IPS) - As Russia faces harsh sanctions and growing international isolation over its annexation of Crimea and support of separatists in eastern Ukraine, economists and sociologists are warning that the Kremlin’s international policies may fuel a potentially devastating brain drain.

Many of Russia’s growing middle class and young people, especially in the country’s major cities, have been dismayed by the recent military invasion of Crimea and President Vladimir Putin’s aggressive policy on Ukraine.

And they fear that recently-imposed Western sanctions, though not yet having a major effect on normal life in Russia, could in time wreak havoc on an economy which is already on the verge of recession, threatening their careers and job prospects.

This has already led some to contemplate leaving.

“The ideological climate needs to be changed so that people who have left feel comfortable returning to Russia.” -- Andrei Kortunov, head of the Russian International Affairs Council

Roman Kramskoy, a doctor in Novorossiysk in southern Russia, told IPS that he would soon be moving to Germany for a new job as he wanted to “leave for the West for more peaceful circumstances”.

“I wouldn’t say the decision is directly connected with the recent political situation and sanctions against Russia, but it was the final straw which made me take this move.”

He is far from the only one. Local media has reported that some firms, which help relocate Russians abroad, have seen a dramatic rise in enquiries about leaving the country during the first quarter of this year.

Meanwhile, businessmen with internationally trading companies have spoken in the local media about their fears that the economic sanctions imposed by the West will damage their businesses. Those who have their own ventures and assets abroad have said it is now easier for them to relocate abroad to continue their operations than to stay in Russia and risk losing partnerships.

On internet forums, emigration is a major topic of discussion, especially among young people.

Zhenyia Morozova, an 18-year-old student in Moscow, told IPS that she had been considering studying art in London when she was older. But, she said, the imposition of sanctions had prompted her to speed up her preparations to leave.

“The news of these sanctions has worried me and I have started to gather all the information I need about studying in London and have spoken to my parents about money to finance it. I don’t want my dream of studying in London destroyed because of sanctions,” she said. 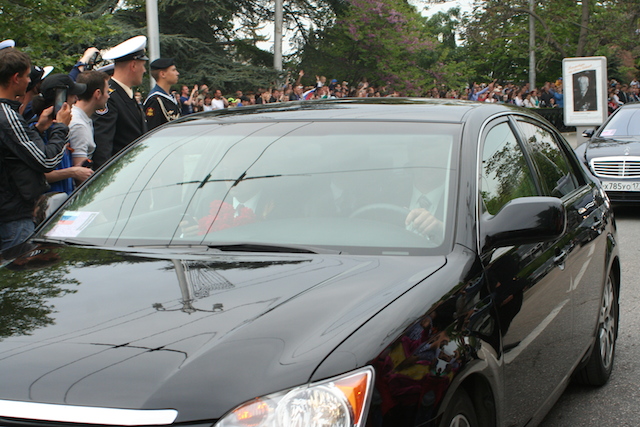 People line the streets in Sevastopol, Crimea, to capture a glimpse of Russian President Vladimir Putin in his cavalcade as he arrives to celebrate Victory Day. But experts warn that the annexation of Crimea and subsequent Western sanctions could be prompting a brain drain from Russia. Credit: Alexey Yakushechkin/IPS

Any brain drain would be a major problem for Russia. It is already struggling with a shrinking and ageing population – according to United Nations estimates, Russia’s population is set to decline by up to 40 percent between now and 2050. But the effects on its economy could be devastating as it is the brightest and most creative – those with the greatest potential to generate wealth and economic growth – who appear most willing to leave.

According to a 2013 poll by independent polling organisation, Levada, almost a quarter of Russians had considered moving abroad. But the figure was higher among young Russians. Of those who had or were definitely emigrating, almost half were between the ages of 20 and 35.

Professor Andrey Korotayev, an expert on socio-politics at the Russian State University for Humanities in Moscow, told IPS: “For the development of any modern economy, transfer of high-skilled labour is essential.

“What Russia needs is for people in high-skilled sectors of the economy and business to go to the West, gain skills and experience in major corporations etc. and then return, transferring their knowledge and experience and benefiting the Russian economy.”

But in the wake of the Crimea annexation, experts say that some of those planning to leave will now be doing so for good and some of those who have already left will reconsider their plans to return.

Andrei Kortunov, head of the Russian International Affairs Council (RIAC) in Moscow, told IPS: “It is certainly the case that there are those who are going to leave because of recent events, but there will also be those who have left who will decide not to come back because they are concerned about the political climate in Russia.”

The Kremlin is aware of the potential problems Russia could face from a brain drain and local politicians, including Prime Minister Dmitri Medvedev, have spoken of the need to implement reforms and take measures to ensure students and talented professionals stay in the country.

But experts say that, regardless of what happens with Russian involvement in Ukraine, there will have to be a major change in the political and social climate in Russia to either lure those that have left the country back or prevent people from leaving in the first place.

As well as a belligerent foreign policy, Putin has overseen a crackdown on rights since his return to the presidency in 2012 and this has intensified dramatically since the start of the Euromaidan protests and subsequent regime change in neighbouring Ukraine.

The last two months has seen a raft of laws proposed which would severely restrict freedoms of assembly and expression, including a ban on the dissemination of any negative information about the government and Russia’s military as well as the introduction of lengthy jail sentences for minor offences related to unauthorised protests.

The Kremlin has also recently moved to have the websites of independent news outlets and political opposition groups blocked and bring the internet under its control with a set of draconian laws on web use. These came just days after the head of Russia‘s biggest social network, Pavel Durov, left the country after a clash with the state security services over handing over internet users’ data.

Experts say that issues like this need to be addressed to ensure that emigrants will want to return to Russia.

“The ideological climate needs to be changed so that people who have left feel comfortable returning to Russia,” Kortunov said.