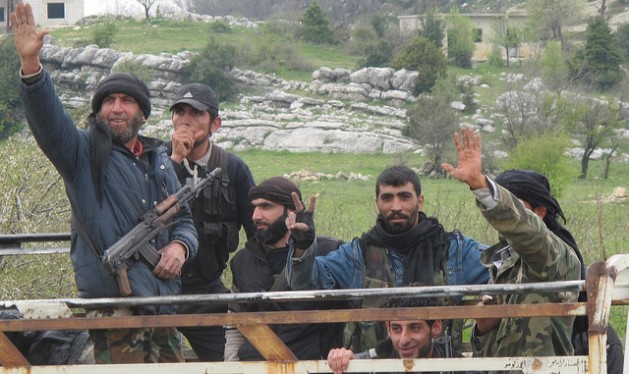 Syrian anti-regime fighters in the mountains of the Latakia region. Credit Shelly Kittleson/IPS

JABAL AL-AKRAD (SYRIA), May 20 2014 (IPS) - In the mountains east of the coastal port of government-held Latakia, three years of regime bombardment has left swaths of blackened stumps in the mountain forests and crumbling concrete structures in Sunni villages, most of whose inhabitants support opposition forces.

Efforts by an alliance between moderate rebel groups and Islamists essentially cleared the area of the extremist Islamic State of Iraq and Al-Sham (ISIS) in an operation launched in early January. ISIS, a brutal Al-Qaeda splinter group disavowed by the global jihadist conglomeration’s leader, still holds extensive territory in the eastern part of the country.

Many forced to flee the country told IPS that they would support a truce if it might stop the killing.
Several thousand inhabitants from the mountainous area near the Syrian coast have left for Turkey or other regions. Many have fled here from areas under government siege – the United Nations estimates that some 250,000 people across the country are trapped in besieged areas – or ones subject to more unrelenting regime air strikes. Others are Sunnis fleeing persecution from the nearby Alawite stronghold of Latakia.

Ideological tendencies vary among the remaining fighting groups, some of which voice views barely distinguishable from those of ISIS. No precise figures exist for specific groups, but nationwide, the Islamic Front – which rejects secularism and a civil state – is thought to have over 40,000 men and Al-Qaeda-affiliate Jabhat Al-Nusra reportedly has some 6,000.

On the road to the highest peak in Jabal Al-Akrad, a building with armed fighters patrolling its balcony was pointed out to IPS as housing Moroccans from the jihadist Sham al-Islam, a small Islamist group established in August 2013 in the coastal area by a former Guantanamo detainee. The IPS correspondent was told that the North African jihadists are “just staying there, not doing anything at the moment.’’

Some heavily armed fighters from the Al-Qaeda affiliate Jabhat Al-Nusra are also present in the area.

The Farouq Brigades, which claims to directly control at least half of the roughly 50 villages in Jabal Al-Akrad and have 17,000 men nationwide, espouses a non-ideological stance and is one of the major rebel factions that continue to counter ISIS in other areas of the country.

It has lost men in clashes against Jabhat Al-Nusra in the past as well, but for the time being seems to coexist warily alongside it on this front for the purposes of fighting regime forces. The group’s leader, a former lawyer from Homs known as Abu Sayeh, stressed to IPS that the group was fighting solely for Syrians’ right to choose.

Farouq was created in 2011 in the flashpoint area of Homs, the country’s third largest city and ‘cradle of the revolution’. Some 140 kilometres northeast of Damascus, Homs is also known as the ‘Stalingrad of the 21st century’ due to the massive destruction and devastating siege suffered at regime hands.

Relatively well-organised with a large number of defected officers, Farouq has lost ground over the years to the better-funded extremist factions. Its role in the recent months’ anti-ISIS campaign alongside the other largest group voicing a strictly non-religiously-affiliated agenda, the Syrian Revolutionaries Front (SRF), has enabled it to regain some ground. SRF, based in the Idlib region east of the Jabal Al-Akrad mountains, claims to have 18,000 fighters on call across the country.

Farouq’s leader told IPS that it relies exclusively on individual donations and weaponry and ammunition won in battle, unlike the regular support from Saudi Arabia that the SRF is said to receive.

Commanders are adamant that their fight is entirely non-sectarian and say Christian inhabitants of the area continue to be helped by the community. On the issue of Alawite hostages from villages in the mountains temporarily taken by rebel fighters and then lost again in the late summer of 2013, one local commander said they were being treated well.

A request by IPS to meet with the hostages was denied out of concern that “regime troops would target the location if they knew where it was and then say that we killed them.’’

IPS was told that ‘’even an Alawite sheikh’’ was among the hostages but that the regime had thus far refused to countenance an exchange, in marked contrast to those like the early 2013 exchange of over 2,000 rebel prisoners for 48 Iranians.

Many forced to flee the country told IPS that they would support a truce if it might stop the killing. The Assad regime continues to reject the idea and insists on calling all those in rebel areas “terrorists’’, subjecting vast areas to mass starvation and relentless bombing, and is continuing reportedly continuing chemical attacks with ammonia and chlorine. It also claims to be winning the war – albeit with ever more substantial support from Iraqi Shia militias, the Lebanese Hezbollah movement and Iran.

The regime has called presidential elections on June 3, but a law requiring a registration card newly issued by the authorities makes voting virtually impossible for those in rebel-held areas and for the over nine million displaced out of a pre-war population of 22.4 million. Many residents of starved and besieged areas who have agreed to raise the Syrian regime flag in exchange for an alleviation of their circumstances have since been imprisoned.

Abu Jihad, a former regime officer who defected to return to his home territory in the mountains overlooking the Alawite homeland after ‘’seeing too much regime killing’’, told IPS that neither he nor his men would consider anything less than total victory.

As another bomb struck in the distance, he added that ‘’it just takes time.”