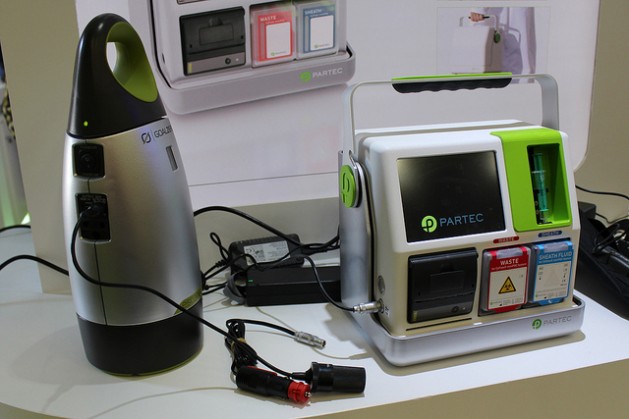 NAIROBI, May 19 2014 (IPS) - As Africa scales up lifesaving antiretroviral therapy for HIV positive people, concerns are rife that the absence of mass routine viral load testing will hamper extending treatment to the millions who need it.

Viral load testing, the gold standard in antiretroviral therapy (ART) monitoring, measures HIV levels in the blood, an indicator of the drugs’ success.

But a viral load test, although routine in wealthy countries, is scarce and expensive in Africa.

“A viral load test in Kenya is 25 dollars at the National Programme on AIDS, while a similar test in a clinic in Asia costs about 11 dollars,” says Roberts. An MSF study on world prices of viral load testing found “a dramatic gap” between the manufacturing cost and the market price African countries pay.

Point of care viral load testing remains largely unavailable in Africa, says the study. Instead, collected blood samples are sent for testing at a central laboratory.

Point of care testing is essential to decentralise care in remote rural Africa, bringing diagnostics closer to the patient and speeding clinical decisions. Though point of care tests are twice as expensive as tests in central laboratories, MSF recommends a mix-and-match combination of solutions that work in a big urban context or in a poor rural district.

HIV experts worry that many women on ARV treatment have never had a viral load test, or it came too late.

“We may have highly infectious mothers on ARVs because they have acquired resistance but are not picked up for lack of proper monitoring,“ says Roberts.

Dr. Dave Muthama, from the Elizabeth Glaser Paediatric AIDS Foundation, tells IPS that “CD4 count does not drop immediately when drugs fail; the CD4 count may remain high for a while and by the time treatment failure is detected, a lot of harm will have been done.” HIV experts are calling on African governments to overcome these challenges.

“While Asia manufactures its own machines and reagents, Africa imports everything,” says Dr. John Ong’ech, assistant director at Kenyatta National Hospital. “We need to explore the option of having locally manufactured viral load testing reagents and machines.”

He warns that the cost of viral load machines could be even higher in Kenya due to the value added tax on imports.

Locally manufactured products will also encounter pitfalls in the form of royalty payments for intellectual property which, according to MSF, can account for up to 65 percent of the manufacturing cost of the tests.

An MSF study on viral load testing in seven African countries assessed options to reduce costs and improve access, such as pooled testing at district level in Malawi and Zimbabwe.

In pooled testing, blood samples from five people are mixed together and only one test is conducted on all five. If it shows a high viral load, individual testing follows.

In Malawi, sample pooling using dried-blood spots collected through easy finger-pricking reduced by 30 percent the number of tests required in a rural district with over 30,000 patients on treatment, saving 207,000 dollars per year.

Roberts stresses the need to push the biggest buyers – the United States President’s Emergency Plan for AIDS Relief (PEPFAR) and the Global Fund to Fight HIV/AIDS, Tuberculosis and Malaria purchase nine out of 10 tests – to adopt pooled procurement and get even cheaper prices for all.

But Ong’ech says this may be difficult, because procurement laws differ across countries and even within countries.

In a generic open platform, the elements for viral load testing are sourced from different manufacturers, while in a closed platform, from a single manufacturer.

Pushing for transparency with prices among and within countries will help. Roberts tells IPS that in Kenya the same component can cost 24 or 11 dollars depending on who imports it.

Test costs also hinge on the efficient use of viral load machines. According to MSF, the closer to maximal capacity the machine is used, the price per test decreases between 25 and 50 percent.

“The drugs could be failing due to social issues such as stigma and that can be dealt with without changing treatment regime,” Mbori-Ngacha explains.

The MSF study found that in Shiselweni, Swaziland, half of people diagnosed with high viral load improved with adherence counselling and their viral load dropped.

“Mass routine viral load testing is not feasible today due to its cost and complexity,” concludes Roberts.”Complexity has reduced greatly and will reduce more. We must develop strategies to reduce costs.”