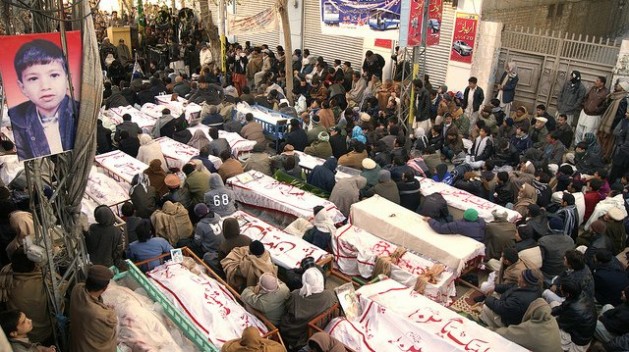 KARACHI, Jun 30 2014 (IPS) - It has been two years since he survived an attack on his life, but 24-year-old Quwat Haider, a member of Pakistan’s minority Hazara community, still finds it hard to narrate the events that scarred him for life.

“I wouldn’t even want my worst enemies to witness what I did on that summer day of Jun. 18, 2012,” the young man, hailing from the southwest Balochistan province, tells IPS.

Like any regular day, he, his sister and their three cousins boarded a bus at 7:45 am bound for the Balochistan University of Information Technology and Management Sciences (BUITMS) in the capital, Quetta.

“There is no travel route, no shopping trip, no school run, no work commute that is safe for the Hazara." -- Brad Adams, Asia director at Human Rights Watch
Just before they disembarked, a car filled with explosives rammed into the bus.

“All I remember is hitting my head hard on the floor of the bus before I passed out. When I came round, I heard screaming all around me. People were getting out of the bus, as they feared it might explode. I got out too, still numb,” Haider recalled with difficulty.

Miraculously, he sustained no serious injuries, and was able to rush his sisters and cousins to the hospital.

Others were not so lucky. Of the roughly 70 Hazara students on the bus that morning, four died on the spot, while dozens of others were seriously wounded in the blast.

It was not the first time a group of Hazaras had been attacked simply for their ethnicity, and experts fear it will not be the last.

A report released Monday by Human Rights Watch, entitled ‘We Are the Walking Dead: Killings of Shi’a Hazaras in Balochistan, Pakistan’, documents systematic attacks on the community between 2010 and early 2014.

It has recorded at least 450 killings of the Shiite minority in 2012, and 400 in 2013. In 2012 approximately one-quarter of the victims, and in 2013, nearly half of all victims, belonged to the Hazara community in Balochistan.

With their distinctive Mongolian features, Hazaras are a Persian-speaking people who originally migrated from central Afghanistan over a century ago. Today there are an estimated 300,000 to 400,000 Hazaras in the country, the vast majority of who reside in Quetta.

The systematic targeting of Hazaras began around 2008, and each account is increasingly chilling – pilgrims en route to Iran are dragged from buses and executed on the roadside, families perish in bomb blasts at busy marketplaces or during religious processions, others are attacked while commuting to work and school, and some are simply slaughtered while praying in mosques. 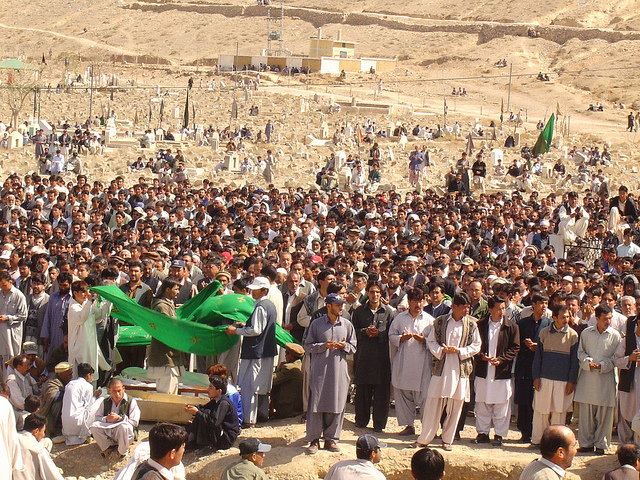 A funeral for victims of gunmen in the Hazara graveyard in Quetta, capital of Pakistan’s Balochistan province. Credit: Altaf Safdari/IPS

Lashkar-e-Jhangvi (LeJ), a banned Sunni militant outfit that reportedly enjoys strong ties with the Al Qaeda and the outlawed Tehreek-e-Taliban Pakistan (TTP), has proudly claimed responsibility for most of the attacks, declaring itself a sworn enemy of the Shi’a “infidels”.

In 2011, a letter circulated in Mariabad, a Hazara-dominated inner suburb in eastern Quetta, read: “Pakistan means land of the pure, and the Shi’as have no right to be here…Our mission [in Pakistan] is the abolition of this impure sect and people, the Shias and the Shia-Hazaras, from every city, every village, every nook and corner of Pakistan.”

In keeping with this deadly vow, the group has carried out endless bloody attacks, including two bombings in January and February last year that killed at least 180 people.

The first incident, on Jan. 10 – which consisted of two subsequent bomb blasts – wiped out 96 people at a snooker club, injuring an additional 150.

This led to countrywide sit-ins in solidarity with the families in Quetta who refused to bury the dead. Three days later the government was forced to suspend the provincial government and impose federal rule in Balochistan.

Earlier this month, on Jun. 8, 30 Shias returning from a pilgrimage were killed in a coordinated suicide bombing in Taftan, a remote part of Balochistan province on the border with Iran.

Because it was “impossible to secure the 800 km-road from Quetta to Taftan,” according to Interior Minister Chaudhry Nisar Ali Khan, the government imposed a blanket ban on road travel to Iran, urging pilgrims to “travel by air instead.”

The problem can only be solved, she said, by taking action against sectarian terrorists in Balochistan and elsewhere, "not restricting movement of those under threat."

Barely five weeks after the massacre, on Feb. 17, a car bomb went off in a crowded vegetable market in Quetta’s Hazara Town, this time killing 84 and injuring about 160 people.

Haider, who lives close to the site of the Jan. 10 attack, counts himself lucky to have survived.

“When I heard the blast, I decided to go and help the wounded, but my mother called just then asking to be picked up from somewhere, so I left home. Otherwise, I would have been dead too,” he added, referring to the scores of people who lost their lives in the second blast, while tending to the injured.

Haider later went to look for his cousins among the carnage. “I saw corpses, headless bodies, singed limbs and hands… it was horrible,” he said.

Rights advocates say that the government’s response to every killing is the same: officials make all the right statements, but fail to conduct any arrests or hold the perpetrators accountable.

Zohra Yusuf, chairperson of the independent Human Rights Commission of Pakistan (HRCP) who participated in a fact-finding mission to Quetta in May 2012, is disappointed with the government’s lacklustre efforts.

“We…brought up the issue with the then governor and chief secretary [of the state] and both acknowledged the persecution; but they had no answers as to why action was not taken against LeJ, which in almost all cases owns up to the attacks,” she told IPS.

Meanwhile, the situation for Hazaras is getting worse.

According to Brad Adams, Asia director at Human Rights Watch, “There is no travel route, no shopping trip, no school run, no work commute that is safe for the Hazara. The government’s failure to put an end to these attacks is as shocking as it is unacceptable.”

The HRCP estimates that 30,000 Hazaras have fled Pakistan in the last five years, resulting in a booming trafficking market in Quetta. Thousands of desperate Hazaras have paid agents huge sums of money to facilitate passage to Australia and Europe, using dangerous sea-routes that offer no guarantee of making it to the other side alive.

Once a serene and peaceful city, Quetta is now pockmarked with army cantonments and military checkpoints. Over 1,000 soldiers from the Balochistan Frontier Corps (a paramilitary force), organised into 27 platoons, patrol the streets alongside the police.

This degree of security makes the continued persecution of the Hazara community even more “appalling”, according to Ambreeen Agha, a research assistant with New Delhi’s Institute for Conflict Management, since it is happening “right under the nose of the Pakistani army.”

For those like Haider, “home” has now become a violent and dangerous place. “No part of Pakistan is safe for me,” he said pessimistically. But unlike his brother, who left the country four years ago, he has no plans of fleeing. “It’s just me and my sister here; if I leave, who will take care of our parents?”