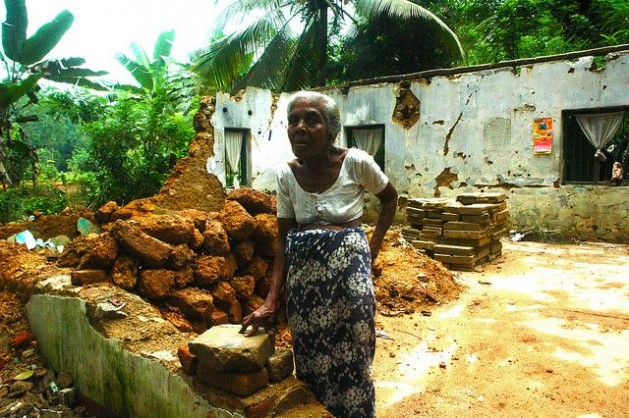 An old woman stands in front of her house, which was destroyed by flash floods in Sri Lanka. Credit: Amantha Perera/IPS

BANGKOK, Jun 25 2014 (IPS) - A consortium of faith-based organisations (FBOs) made a declaration at a side event Wednesday at the 6th Asian Ministerial Conference On Disaster Risk Reduction (AMCDRR), to let the United Nations know that they stand ready to commit themselves to building resilient communities across Asia in the aftermath of natural disasters.

Hosted this year by the Thai government, the conference is an annual collaboration with the United Nations Office for Disaster Risk Reduction (UNISDR), with the aim of bringing regional stakeholders together to discuss the specific challenges facing Asia in an era of rapid climate change.

“I have seen the aftermath of disasters, where religious leaders and volunteers from Hindu temples, Islamic organisations and Sikh temples work together like born brothers." -- Dr. Anil Kumar Gupta, head of the division of policy planning at the National Institute of Disaster Management in India
A report prepared for the Bangkok conference by UNISDR points out that in the past three years Asia has encountered a wide range of disasters, from cyclones in the Philippines and major flooding in China, India and Thailand, to severe earthquakes in Pakistan and Japan.

In 2011 alone, global economic losses from extreme weather events touched 366 billion dollars, of which 80 percent were recorded in the Asia-Pacific region.

While the region accounts for 39 percent of the planet’s land area and hosts 60 percent of the world’s population, it only holds 29 percent of global wealth, posing major challenges for governments in terms of disaster preparedness and emergency response.

FBOs believe they can fill this gap by giving people hope during times of suffering.

“It’s not about the goods we bring or the big houses we build,” argued Jessica Dator Bercilla, a Filipina from Christian Aid, adding that the most important contribution religious organisations can make is to convince people they are not alone on the long road towards rebuilding their lives after a disaster.

The FBO consortium that drafted the statement – including Caritas Asia, Soka Gakkai International (SGI) and the ACT Alliance – held a pre-conference consultative meeting here on Jun. 22nd during which some 50 participants from various faiths discussed the many hurdles FBOs must clear in order to deliver disaster relief and assist affected populations.

One challenge to including FBOs in national DRR frameworks is the prevailing fear that religious organisations will use their position as providers of aid and development services to push their own religious agendas.

In the aftermath of the 2004 Asian tsunami, for instance, Buddhist communities in Sri Lanka and Thailand, as well as Muslim communities in Indonesia, complained that FBOs tried to impose their beliefs on the survivors.

When IPS raised this question during the pre-conference consultation, it triggered much debate among the participants.

Many feel the fear is unfounded, as FBOs are driven by the desire to give value to human life, rather than a desire to convert non-believers or followers of different faiths.

“If beliefs hinder development we must challenge those values,” asserted a participant from Myanmar who gave his name only as Munir.

Vincentia Widyasan Karina from Caritas Indonesia agreed, adding that in the aftermath of the 2004 tsunami, Caritas worked among Muslim communities to rebuild the northern Indonesian region of Aceh, and “supported the Islamic community’s need to have prayer centres.”

Organisations like SGI go one step further by following methods like the Lotus Sutra for the realisation of happiness in all beings simultaneously.

“This principle expounds that Buddha’s nature is inherent in every individual, and this helps lead many other people towards happiness and enlightenment,” argued Asai, adding that in countries where Buddhists are a minority they work with other stakeholders. “If we form a network it is easier to work,” he added.

Given that an estimated one in eight people in the world identify with some form of organised religion, and that faith-based organisations comprise the largest service delivery network in the world, FBOs stand out as natural partners in the field of disaster risk reduction (DRR).

It also wants national and local governments to include FBOs when they organise regular consultations on DRR with relevant stakeholders, as FBOs are the ones who often sustain development programmes in the absence of international NGOs.

For example, since 2012 Caritas Indonesia has been working with a coastal community that has lost 200 metres of its coastal land in the past 22 years, in the Fata Hamlet of Indonesia’s East Nusa Tenggar Province, to build community resilience to rising seawaters.

The agency helped community members form the Fata Environment Lover Group, which now uses natural building methods to allow seawater to pass through bamboo structures before reaching the coast, so that wave heights are reduced and mangroves are protected.

Collectively, the three partners to the declaration cover a lot of ground in the region.

Caritas Asia is one of seven regional offices that comprise Caritas International, a Catholic relief agency that operates in 200 countries. SGI is a Japanese lay Buddhist movement with a network of organisations in 192 countries, while ACT is a coalition of Christian churches and affiliated organistaions working in over 140 countries.

All three are renowned for their contributions to the field of development and disaster relief. Caritas International, for instance, annually allocates over a million euros (1.3 million dollars) to humanitarian coordination, capacity building and HIV/AIDS programmes around the world.

“We would like to be one of the main players in the introduction of the DRR policy,” Takeshi Komino, head of emergencies for the ACT Alliance in the Asia-Pacific region, told IPS. “We are saying we are ready to engage.”

“What our joint statement points out is that our commitment is based on faith and that is strong. We can be engaged in relief and recovery activity for a long time,” added Nobuyuki Asai, programme coordinator of peace affairs for SGI.

Experts say Asia is an excellent testing ground for the efficacy of faith-based organisations in contributing to disaster risk reduction.

The region has also seen a steady increase in the number of Catholics, from 14 million a century ago to 131 million in 2013.

Forming links between these communities is easier said than done, with religious and communal conflicts plaguing the region, including a wave of Buddhist extremism in countries like Sri Lanka and Myanmar, a strong anti-Christian movement across Pakistan and attacks on religious minorities in China and India.

Some experts, however, say that the threat of natural catastrophe draws communities together.

According to Dr. Anil Kumar Gupta, head of the division of policy planning at the National Institute of Disaster Management in India, “When there is a disaster people forget their differences.

“I have seen the aftermath of disasters, where religious leaders and volunteers from Hindu temples, Islamic organisations and Sikh temples work together like born brothers,” he told IPS, citing such cooperation during major floods recently in the northern Indian states of Uttarakhand and Kashmir.

“FBOs need to be more visible as an organised constituency in the roll-out of future frameworks,” he stated.

Rego believes that the biggest contribution FBOs could make to disaster risk management is to promote peaceful living among different communities.

“Respecting other religions need not be done in a secular way,” he said. “It only happens when they work with other FBOs in an inter-faith setting.”