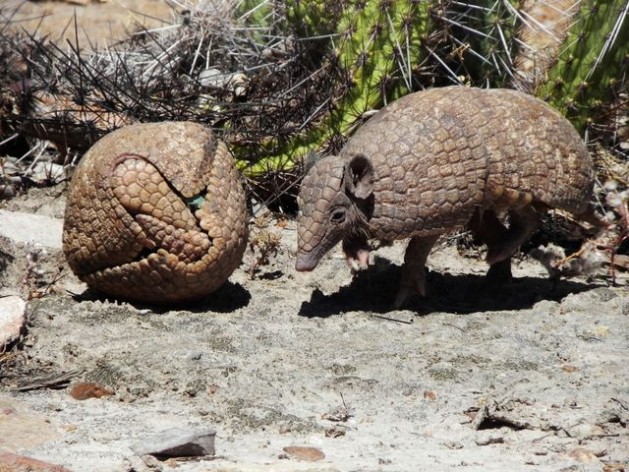 RIO DE JANEIRO , Jun 2 2014 (IPS) - The FIFA World Cup 2014 mascot was inspired by the three-banded armadillo, which is unique in its ability to roll up in a tight ball. The species is endangered in Brazil, which is hosting the upcoming global sporting event.

The idea emerged in 2012 from an online social networking campaign by the Caatinga Association, an environmental group that proposed the three-banded armadillo (Tolypeutes tricinctus) – known in Brazil as tatú-bola, or ball armadillo – as the symbol of the championship whose matches will be played from Jun. 12 to Jul. 13 in 12 cities in Brazil.

FIFA, the international football federation, accepted the proposal and named the mascot Fuleco – a portmanteau of the words “futebol” (football) and “ecologia” (ecology).

The three-banded armadillo is an exclusively Brazilian species, which is threatened with extinction, Rodrigo Castro, executive secretary of the Caatinga Association, a non-profit organisation that works in the preservation of the caatinga biome in Brazil’s semiarid northeast, told Tierramérica.

“It lives in a little-known and poorly protected ecosystem [the caatinga] and has an incredible ability to roll up into a ball when it feels threatened, due to its flexible bands of skin,” he added.

“Our question for FIFA is simple: the tatú-bola gave life to Fuleco – but Fuleco isn’t doing anything for the tatú-bola. Why not?” – Environmentalist Rodrigo Castro

The semiarid caatinga covers nearly 10 percent of Brazil’s national territory, encompassing an area between 700,000 and one million square km.

Millions of Fuleco plastic dolls, plush toys and other products carrying his image have generated a huge revenue inflow for FIFA, and have become a common part of the landscape in Brazil – unlike the small armadillo, which is increasingly rare in its habitat.

On the International Union for Conservation of Nature (IUCN) Red List of Threatened Species, the Tolypeutes tricinctus is listed as vulnerable.

But the Brazilian government plans to announce a change in the animal’s status next year, from “vulnerable” to “at risk of extinction.”

“This means that if nothing is done, the animal could be extinct in the next 50 years,” Flávia Miranda, a biologist and veterinarian with Projeto Tamanduá, a conservationist project, told Tierramérica.

The Tolypeutes tricinctus, endemic to Brazil, is one of two species of armadillo that can roll up in a ball. The other is the southern three-banded armadillo (Tolypeutes matacus), found in northern Argentina, southwestern Brazil, Paraguay and Bolivia. 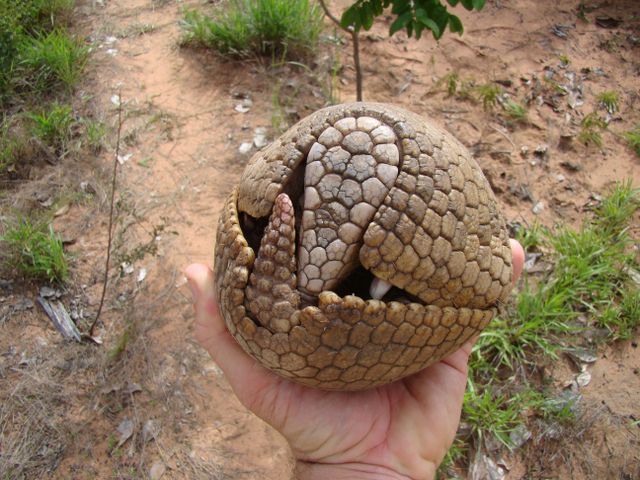 A three-banded armadillo rolled into a ball – the position that gave it the name “tatú-bola” in Portuguese – can fit in the palm of a hand. Credit: Marco A. Freitas

The three-banded armadillo has a combined head and body length of 45 cm and weighs approximately 1.5 kg. The armour is composed of three ossified dermal scutes connected by flexible bands of skin. Its diet consists mainly of insects.

The species has suffered a 30 percent decline in population in the last 10 years. “We estimate that it has lost 50 percent of its habitat over the past 15 years,” said Miranda, who is also a consultant to the Caatinga Association.

The main threat to the species, said Castro, is shrinking habitat, caused by deforestation in the caatinga and the neighbouring cerrado savanna ecosystem, which is characterised by low-growing bushes and scattered twisted short trees, where the armadillo also lives.

But hunting is a factor that cannot be ignored. “Hunting armadillos is a traditional cultural practice in rural communities,” Castro said.

“The meat is very popular,” Miranda said. “Many hunt it to sell the meat, because it fetches around 50 reals [23 dollars] a kilo.”

On the eve of the World Cup, Brazil’s Environment Ministry launched a five-year National Action Plan for the Conservation of the Tatú-Bola, drawn up together with the Caatinga Association.

The national action plan is a public commitment to preserve the species. “We are going to work together with universities and public and private institutions to reduce deforestation and hunting,” Miranda said.

The plan will also lead to the creation of conservation and reforestation units.

Ugo Eichler Vercillo, general coordinator of the government’s Chico Mendes Institute for Biodiversity Conservation, told Tierramérica that under the plan, a task force would be created to combat hunting of the armadillo.

In addition, actions will be promoted to compensate the loss of protein in poor communities where the armadillo is a target of subsistence hunting, he said.

One initiative will be “green grants” – monthly economic payments of 100 reals (45 dollars) for residents of poor rural communities, who will also be signed up to other social programmes and cash transfer schemes that target the extreme poor.

“These are populations who live on what they gather, plant and hunt,” in the remote hinterland of the states of Bahia, Pernambuco, Piauí, Ceará and Rio Grande do Norte, Vercillo explained.

These low-income residents of isolated rural areas value the armadillo “because they don’t have other sources of protein,” he said.

In 2013 the Caatinga Association, the IUCN and The Nature Conservancy launched the programme “I protect the tatú-bola”, aimed at curbing the risk of extinction.

“Our project, which should last about 10 years, will map the areas where the species is found, and we will collect information on threats, to work on them,” Miranda said.

Making the Brazilian armadillo the mascot of the FIFA games is aimed at turning it into “a kind of symbol for the preservation of the caatinga, and of other species of fauna and flora that inhabits this ecosystem,” she pointed out.

With its decision, FIFA says it hopes to increase awareness of the threat of extinction faced by the three-banded armadillo.

But Castro hopes for something more from FIFA. “Our question for FIFA is simple: the tatú-bola gave life to Fuleco – but Fuleco isn’t doing anything for the tatú-bola. Why not?”