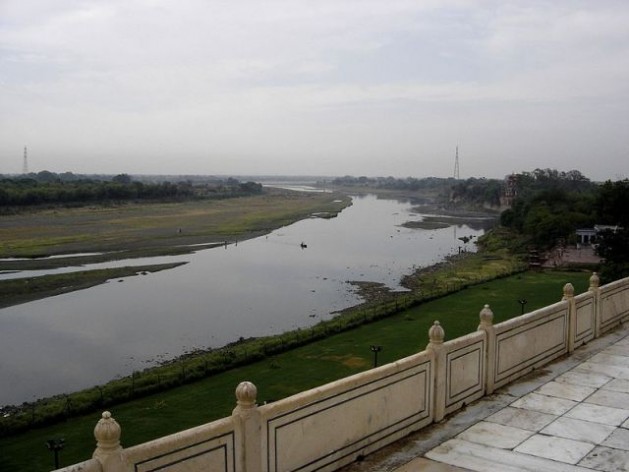 The fabled Yamuna River – revered by Hindus as a ‘living Goddess’ -- has been reduced to a stinking drain. Credit: Gérard Janot/cc by 3.0

NEW DELHI, Jul 7 2014 (IPS) - One of the first things that Narendra Damodardas Modi did after being anointed as the Indian prime minister on May 26 was to set up an exclusive ministry (Ganga Rejuvenation) under Water Resources Minister Uma Bharti to clean up the country’s national river, the Ganges.

However, the Ganges’ largest tributary, the Yamuna – also one of the most polluted in the world and which provides the capital city of Delhi with 70 percent of its water needs — was barely mentioned in Modi’s rhetoric.

"Entrenched corruption has stymied all attempts to address the problem. River cleaning is simply not a priority on the national agenda." -- an ecologist with Kalpavriksh

Critics point out that after a landslide win in the recent Lok Sabha (lower house) elections, Modi’s right-wing Hindu nationalist Bhartiya Janata Party has made numerous references to the Ganges’ pollution (including organising a pan-India meet on the river on Jul. 7 featuring top experts) while totally ignoring the Yamuna.

Such neglect is hardly new. Despite millions of dollars being pumped into numerous ambitious and state-funded schemes, as well as direct intervention by the Supreme Court and government agencies, the fabled Yamuna – revered by Hindus as a ‘living Goddess’ — has been reduced to a stinking drain.

According to the Central Pollution Control Board, the country’s premier pollution monitoring agency, Delhi alone contributes up to 80 percent of the pollution load of the 1,370-km river. In 2010, the Indian Supreme Court even referred to the Yamuna as a “ganda nullah” (“dirty drain”) rather than a dirty river.

The Yamuna plays a pivotal role in Delhi’s life, providing water for nearly 57 million people who live in its floodplains. Most importantly, 92 percent of the river’s waters are used to irrigate 12.3 million hectares of agricultural land that feeds a sizeable portion of India’s 1.2 billion people.

The river’s pristine beauty even prompted the Mughals to build one of their most spectacular monuments on the Yamuna’s banks — the Taj Mahal.

Yet today, the river is impacted deeply by pollution as garbage from millions of households, municipal disposals and soil erosion due to deforestation sullies the river each day. Toxic chemical substances — insecticides, fertilisers, pesticides – only worsen the situation.

A World Health Organisation urban air quality database released on May 9 this year rang alarm bells in Delhi’s power corridors, forcing the administration to sit up and take note. According to the report, the air quality in Delhi is the worst in the world, with polluting industries brazenly discharging much of their refuse into the Yamuna in the absence of strong punitive action.

Following the report, Delhi’s Lieutenant-Governor Najeeb Jung constituted a high-powered committee – consisting of scientists and ecologists – to examine all aspects of air pollution, including pollution in the Yamuna caused by industrial and sewage discharges. The committee has been tasked with suggesting steps to check pollution and to devise both long-term and short-term measures to tackle this serious issue.

Experts say the extent of pollution of the Yamuna River is so shocking that it now has a permanent thick layer of foam covering it completely. Yamuna is often also described as a ‘dead river’ since its pollution has seriously inhibited the survival of fish or other marine life in its waters.

“The Central Air and Water Pollution Prevention Act gives unrestricted powers to these statutory bodies to proceed against polluters but entrenched corruption has stymied all attempts to address the problem. River cleaning is simply not a priority on the national agenda,” says an ecologist with Kalpavriksh, a pan-India green NGO.

Although a large number of NGOs, pressure groups and citizens’ movements have been active in cleaning up the Yamuna, given the size and dimension of the problem, these piecemeal and sporadic efforts have not yielded any tangible benefits, adds the activist.

Environmentalists assert that treatment of effluents before their release into the river is far more vital than keeping a tab on the river and drains.

“We should learn from how countries abroad are scientifically recycling these wastes and using them for construction of new buildings and roads. Singapore recycles 98 per cent of its construction and demolition (C&D) waste. We need to better the existing systems,” says Delhi-based environmentalist Anumita Roy Chowdhury.

Until now, experts say, the Centre has spent approximately 300 million dollars under the Yamuna Action Plan (YAP) I and II to clean the river. The YAP’s first phase was launched in 1993. It then covered Delhi, eight towns in the northern state of Uttar Pradesh and six towns in the state of Haryana.

Under YAP II, the focus was on the Yamuna’s 22-km stretch in Delhi. The government plans to spend another billion dollars in the next phase to clean the river.

Experts add that pesticide traces in the water cannot be removed with conventional treatment as has been the case so far. “It’s like trying to slay a dragon with a pen knife,” explains B.R. Rao, an environmental scientist formerly with the ministry of environment and forests.

“For micro pollutants such as pesticides, only more freshwater can reduce the percentage of traces in water. These cannot be dissolved or assimilated, but they can certainly be diluted to an extent which will gradually help whittle down the levels of pollution in the river,” adds Rao.

The Yamuna has a dilution requirement of 75 percent, explains Rao, which implies that for every 100 litres of wastewater, 75 litres of freshwater needs to be pumped into the river. With this fresh flow of water, pollutants (especially organic pollutants) dissipate to a large extent.

But at every step, this purified water is abstracted, and ever larger loads of pollution make their way into the river.

However, according to the Delhi-based think tank Center for Science and Environment, the main problem lies in the sub-optimal utilisation of the city’s sewage treatment plants (STPs).

Says Sushmita Sengupta of CSE, Delhi’s 17 STPs have a capacity to treat 2,445 MLD (million litres per day). “Going by the Comptroller Auditor General 2013 Report sewage generation estimate of 3,060 MLD, the city can treat about 80 per cent of its waste, but it actually treats 1,651 MLD, approximately 54 percent Why is Delhi unable to treat its sewage completely?”

Of its installed capacity of 2,445 MLD, about 585 MLD remains unutilised (as of 2011-12). With only 1,218 MLD of sewage being treated, there exists a wide gap between what is treated and what is not. In other words, about 46 per cent of the total waste generated by Delhi goes untreated into the river Yamuna.

Water experts also point out that the problem of sewage not reaching a treatment plant is also what scuppers the plans to clean the Yamuna. The city depends on its 6,400-km sewerage network to convey its waste to treatment facilities. But most of the time, this network does not function, leaving the treatment plants starved for sewage.

Illegal or unauthorised colonies only worsen the situation. Almost 50 per cent of Delhi lives in such colonies, generating ‘illegal’ sewage – sewage which is not transported in official sewers to official treatment plants. These colonies do not have drains to transport sewage.

The people living in these areas either defecate in the open or connect their wastewater drains to an open channel, which flows into a larger drain and eventually into the river.

“A paradigm shift is required in Delhi’s approach to clean the river. The city planners must swivel their attention from the standard hardware – sewer and STP – to comprehend the linkages between water, sewage and pollution and most importantly, the need for authentic data. The science on river cleaning needs a drastic change in India,” sums up Sengupta.