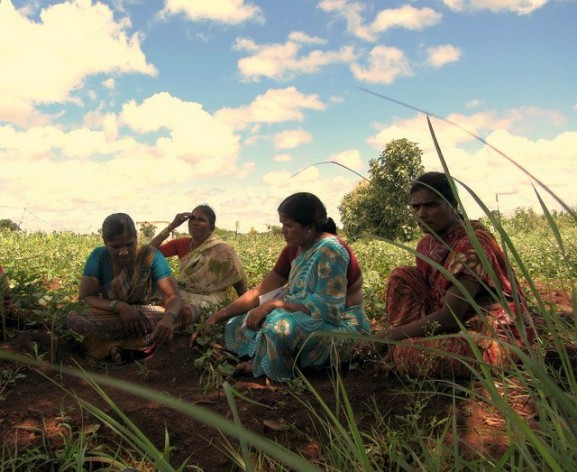 MALLAMPETA, India, Jul 4 2014 (IPS) - Nine months after she was elected head of her village council, 36-year-old Krupa Shanti has overseen some significant changes in this rural outpost of Mallampeta, 570 km away from Hyderabad, capital of the southeastern Indian state of Andhra Pradesh.

“Since I took over, 300 people have got their Below the Poverty Line (BPL) ration cards and are receiving subsidised food, and another 200 people have received their voter cards,” Shanti told IPS.

But the village’s first woman leader has not been able to change the one thing that is closest to her heart – the sanitation for the women in her community.

“I have not received the necessary funds to construct a single toilet,” Shanti said, adding that she was extremely frustrated that she and her female colleagues are still forced out into the bushes and fields to relieve themselves.

Rani’s office, which she joined in August 2013, is in an old, dilapidated building that has no running water and no sanitation facilities.

“Every time I want to use a toilet, I have to rush home,” she told IPS, barely concealing her anger. “How can a person work in such conditions?”

Still, Rani is luckier than her colleagues; of the nine women on the 10-member village council, she is the only one to own a toilet at home and is spared the shame of having to defecate out in the open.

Many of the women in Chowtapalli had hoped becoming council members would lead to a life of dignity, a dream they now find crushed.

Lack of toilets is a common problem across India, a country of 1.2 billion people that has the dubious distinction of denying adequate sanitation to nearly 60 percent of its citizens.

According to a recent report by the World Health Organisation (WHO), India also tops the list of countries with the highest number of people (58 percent of the population including women and girls) who defecate in the open.

The 2011 census found that nearly 70 percent of rural households, as well as over 18 percent of homes in towns and cities, don’t have toilets.

Census data from the same year showed that more people in India had cell phones (59 percent of households) than toilets (47 percent), a figure that also accounted for dry, open-pit latrines.

The situation is particularly worrying for rural women politicians, who say the cumbersome process of having to relieve themselves in public is prohibiting them from carrying out their duties.

Many are also alarmed by the spate of violent attacks on women across rural India, who are stalked by sexual predators and raped, molested or mutilated when they venture out into the fields at night.

One such incident on May 28 stunned the entire nation, when images of two teenage girls from the village of Katra Shadatganj (228 km southwest of New Delhi), who were raped and hung from trees, began to make the rounds on social and print media.

Since then, at least four other similar cases have been reported in the same region. It subsequently emerged that each of these women came from homes that did not have toilets, and were accosted while attempting to relieve themselves at night.

Now, local councilwomen are beginning to fear for their own lives as a result of inadequate sanitation facilities.

Thotakurra Kamalamma, a politician from the eastern coastal village of Kodi Thadi Parru, says her local council has never had a toilet. Though it didn’t deter her from participating in local politics before, the Katra Shadatganj incident has shaken her to the very core, leaving her fearful of suffering a similar fate, she told IPS.

“I have a daughter. If anything happens to me someday, who will look after her?” asks Kamalamma, who has decided to resign from her post.

Chowtapalli Councilmember Swaroopa Chamtla is also considering quitting – something her husband is also asking for.

“I have political rivals now whom I defeated in the election,” she told IPS. “What if they follow me to the field or the bush and attack me there? It’s happening everywhere, isn’t it?” she said.

The government of India currently provides building materials at subsidised costs, as well as cash grants, to rural families for constructing toilets.

But according to Krupa Shanti, one of the first women to attempt to make the down payment of 10,000 rupees (about 180 dollars) even the government rate is cost-prohibitive for many rural families, in a country where an estimated 30 percent of people live below the poverty line of 1.25 dollars a day.

She also alleged that officials in city government offices are indifferent to the plight of women in villages, and therefore delay approval of funds for toilets.

Independent studies partially support her views; according to a 2011 World Bank report, government funds for sanitation in India were woefully inadequate.

The Bank also found that the country lost an estimated 53.8 billion dollars in 2006 alone as a result of poor sanitation, a figure equivalent to about 6.4 percent of the country’s GDP.

While bodies like the United Nations have called repeatedly for increased participation of women in local-level politics, little attention has been given to the specific challenges posed by a widespread lack of sanitation.

Aparajita Ramsagar, an independent sanitation consultant and former project director for SEWA Bharat, a union of self-employed women, says that during 2010-2011 the government increased reservation of seats for women in village councils from 33 to 50 percent.

“The aim of the increased reservation was to have more women join the political process. But [the government] had not envisaged the increased sanitation needs of women in the councils,” Ramsagar told IPS.

Most officials, however, refute these allegations. According to Narsimha Rama Murthy, senior engineer at the sanitation department of Visakhapatnam, the largest city in Andhra Pradesh, delays in funding are due to lengthy processes governing state finances, rather than an indifference on the part of officials.

“We have to inspect and check the situation before approving petitions [for funding]…One has to follow a process,” he told IPS.

Furthermore, problems arising from a lack of toilets cannot be solved without simultaneously tackling the twin problem of the water supply in rural India.

Sukhantibai Partiti, who heads the Handitola Village Council in the central Indian state of Chhattisgarh, has been trying for six years to implement the government-sponsored Total Sanitation Campaign (also known as Nirmal Bharat Abhiyan), which aims to eradicate open defecation by 2017 – to no avail.

She says this is largely due to limited access to clean water.

“For nearly six months of the year, we depend on a single pond in the village for all our water needs,” the second-time village head, who still does not have a toilet in her own home, told IPS.

“But, while we can carry a few pots of water for cooking and drinking, it is not possible to carry buckets of water to flush a toilet,” she added.

Disappointed at the lack of opportunities available to local politicians, she has decided not to run for a 3rd term in office; she says the indignity of running around looking for a place to relieve herself has made the job untenable.