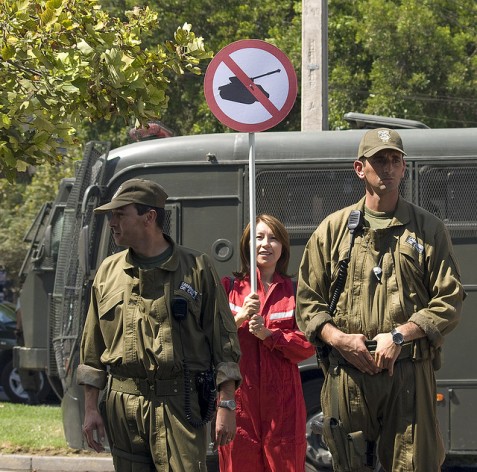 Nonviolent rally in front of the US Embassy in Chile, asking for the withdrawal of US troops from occupied territories. Credit: Rafael Edwards/Ressenza via Flickr/ CC 2.0

CAPE TOWN, Jul 8 2014 (IPS) - Peruse a few reports on global military expenditure and you will not be able to shake the image of the planet as one massive army camp, patrolled by heavily weaponised guards in a plethora of uniforms.

Last year, the world spent about 1.76 trillion dollars on military activity according to the Stockholm International Peace Research Institute (SIPRI). The year before, arms sales among SIPRI’s ‘Top 100’ companies touched 410 billion dollars. It is estimated that 1,000 people die from gun violence every single day.

The newly founded Pan African Network on Nonviolence and Peacebuilding is the first regional initiative of its kind dedicated to connecting African grassroots organisers around nonviolent resistance.
But scattered amongst the barracks of this planetary war zone are scores of white flags, wielded daily by the many millions of people engaged in nonviolent resistance to the forces that threaten their existence.

Nearly 120 of these peace activists are currently assembled in Cape Town’s City Hall, for the quadrennial meeting of the 93-year-old War Resister’s International (WRI), a global network of activists from far-flung regions fighting on every imaginable front, from anti-trafficking in Australia to peace and reconciliation in Rwanda.

Returning to the very pulpit from where he led the historic 1989 March for Peace, Archbishop Desmond Tutu addressed the forum’s participants Saturday night by invoking memories of the long and bloody struggle against apartheid.

“Take our thanks back to your countries,” he told the audience, “even the poorest of which stood ready to receive South African exiles and refugees.” Drawing on the conference’s theme ‘Small Actions – Big Movements: the continuum of nonviolence’, he urged greater collaboration between disparate movements, in order to find strength in unity.

“With almost no money but a lot of passion and an understanding of the need for unity in the face of militarism, violence, and a re-colonisation of the land, we brought together people from every continent and 33 African countries to say: ‘We will continue to resist. We will build a beautiful new tomorrow.’”

Running from Jul. 4-8, the gathering offers a bird’s eye view of the life-affirming campaigns that often get pushed off front pages in favour of headlines proclaiming death and war.

Other tangible successes include the long list of victories recently secured by the Palestinian Boycott, Divestment and Sanctions (BDS) movement, according to Omar Barghouti, a founding committee member of the Palestinian Campaign for the Academic and Cultural Boycott of Israel (PACBI).

With three basic demands (ending the occupation as defined by the 1967 borders; ending Israel’s system of legal discrimination against Palestinians; and enforcing the right of return for Palestinian refugees), the civil society initiative calls for the same global solidarity that erupted during the fight against apartheid in South Africa, and urges companies to withdraw their investments from firms that directly profit from the occupation of Palestine.

In the last three years alone, many major pension funds in Europe have divested from Israeli banks, including the 200-billion-dollar financial giant PGGM, the second-largest pension manager in the Netherlands.

With women and children disproportionately impacted by conflict and militarisation, the Women Peacemaker’s Program (WPP) played a major role in the conference, releasing its annual May 24 report here just days before the WRI gathering.

Organising their work under the larger umbrella of what WPP Program Officer Sophie Schellens called “gender sensitive active nonviolence”, the organisation is comprised of a network of some 50 partners based on every continent.

“This is a politically sensitive topic, since we are analysing militarism and the military from a gender perspective,” Schellens told IPS.

“For instance, an indigenous Manipur-based woman activist in our network, Sumshot Khular, connects the links between militarism, development and politics, and the specific effects of this alliance on women.”

An article by Khular in WPP’s report, ‘Gender and Militarism: Analyzing the Links to Strategize for Peace,’ notes that South Asia is home to more than 160 million indigenous people, yet few governments formally recognise their rights, leaving many at the mercy of developers carrying out coal and uranium mining, and oil and gas exploration.

“The aggressive development models associated with intensive militarisation have been ravaging not only our land and resources, but also our people – especially women and girls,” Khular writes.

According to Schellens, these affected women are now coming together in large numbers to “defy these militarised structures.”
In addition, the 810-billion-dollar sovereign wealth fund of Norway decided this year to pull investments from Israeli firms operating in the West Bank; the Luxembourg Pension Fund followed suit, citing ethical concerns over the building of settlements on occupied Palestinian land.

In addition, said Barghouti, “Bill Gates, the richest man in the world, recently divested from the British-Danish-owned G4S, one of the largest private security companies in the world; the United Methodist Church – one of the richest in the U.S. – pulled its 18-billion-dollar fund out of companies operating on occupied Palestinian land; and the Presbyterian church has divested from companies like Caterpillar, HP and Motorola Solutions because of their involvement in the occupation.”

With its 15-billion-dollar defense budget, the Israeli government is not taking this lightly, and has identified the BDS movement as a strategic, rather than societal, threat.

“Israel recently shifted overall responsibility for fighting BDS from the ministry of foreign affairs to the ministry of strategic affairs,” Barghouti said Monday, “the same ministry that deals with the Iranian threat, and Israel’s relationship with the U.S.”

Elsewhere, too, authoritarian regimes are recognising the legitimate power of nonviolent resistance. A South Sudanese activist, wishing to be identified only as Karbash A M, told IPS that the Sudanese government in Khartoum has issued a blanket ban on NGOs conducting nonviolence trainings among refugee communities.

But in the face of a political crisis that has claimed tens of thousands of lives since South Sudan declared independence in 2011, Marmoun said, a handful of organisations continue to train hundreds of community leaders and youth activists in the tactics of nonviolence, even as a wave of arms and ammunition threatens to drown the country.

Documenting over 14 case studies of peaceful resistance, the second edition of WRI’s Handbook for Nonviolent Campaigns, released here Sunday, offers a tip-of-the-iceberg analysis of the proliferation of nonviolent movements around the world, from protests against the Indonesian military in West Papua, to the diaspora solidarity movement for Eritrea.

Recognising a continuum between the moral commitment to nonviolence adopted by Gandhi, the strategic decision to exercise nonviolence in Eastern Europe in the 1980s, and a “willingness to use nonviolent methods […] but no commitment to avoid low-level physical violence,” the Handbook offers practical advice to activists and organisers from Colombia to South Korea and beyond.

Another major development here this week was the founding of the Pan African Network on Nonviolence and Peacebuilding, the first regional initiative of its kind dedicated to connecting African grassroots organisers around nonviolent resistance.

“I am delighted we have been able to give birth to this network here in Cape Town,” Nozizwe Madlala-Routledge, executive director of the South Africa-based organisation Embrace Dignity – which fights to end sex trafficking and the commercial exploitation of women – told IPS.

“At the last count, 33 African countries are represented in the network, with a 16-member steering committee, each from a different country.

“We are also making an effort to ensure representation from island states like Mauritius and the Canary Islands,” she stated, adding that the network will play a crucial role in elevating the voices of civil society on issues of governance, development and corruption.

Experts here say such a network could be hugely important in combating the U.S.’ increased military presence in Africa, such as plans to construct a 220-million-dollar Special Operations compound at the base of the U.S.’ Camp Lemonnier in Djibouti.

The actions may be small, but their impacts are felt at the highest level.

“We can now call ourselves the ‘three percent people’,” Anand Mazgaonkar, a representative of the National Alliance of Peoples’ Movements (NAPM) in Gujarat, India, said at a plenary session Monday, “because a recent intelligence report in India has named all of us involved in movements as collectively responsible for a three percent damage to the country’s gross domestic product (GDP).”