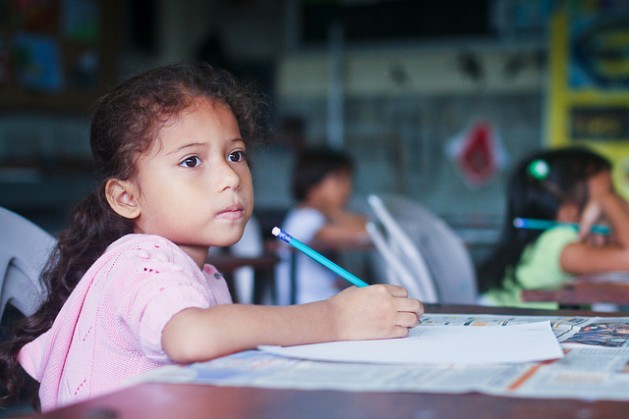 The U.S. Department of Education has recently strengthened its focus on reducing nationwide racial and socioeconomic disparities within school discipline. Credit: Bigstock

WASHINGTON, Jul 9 2014 (IPS) - The U.S. government has moved to tackle longstanding patterns of inequitable teacher quality, specifically in terms of how low quality teachers tend to be assigned to poor and marginalised communities across the country.

Both students of colour and students in high-poverty schools are less likely than their counterparts to receive highly effective teaching. On Monday, the U.S. Department of Education launched an initiative aimed at addressing what Education Secretary Arne Duncan calls the “systemic inequities that short-change students in high-poverty, high-minority schools across our country.”

"Students of colour and students of high-poverty status are more likely to attend schools where less money is spent and where less extracurricular activities are offered, so the problem is much larger than just the teachers.” -- Dwanna Nicole

The problem is not only the lack of a solid teacher support and development system. According to President Barack Obama, also speaking Monday, “the kids who need the most skilled teachers are the least likely to get them.”

The Department of Education will now require states submit comprehensive plans to assign “effective educators” to poor and minority students. To implement these plans, the federal government will be offering some 4.2 million dollars in grants.

The government will also publish regular profiles evaluating how states and districts are improving their teacher equity.

While education associations and advocates are applauding the move, many are questioning the initiative’s scope and details. Although the government’s announcement noted that it will mandate states to “ensure every student has effective educators”, it did not specify how officials would measure educator effectiveness.

“We think that it is a commendable short-term effort to help combat inequity in the classroom,” Dwanna Nicole, a policy advocate for the Advancement Project, an advocacy group, told IPS.

“At the same time, we believe the inequity issue is much larger. We know that students of colour and students of high-poverty status are more likely to attend schools where less money is spent and where less extracurricular activities are offered, so the problem is much larger than just the teachers.”

For instance, Nicole notes that the Department of Education has recently strengthened its focus on reducing nationwide racial and socioeconomic disparities within school discipline.

“But it would be great to see more resources devoted to that effort as well … We want school districts to understand the harsh consequences of these extreme policies,” she says.

“A lot of the time, young people also need additional support – this includes mental health support, after-school support. And we also want there to be better training available for teachers.”

Furthermore, rather than solely considering standardised test scores to be a measure of educator effectiveness, Nicole says that the government needs to take into account additional factors, such as teachers’ success with classroom management techniques.

The National Educators Association (NEA), a prominent labour union, also says that it “fully supports the idea that students in challenging schools must have fully prepared and effective educators.” Yet the group noted its concern over the Education Department’s lack of definition for an “effective educator”.

Although inequity within teaching quality has existed for some time, recent estimates have suggested that this disparity could become costly to the country as a whole.

In 2011, researchers with the Center for American Progress (CAP), a think tank here, published a district-by-district evaluation. They concluded that “highly productive districts were more focused on improving student outcomes,” while low-productivity school districts were more likely to be comprised of “students from more disadvantaged backgrounds” – and had the potential to “cost the nation as much as $175 billion a year.”

CAP is slated to release updated findings on the issue on Wednesday. The centre’s executive vice president for policy, Carmel Martin, has thrown her support behind the new Department of Education initiative, characterising it as an “effort to ensure that excellent educators are teaching in the classrooms that need them most.”

Advocates are now turning their focus to how the states will respond. Education policy has become a politically explosive issue in recent years, with some conservatives urging the abolition of the Department of Education altogether.

“The U.S. Department of Education should expect states to report their data and set meaningful goals for addressing inequity where it exists. And it should hold states accountable for meeting those goals,” Daria Hall, the director of K-12 policy development at the Education Trust, an advocacy group, told IPS.

However, Hall also warned that the department should not mandate specific approaches for the states to follow in their attempts to achieve equity.

“The specific strategies are best developed by states and districts, as they’re the ones who are closer to the problems and best able to develop targeted responses,” she says.

“That said, it is important to find and elevate examples of strong, equity-focused local policies and practices, and that’s something the Department can and should do through guidance and technical assistance.”

In addition to using multiple measures to assess teacher effectiveness, Hall believes that a variety of teacher development opportunities should be afforded to educators.

“Forced placement will not be an effective strategy for achieving equitable access. So states and districts should be focused instead on putting in place policies and practices that draw strong teachers to the low-income students and students of colour who need them the most,” she says.

“This means focusing on effective hiring practices, strong school leadership, supportive school climate and culture, and opportunities for professional advancement for those teachers willing to take on the challenge of teaching in high-need schools.”