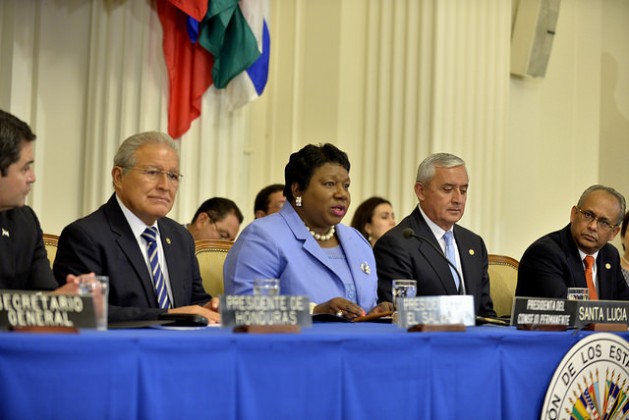 The presidents of Guatemala, Honduras and El Salvador speak at the Organisation of American States on Jul. 24, 2014 in Washington, DC. Credit: Juan Manuel Herrera/OAS

WASHINGTON, Jul 25 2014 (IPS) - As the presidents of El Salvador, Honduras and Guatemala prepare to meet with President Barack Obama Friday, more than 40 organisations issued a petition urging U.S. lawmakers to meet their “moral and legal obligations” by providing emergency aid to Central American children and families.

The petition, spearheaded by the Washington Office of Latin America (WOLA), an advocacy group here, insists that “more border security will not help,” and is instead calling for the U.S. to provide children and families with “all due [legal] protections” and “face the root causes of violence at the community level.”

“What we’d like to see [from Friday’s meeting] is a package of assistance to Central America that is focused entirely on the civilian side of what it takes to protect.” -- Adam Isacson

In the last nine months, more than 50,000 unaccompanied children have crossed the U.S. southern border, and the wave shows no signs of abating. Many are now facing deportation.

Less than 24 hours after WOLA released their petition, a separate batch of legal groups accused the U.S. government of violating both international and domestic law, based on its inspection of the New Mexico-based Artesia Family Detention Facility.

After representatives from 22 organisations interviewed families detained at Artesia, the groups concluded that the U.S. government is violating both their moral responsibility to provide the refugees with physical and mental health support, as well as their legal obligation to guarantee them due process.

“Family detention is always an awful and damaging process, but the conditions at the Artesia Family Detention facility in New Mexico should make every American hang their head in shame,” the groups said in a statement.

“The Administration’s intent to deport everyone as quickly as possible for optics is sacrificing critical due process procedures and sending families – mothers, babies, and children – back despite clear concerns for their safety in violation of US and international law.”

While such humanitarian concerns surrounding the Central American migration crisis persist from a variety of sources, top officials from both the U.S. and Central America are considering both long-term and short-term intervention from the top-down.

As a pre-cursor for Friday’s meeting between U.S. President Obama and the Central American presidents, foreign ministers from the three respective nations – collectively known as the “Northern Triangle” – convened on Thursday at the Wilson Center, a think tank here, to discuss the crisis’ roots and debate its solutions.

While all three of the Northern Triangle’s representatives agreed that there was not one cause behind the current crisis, they collectively cited the drug smuggling network, the prevalence of organised crime, and lack of taxpayer dollars as their biggest problems.

As such, the three ministers advocated for “all-encompassing” reform, both to stop the short-term crisis at the border, and to provide economic and educational opportunities- such as universal secondary school coverage- for children and adults alike.

While Michelle Brané , director of migrant rights & justice at the Women’s Refugee Commission (WRC), a New York-based advocacy group that participated in Artesia’s inspection, agrees with the Northern Triangle’s conclusion that such a “holistic response…addressing root causes” is necessary, her central issue is with U.S. justice system.

“The problem is that our court system is woefully under-funded,”Brané told IPS, hopefully adding that “we can create a due process system that works,” even if it takes years.

Clarifying that she is “not saying everyone should stay, [but rather] that everyone should have a fair shot at presenting their case,” Brané believes that providing attorneys to represent these migrants and using alternative detention centres, such as shelters and community support programs,  are both more humane and “cost-effective” solutions than the status quo.

Asked about the desired outcome of Friday’s presidential meeting, Brané informed IPS that she would like to see “[the U.S.] take a leadership role in protection, as opposed to a ‘close the borders’ stance and lack of respect for human rights law.”

“This is more than just something that requires them to stem the flow to stop up the borders,” Brané told IPS. ‘It really requires…strengthening protections systems, as opposed to interception.”

“What we’d like to see [from Friday’s meeting] is a package of assistance to Central America that is focused entirely on the civilian side of what it takes to protect,” Isacson told IPS.

While his list of desired protections included “getting police to respect people”, “a much stronger justice system,” and “more emphasis on creating opportunities,” Isacson added that such requests be “combined with Central American presidents’ commitment to raise more taxes from their wealthiest.”

Isacson further agrees with WRC’s Brané in that there is a need for systematic reform of the U.S legal system, calling for “more capacity” and a reduction in the average trial’s wait time, which he believes can be up to two or three years.

Yet others, including the Virginia-based Negative Population Growth (NPG) nonprofits, have expressed different legal concerns.

“Asylum and refugee status is something for specific persecution, and it’s not intended to be a relief measure for general societal strife,” Dave Simcox, senior adviser of NPG, told IPS.

Simcox also told IPS that there is a distinction between being trafficked and being smuggled, and while “a few [migrants] will be able to make the case that they were taken against their will for exploitation,” he ultimately agrees with NPG President Don McCann, who argued in a statement that “granting refugee or temporary protected status on the current wave from Central America would be a disastrous precedent,” and that U.S leaders should instead apply “strong deterrent measures” by “supplementing border forces” with additional personnel and fencing.

But Isacson thinks “judges will get it right much more than border patrol agents on the spot will get it right,” and believes that that providing due process to such migrants is the best way for the U.S. to “enforce its own laws.”