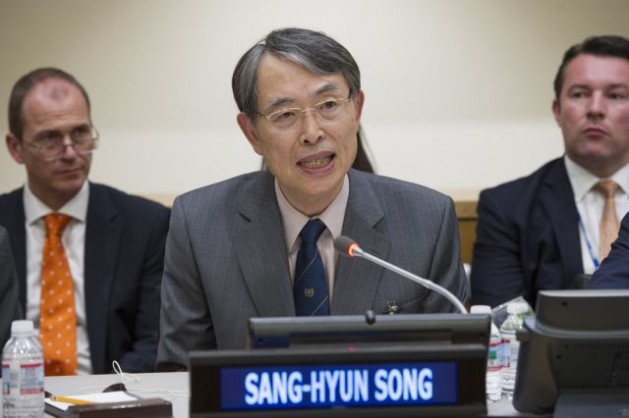 UNITED NATIONS, Jul 22 2014 (IPS) - Despite making important strides in the first dozen years of its existence, the International Criminal Court (ICC) faces a daunting task if it hopes to create a reputation as a truly global institution.

With a skewed distribution of states parties and cases, the ICC has struggled to mature at its seat in The Hague as an effective and comprehensive purveyor of justice.

“It is a global entity. It is not a universal entity.” -- William Pace

The Rome Statute, the ICC’s founding treaty, authorises the Court to prosecute individuals who have committed genocide, crimes against humanity or war crimes. It was adopted in 1998 and came into force in 2002.

Some 122 states have ratified or acceded to the Rome Statute, but many of the world’s most populous countries have remained outside its jurisdiction.

William Pace, the convenor of the Coalition for the International Criminal Court (CICC), told IPS, “[The ICC] doesn’t apply to half the people on the planet, but it applies to almost two-thirds of the member states of the United Nations, which is also over three billion people.

“It is a global entity,” he said. “It is not a universal entity.”

Richard Dicker, director of Human Rights Watch’s international justice programme, told IPS that “There is unevenness in state party representation, with Asia, the Middle East, and North Africa in particular being starkly missing.”

The most crucial impediment to the ICC’s global reach is the fact that the United States, Russia and China have not joined the ICC and continue to obstruct its functioning with U.N. Security Council vetoes.

Cases can be brought to the ICC by the chief prosecutor, by the countries themselves or by referral from the Security Council. The judicial functioning of the Court is independent of the United Nations, but when Security Council referrals become involved, politics can easily creep in.

Most recently, Russia and China prevented the Security Council from referring the conflict in Syria to the ICC on May 22.

“These three who have remained outside the reach of the Rome Statute of the ICC have shielded themselves and, through their use of the veto on the Council, their allies from accountability when national courts in those countries don’t do the job,” he said at a recent press conference on the future of the ICC.

Without U.S. ratification of the Rome Statute, the ICC will find it difficult to achieve global legitimacy.

Dicker told IPS that the United States’ attitude has slowly evolved since the early 2000s, when “the [George W.] Bush administration was on a crusade against the International Criminal Court.”

In the wake of increased flexibility towards the Court in the later Bush years, “the Obama administration has significantly strengthened the cooperation afforded by the U.S. government to the Court,” he said. However, U.S. diplomatic support for the Court has only extended to “situations where the Court’s position and U.S. foreign objectives coincide.”

The U.S. Congress has not overturned the American Servicemembers Protection Act of 2002, also known as the “Hague Invasion Act.” According to Human Rights Watch, the law “authorizes the use of military force to liberate any American or citizen of a U.S.-allied country being held by the Court.”

The United States’ non-participation in the ICC damages the Court, but not irrevocably.

“It was constantly said throughout the treaty negotiation period of the 1990s and the ratification period of the last decade that if you don’t have the United States as a part of the ICC, it won’t work,” Pace told IPS. “Well, it is working, even with the handicap of having the great powers against it, but it is up, it’s running and I don’t know a week that goes by that someone doesn’t invoke the ICC.”

As the Court conducted its first investigations and prosecutions, it encountered significant opposition from the African Union (AU). All eight of the countries currently under investigation by the ICC are African, spurring accusations that the Court is unfairly targeting the continent.

The cases in Uganda, the Democratic Republic of the Congo, the Central African Republic, and Mali were referred to the ICC by the countries themselves, while the cases in Sudan and Libya were referred by the Security Council and the cases in Kenya and Côte d’Ivoire were brought to the Court by the chief prosecutor.

“The politics of Kenya and Sudan are escalating the tensions between the ICC and the African Union,” Stephen Lamony, the CICC’s Senior Adviser for Africa, told IPS.

The indictments of President of Sudan Omar al-Bashir and Uhuru Kenyatta – who was later elected president of Kenya – in 2009 and 2011 provoked criticism by the AU that the ICC was a tool of Western imperialism.

Why is a court based in Europe targeting African leaders, critics ask, but ignoring atrocities in Syria, Gaza, or North Korea?

The AU has been developing an African Court of Justice and Human Rights to compete with the ICC, “to ensure that Africans are prosecuted in Africa,” said Lamony.

However, at the end of June the AU voted to give sitting heads of state immunity from the incipient African Court, leading African grassroots activists to fume that the problem is not the ICC, but the culture of impunity amongst African leaders.

“The heads of state are trying to protect themselves, and the ordinary man and woman are saying ‘no, you should be held to the same standards. You should stop committing these crimes against us,’” Lamony told IPS.

Six of the 10 situations under preliminary examinations by the ICC are in non-African countries. If one of these countries is chosen to be the next object of investigation, the Court may dispel some, but not all of the criticism it has received for focusing on Africa.

According to Lamony, “At this stage, no African leader is threatening to withdraw from the ICC,” because the condemnation of the Court mainly comes from countries that are not states parties.

Despite the imbalance in the makeup of the ICC’s states parties and its Africa-heavy case load, much of civil society is convinced that its very existence changes the international landscape.

“Justice is not living in tents or trailers anymore. It is now a permanent institution in the ICC,” Dicker said. “And that fact alone spurs expectations and demands for justice where mass atrocity crimes occur.”