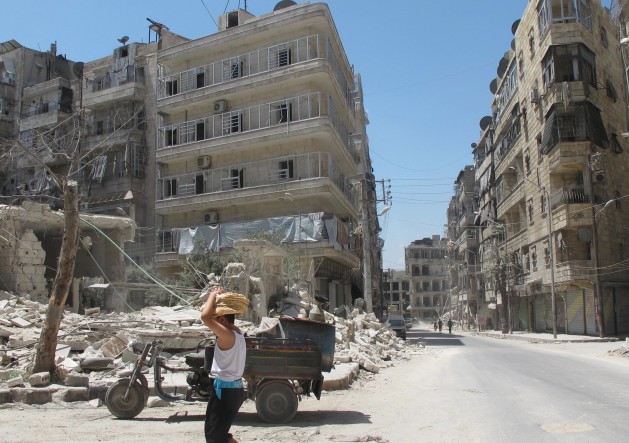 All lorries with wheat for the areas’ underground bakeries, soap for hygiene purposes, and fuel for vehicles and generators travel by this route. While snipers focus on this road and other frontlines throughout the city, regime barrel bombing is meanwhile steadily, painfully reducing the rest of the city to rubble.

Although many areas are now under the control of the more moderate Islamic Front, Al-Qaeda affiliate Jabhat Al-Nusra helps provide for basic needs in some areas where the underfunded Syrian National Council-linked administration is unable to do so.

While snipers focus on this road [the only remaining supply road into the rebel-held, eastern area of the city] and other frontlines throughout the city, regime barrel bombing is meanwhile steadily, painfully reducing the rest of the city to rubble

IPS watched as members of the armed group handed out metre-long rectangular blocks of ice, after they slid down a metal shaft to armed men waiting to give them to inhabitants waiting nearby who have been without electricity and running water for months.

‘’They’re good people,’’ said one inhabitant of the city, who nonetheless had been arrested by them for undisclosed reasons a few months back. ‘’They’re friends.’’

In private, however, many Syrians will say that they are not happy with the group, though it is ‘’not anywhere near as bad as ‘Daeesh’ (the Islamic State, formerly known as ISIS).”

Inside the Aleppo city council offices, bright red filing cabinets and a new coat of white paint mark a sharp contrast with the crumbling buildings and concrete slabs hanging precariously above streets where those left continue to go about their daily affairs as best they can.

‘’We have been hit many times, but we need to show that we will keep rebuilding,’’ one employee said.

Council chief Abdelaziz Al-Maghrebi, a former teacher and manager at a textile factory, walks with a limp from what he says was an injury from a tank bomb never properly treated.

The council has civil registry, education, legal affairs and civil defence directorates – and an office for electricity, water, sewage, and rubbish – but often receives no money from the ‘government-in-exile’, said Mohammed Saidi, financial manager of the council.

‘’The amount of money depends on the month, and no money was received from the SNC in July.’’

However, Saidi stressed, all reports of siphoning off of money by members ‘’are false’’.

Private donors and foundations play a large part in the council’s budget as well, and ‘’funding depends on the project proposals that are accepted’’, he said.

One of the recent proposals was for underground shelters, which the head of the civil defence directorate – established at the council only recently after long acting as an entirely volunteer force – told IPS had been granted four months ago, and 16 of which had since been built.

For medical needs, doctor Ibrahim Alkhalil, head of the Aleppo health directorate for rebel areas, said that as doctors and hospitals continue to be targeted, the location of medical facilities ‘’has to be kept confidential and change frequently’’.

The doctor, who is Syrian but who spent most of his professional career in Saudi Arabia and only came back after the uprising started, noted that everything was in short supply or lacking entirely: antibiotics, water, electricity and trained staff.

He added that the lack of maintenance for vehicles and the terrible road conditions meant that many people were dying simply from being unable to reach the few existing medical centres.

Moreover, the local council can afford to provide funds only to some medical facilities that do not receive any from other donors, council chief Al-Maghrebi told IPS.

Alkhalil pointed out, however, that no amount of supplies would solve the main problem if ‘’the regime isn’t stopped from killing and injuring in the first place.’’

A truck with lights switched off to avoid attracting regime aircraft attention often makes its way through the streets of a central neighbourhood at night, calling out ‘haleeb’, ‘haleeb’ (‘milk’).

A number of children in the area have been hit by snipers while crossing a street now ‘protected’ by a bullet-riddled sheet of canvas meant to reduce visibility.

In another area, Salahheddin – the ‘first liberated area of Aleppo’ and the very name of which retains a sort of mythical status in the eyes of some – children laugh and play soccer in the empty street near the frontline after nightfall. The blood of a boy hit by a sniper recently still stains the ground nearby.

Despite the constant risk of government snipers, IPS was told, near the frontlines was often the ‘’safest place, since it is too close to regime areas for them to drop barrel bombs on.’’

IPS was asked by a freckled, red-haired boy barely out of his late teens now working for a local Muslim, ‘’Why have you come here? What is there left to say?’’

The boy works to get charities abroad to help his organisation provide 50 dollars per month to the neediest widows and orphans of those killed in the fighting and for food packages.

A barrel bomb outside the charity’s offices killed a good friend and co-worker about 15 days ago. Sandbags are now stacked in front of windows and, according to another volunteer, over half of the staff left immediately after the incident, either for other parts of the country or for Turkey – or they simply no longer come to the office out of fear, a niqab-clad woman also working at the organisation said.

The charity has an underground bakery with which it normally provides bread to those in need, but its equipment had broken down a few days prior to IPS’s visit. It was unclear when it would be fixed, whether the spare parts needed could be brought into the city, and whether the regime might soon take the one road left in.