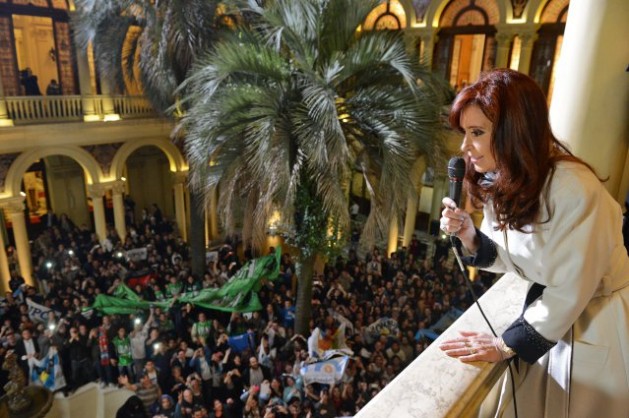 Argentine President Cristina Fernández addressing supporters in a courtyard in the government palace on Jul. 31, after giving a speech to the nation to explain the country’s debt payment situation. Credit: Casa Rosada

BUENOS AIRES, Aug 4 2014 (IPS) - Argentina’s supposed “default”, an unprecedented case in the history of world capitalism, sets a legal, political and financial precedent that indicates the need for concrete measures regarding the fine line between legal, ethical business activities and criminal usury.

In the debate, the orthodox financial sectors say Argentina’s failure to comply with U.S. Judge Thomas Griesa’s ruling means it has once again defaulted, while others argue that it has actually honoured its commitments and made its payments, and the fact that the funds have not reached the creditors is not the government’s fault.

“Preventing someone from paying is not default,” said President Cristina Fernández in a Jul. 31 nationally televised address, after a meeting with the so-called vulture funds – opportunistic investors who purchase the debt of heavily indebted countries at pennies to the dollar and then vigorously pursue full repayment in court – which failed to come up with a solution to the conflict.

“Now they invented a new term: ‘selective default’. It doesn’t exist. Preventing someone from taking our payments is not default. I told them they would have to invent a new word,” she said with irony.

At a Jul. 30 meeting in New York with Argentine officials, the mediator named by the U.S. court, Daniel Pollack, rejected Argentina’s offer to restructure the debt in the hands of “holdout” creditors – those who did not agree to the 2005 or 2010 debt swaps.

Since Argentina defaulted on nearly 100 billion dollars in debt in late 2001, during the worst economic crisis in the country’s history, 92.4 percent of the bonds have been restructured at a deep discount, with lower interest rates and at longer terms.

But a group of hedge funds that refused to participate in the two debt restructurings sued for full payment of 1.3 billion dollars in Argentine bonds in federal court in New York.

The offer made by Argentina in the Jul. 30 negotiations was for the holdouts to restructure their debt in conditions similar to those accepted earlier by the vast majority of creditors – under late president Néstor Kirchner (2003-2007) in 2005, and under his successor and widow Fernández in 2010.

Jul. 30 was the deadline to pay 539 million dollars in interest due on the discount bonds.

The Fernández administration had deposited the funds with the bond trustee, the Bank of New York Mellon (BoNY Mellon). But Judge Griesa blocked the payments to the bondholders because the Argentine government ignored his order to also pay the hedge funds.

”Unfortunately, no agreement was reached and the Republic of Argentina will imminently be in default,” Pollack said after the meeting in New York. “Default is not a mere ‘technical’ condition, but rather a real and painful event that will hurt real people.”

In an Aug. 1 court hearing, Argentina’s representatives unsuccessfully demanded that Pollack be removed as mediator, because of his remarks.

Some credit rating agencies lowered the rating on Argentina’s foreign currency bonds to “selective default”, while the judge avoided using that term in the Aug. 1 hearing but said it was clear that there had been no payments.

Argentine Economy Minister Axel Kicillof said “Argentina is not in default, because it has already paid. The bondholders did not pick up their payments because of a ban put in place by Judge Griesa.

“They talk about technical default, selective default — some have called it Griesa default, Griefault. No one knows what to call it because it is new, because it doesn’t exist, because no one would have thought that a judge could come along, and say – after the payment – ‘I’m going to order the banks to not meet their contracts.’ ”

Alejandro Drucaroff, a lawyer who specialises in banks and finance, pointed out to IPS that the debt swaps accepted by the vast majority of creditors “involved major discounts of capital and interest and very long terms for repayment.” But he also stressed that Argentina has punctually met all of its payments.

Some of the holdouts – the 7.6 percent of the creditors, who refused to accept the swaps that offered about 35 cents on the dollar – sold their bonds to hedge funds, two of which later sued in federal court in New York for full payment of 1.3 billion dollars in bonds, roughly one percent of the total debt.

The vulture funds acquired the bonds in 2008 at 20 to 30 percent of their nominal value.

In 2012 Judge Griesa ordered Argentina to pay the bonds at full-face value, plus interest and fees – some 1.5 billion dollars.

On Jun. 16, the U.S. Supreme Court rejected an appeal by the Argentine government, thus upholding the earlier ruling, which banned Argentina from making payments on the restructured debt unless it also paid the holdouts.

“That ban, which has no legal basis and goes beyond the judge’s legal authority, has no practical effect because Argentina met its payments anyway,” Drucaroff said.

But after BoNY Mellon was “warned” by Griesa that transferring the money to bondholders would violate his ruling, the bank held on to the funds.

“Griesa does not have the authority to keep Argentina from paying its debts to third parties not involved in the trial. Nor does he have authority over funds that aren’t from the U.S. – he can’t embargo them,” Drucaroff argued.

“There is no default; what this is, is an absolutely unprecedented legal situation,” the lawyer added.

“BoNY should be held accountable by the 92.4 percent of creditors and by Argentina for failing to comply with its function,” he said. “It could argue that it acted the way it did because it could be found guilty of contempt of court as a result of Griesa’s ruling – and in my opinion, in that case Griesa would also be responsible for preventing the money from reaching the creditors.”

According to University of Buenos Aires economist Fernanda Vallejos, the wording in the contracts makes it clear that a default would only occur “if Argentina didn’t pay.”

“However, the country not only has the will and the capacity to pay, but it has already paid and will continue to do so,” she added.

That, in her view, is independent of the credit rating agencies, “which in their eagerness to pave the way for the vulture funds to do business, because of the payment of default insurance, invent terms like ‘selective default’, which have nothing to do with reality or with Argentina’s financial solvency.”

The problem, the Argentine government says, are not the 1.5 billion dollars that the judge and the plaintiff are demanding payment of, but the fact that the debt would skyrocket if the bondholders that accepted a discount sued for repayment at full value as well.

The government said the debt could climb as high as 500 billion dollars in that case, which would throw the country back into a crisis similar to the one that triggered the 2001 default in the first place.

Political analyst Alejandro Horowicz said: “A plunge in our foreign reserves of that magnitude would not only affect international trade but would make the fixed exchange rate impossible to control and hence the rest of the reserves would face the same fate and would end up fleeing in a vain attempt to curb the stampede in the price of the dollar.”

Vallejo warned that the U.S. court ruling discouraged any process of debt restructuring by favouring “a small minority who represent the most savage face of international financial capital.”

“Who would accept a restructuring like Argentina’s if by bringing legal action in the courts of any country you can get that level of returns and repayment at full face value?” she asked.

The economist said an international regulatory framework is needed “that would preserve debt restructuring processes and put limits on the complete deregulation of the financial markets which trod roughshod over states and subjugate people.”

Vulture funds are already under scrutiny from governments and international bodies, among which there is a growing consensus that they should be reined in.

Nearly all of them “were involved in the latest international financial crisis [which broke out in 2008] by means of a range of speculative maneuvers that in many cases were actually illegal,” Drucaroff said.

“In theory a large part of the ‘formal’ financial system rejects them and sees them as running counter to business ‘ethics’. But no concrete step has been taken to curtail their activities which, to a large extent, are carried out through tax havens,” he said.

An area in which the question of whether Argentina defaulted or not is just one tip of the iceberg.