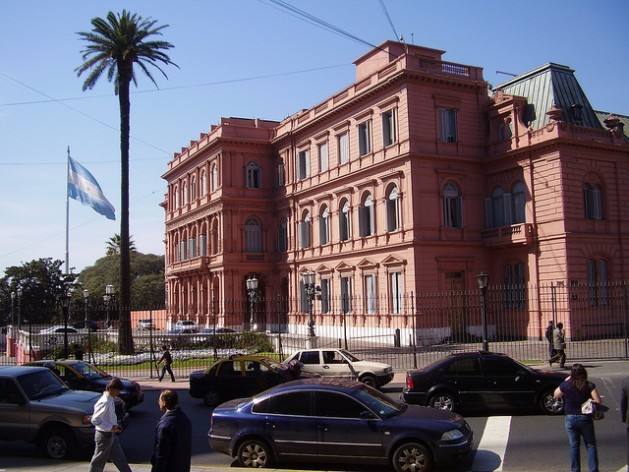 The Casa Rosada, the seat of the Argentine government, which is seeking to reopen a debt swap to overcome the legal action brought by “vulture funds”. Credit: Marcela Valente/IPS

BUENOS AIRES, Aug 29 2013 (IPS) - As a sign of Argentina’s willingness to repay its bondholders, President Cristina Fernández introduced a bill for a new swap of the foreign debt held by “holdout” creditors who refused earlier restructurings after the country’s late 2001 default.

This time around, most of the opposition backs the proposal.

In the initiative that the Senate began to discuss on Wednesday Aug. 28, the government seeks authorisation to reopen the debt restructuring process for a second time.

Although 93 percent of bondholders accepted the earlier restructurings, in 2005 and 2010, the remaining seven percent refused the offer of about 35 cents on the dollar, and insisted on full repayment.

Through the restructuring, Argentina renegotiated 90 billion dollars in debt.

The new swap, expected to be approved by Congress, would offer the same conditions as the previous deal. The difference is that it would be open-ended, whereas the earlier exchanges gave bondholders only a few months to swap their debt.

“Equity is a foundation stone of this debt restructuring process,” states the bill, which prohibits offering holdouts who have brought legal action more favourable treatment than those who did not do so.

The government initiative is in response to the Friday Aug. 23 ruling by the U.S. Court of Appeals for the Second Circuit in New York – the last step before the Supreme Court – that upheld an earlier decision that Argentina must pay the holdouts in full.

Fausto Spotorno, an economist with the Centre for Economic Studies, told IPS that the bill “is very reasonable.”

“They should never have closed the swap. But opening it now is a good political signal to the justice system and could get some more of the bondholders to agree to an exchange,” he said.

Spotorno said that if the case was accepted by the Supreme Court, a favourable verdict for Argentina was unlikely.

The hedge funds that sued in federal court in New York for full payment of 1.3 billion dollars in Argentine bonds had acquired them in 2008 at 20 to 30 percent of their nominal value.

They are known as “vulture funds” – opportunistic investors who purchase the debt of heavily indebted countries cheap and then sue for full repayment.

The bill presented by the Argentine government stresses that the holdouts who sued represent only a small portion of the unrestructured debt. It also points out that if they were paid 100 percent of the nominal value, as they are demanding, they would make a profit of 1,300 percent.

The bill also states that “it is common knowledge that our country is the object of ruthless legal attacks and heavy political pressure by these vulture funds.”

When she unveiled the proposal on Monday Aug. 26, centre-left President Fernández said the Aug. 23 U.S. court ruling was “unfair to our country” because it ignored the restructuring agreements reached with 93 percent of the bondholders.

She also said “we are serial payers, not serial debtors.”

Since the restructuring began, Argentina has serviced its debt punctually.

By 2003, the country’s debt represented 150 percent of GDP, the bill presented to the legislature states. The country has not had access to the global credit markets since 2002.

But as the economy began to recover from the 2001-2002 severe economic crisis, the debt situation began to improve as well.

According to the latest report by the Economy Ministry, as of late 2012 Argentina held 83 billion dollars in net debt, equivalent to 18.8 percent of GDP.

And with the payment of restructured bonds scheduled for September, the foreign currency denominated private debt to GDP ratio will drop to just 8.3 percent, Economy Minister Hernán Lorenzino said.

However, the country’s successful reduction of the debt burden is threatened by the small group of litigious hedge funds, which found their first ally in District Judge Thomas Griesa, who handed down the initial sentence in New York, in March.

The Aug. 23 ruling, which will be appealed by Argentina, dealt a blow to the restructuring process that Fernández’s late husband Néstor Kirchner, her predecessor, began while serving as president from 2003 to 2007.

If Argentina was forced to pay 100 percent of what the holdouts are owed in principal and accrued interest, the bondholders who agreed to the 2005 and 2010 restructurings could invoke the “most favoured creditor clause” and demand the same treatment.

Fernández also proposed that the voluntary debt swap invite holders of foreign-law bonds to exchange them for new debt that would be paid under Argentina’s local legislation, in order to evade eventual embargoes in case the Supreme Court upholds the Aug. 23 ruling.

The Radical Civic Union, the main opposition party in both houses of Congress, responded positively to the bill overall. But some of its leaders said the measure came too late, or contained overly critical language when referring to the holdout creditors and the judges.

“Argentina has to do whatever it can to get the Court to open the case and turn around the sentence,” PRO lawmaker Federico Pinedo told IPS.

He said it was necessary to act “responsibly and in a serious manner, and to send out a message that we want to ensure equal conditions for all of the creditors. That is an argument that holds a great deal of weight with the Court.”

Many legislators, including members of the governing Frente para la Victoria, believe it will be difficult to get the vulture funds to agree to any kind of swap. But they say it is necessary to show a willingness to restructure the debt – as long as it is under conditions set by Argentina.